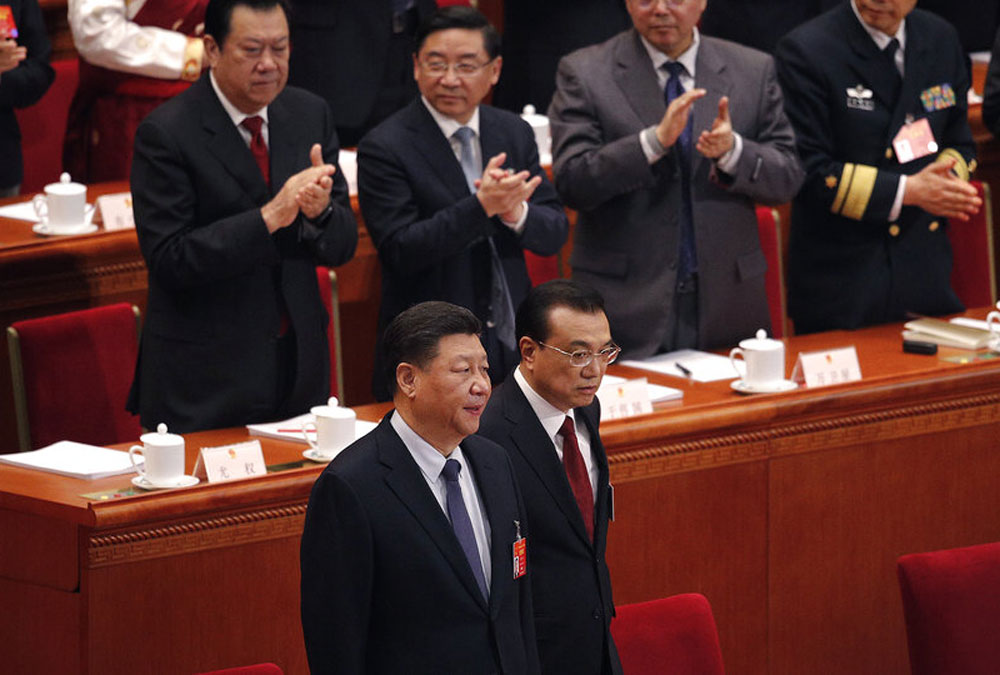 China announced a robust annual economic growth target and a 7.5 percent rise in military spending Tuesday as it convened an annual legislative session overshadowed by a tariff war with Washington.

Seeking to defuse US and European complaints the Chinese system is rigged against foreign companies, Premier Li Keqiang promised in a speech to the National People's Congress they will be 'treated as equals' with their Chinese competitors.

Li, the country's top economic official, set this year's growth target at 6 to 6.5 percent, reflecting a determination to shore up a cooling, state-dominated economy and prevent politically dangerous job losses. Slightly below last year's 6.6 percent growth, a three-decade low, it would be among the world's strongest if achieved.

The premier promised to 'promote China-US trade negotiations,' but gave no details of talks aimed at ending the fight with President Donald Trump over Beijing's technology ambitions and complaints it steals or pressures companies to hand over technology.

Li, No. 2 in the ruling Communist Party behind President Xi Jinping, pledged higher spending on development of technologies including artificial intelligence, electric cars, biotechnology and new materials that China's leaders see as a path to prosperity and global influence. He also promised more money for education, social programs and public works construction.

China's emergence as a competitor in smartphones, telecom equipment, solar power and other technologies has increased the range of products available to consumers and helped to drive down prices. But it rattles Washington and other governments that worry Chinese competition is a threat to their industries and employment.

Li warned the second-largest economy faces a 'graver and more complicated environment' and risks that 'are greater in number and size.'

The two-week gathering of the congress's 3,000-plus delegates in the cavernous Great Hall of the People is China's biggest event of the year. It does little lawmaking but serves as a platform to highlight the government's plans for the year.

President Xi Jinping's government is expected to use this year's session to announce tax cuts and more support for entrepreneurs who generate much of China's new jobs and wealth.

Legislators also are due to endorse a law that aims to ease tensions with Washington and Europe by discouraging officials from pressuring foreign companies to hand over technology.

Proposed tax cuts of up to 2 trillion yuan ($300 billion) would put 'significant spending power' in the hands of consumers and companies, helping to buoy sagging demand for autos, household appliances and other goods, Varathan said.

Spending on the Communist Party's military wing, the People's Liberation Army, will rise to 1.2 trillion yuan ($178 billion), according to a separate report issued by the finance ministry. China's total military outlay, the second-largest behind the United States, is estimated by independent experts to exceed $220 billion a year when off-budget expenses are added in.

The spending will pay to expand China's navy and acquire advanced aircraft and other weapons to help Beijing enforce its territorial claims in the South China Sea.

'It is more urgent for China to prepare for a trade war with the US, instead of a physical war,' Yue said. Military reforms are nearly complete, and 'China needs the money to be used for more urgent matters,' he said.

The tariff fight with Trump over Beijing's technology ambitions has rattled Chinese consumers and investors, prompting some to put off spending, which could add to downward pressure on economic growth.

News reports say Washington and Beijing might be close to an agreement to end the battle. But the chief US envoy, Trade Representative Robert Lighthizer, said earlier the two sides still had much work to do.

No agreements have been announced on the core of the dispute: US pressure on Beijing to roll back its plans for state-led creation of global competitors in robotics and other technology.

Washington, Europe and other trading partners say those violate China's market-opening obligations. Some American officials worry they might erode US industrial leadership.

It's unclear if Trump would be mollified by the technology measure, part of a law on foreign investment that state media say the Congress is due to endorse.

It would bar officials from using 'administrative measures' to pressure companies to hand over technology. Foreign business groups welcomed the proposal but said they need to see enforcement rules to know whether it will improve conditions.

Li tried to reassure investors by promising foreign companies will be 'treated as equals' with Chinese enterprises in a 'fair and impartial market environment.'

Foreign business groups and governments complain Beijing routinely violates its commitments under the World Trade Organization to ensure such equality, or 'national treatment.' They say rules on investment, technology licensing and other facets of business discriminate against foreign companies or shield Chinese enterprises from the competition.

Xi and other Chinese leaders have announced changes over the past year including tariff cuts on imported consumer goods and plans to allow full foreign ownership in auto manufacturing. But business groups say those have little impact on operating conditions.

Beijing faces a WTO challenge filed in July by the European Union against technology licensing rules the 28-nation trade bloc said improperly hamper the ability of foreign companies to protect and profit from their technology.

Li promised 'competitive neutrality,' or equal treatment of state-owned and private companies by regulators. But he gave no details of how far that might extend for foreign competitors.

'Enterprises under all forms of ownership will be treated on an equal footing,' the premier said.