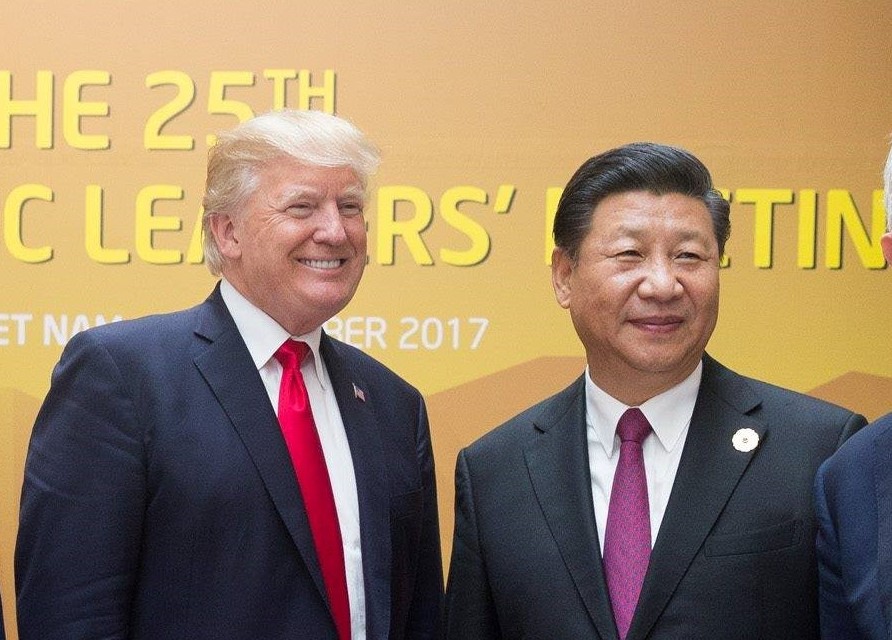 US president Donald Trump with Chinese president Xi Jinping in 2017. In 2019, the US will likely escalate its strategic offensive against China through tariffs, sanctions, stronger backing for Taiwan and a more assertive posture in the South China Sea
Wikimedia Commons
Anil Wadhwa   |   Published 08.01.19, 02:50 AM

The changing relations between the United States and China will drive the primary geopolitical challenges in 2019 in the Indo-Pacific. India, Japan, Australia, Iran, Saudi Arabia and the Russian Federation will also all contribute their bit to the region’s evolving security matrix. The US will likely escalate its strategic offensive against China through tariffs, sanctions, regulatory buffers around emerging technologies, stronger backing for Taiwan and a more assertive posture in the South China Sea. For this, it will rely on countries like Japan, Australia, South Korea and Taiwan to erect stronger barriers to Chinese investment.

Another issue still under the radar that could emerge forcefully between US and China is Tibet. In the first months of 2019, the US and China will have to find an adjustment with reference to the effects of the “Reciprocal Access to Tibet Act” which was signed by President Trump at the end of 2018. This act promotes access to Tibet by US diplomats, journalists and citizens and denies US visas to Chinese officials considered responsible for blocking access to Tibet.

Meanwhile, China will push its Belt and Road Initiative (BRI) projects and try to find new partners and export markets through this initiative. China will seek to temper potential partners’ concerns regarding financial stability, political influence and national security threats by attracting third-party investors. It will also attempt to undermine US efforts by working with countries like Japan and India along with the European Union and will consolidate its relations with Iran and Russia.

The trade tensions between US and China are not just commercial but also strategic. These tensions mark a battle for technological supremacy that will play out in various countries and regions of the world but especially in the Indo-Pacific. China will feel the heat but Beijing has the determination and is canny enough to accelerate its efforts toward reaching parity with the US.

In order to implement its declared policy of pursuing open-sea lines of communication in the South China Sea through which 50 percent of world trade passes, and its open airways, the US will likely continue to take various actions in 2019. Accordingly, the US will bolster its naval presence in the South China Sea and Taiwan Strait, and further challenge the ‘One China’ principle by elevating the status of Taiwan at international meetings and regularizing arms sales, naval patrols, and high-level visits.

On the final day of 2018, President Donald Trump signed a law which refers to the Quadrilateral Security Dialogue between US, Australia, India and Japan. He called the new law “vital to address pressing security challenges in the Indo-Pacific region in order to promote a rules-based order, respect for international law, and a free and open Indo-Pacific.”

In response, the world can expect China to strengthen its naval and air presence to assert its territorial claims, increasing chances of accidents involving the US defence forces. A US naval port call in Taiwan would trigger a more direct Chinese response. In a speech January 2 marking the 40th anniversary of a call by Beijing to end military confrontation across the Taiwan Strait, Chinese President Xi Jinping said unification was key to “national rejuvenation”. Xi went on to say “the political division across the Strait cannot be passed on from generation to generation”, signaling his determination to end the separation between Taiwan and mainland China. Xi also said “Taiwanese independence should not be tolerated and representatives from both sides should start in-depth democratic consultations for a cross-Strait relationship and the future of the Chinese nation” and reach transitional arrangements for the peaceful development of cross-Strait ties.

Japan, India and Australia will increase security cooperation with the US, but they are likely to refrain from joining US Freedom of Navigation Operations in the South China Sea or patrols in the Taiwan strait. The US will push for an enhancement of its military exercises with ASEAN and Vietnam in order to limit growing Chinese influence in the region.

The China–US confrontation is likely to continue in the future even though interim compromises may be reached on trade issues. This will open up opportunities for other countries like India. It will, therefore, be India’s endeavour to manage its relationship with China. Even as India manages its tensions with China at the tactical level, its strategic competition with Beijing for naval berthing and basing rights, infrastructure projects and defence partnerships will play out across the Indian Ocean.

To bolster its position in the Indo-Pacific, India will move to strengthen relations not only with the US but also with Japan and Australia using a bilateral, rather than a multilateral approach, with emphasis on building its relationship with Japan. At the same time, to maximise its strategic autonomy, India will safeguard its relationship with Russia. India will focus on technology transfers from key weapons suppliers, especially from US and Russia. New governments in Bhutan, the Maldives and Bangladesh, and a restored government in Sri Lanka -- all of which have subscribed to China’s BRI -- will lead India to renew and redouble its engagement with them. China’s expansion into South Asia under its BRI will continue to make India seek to safeguard its supply routes that form the lifeblood of its trade.

In Afghanistan, the US will use a mix of military pressure on the ground and diplomatic pressure on Pakistan to bring the Taliban to the table. Pakistan, Russia and Iran will use the threat of Islamic State to strengthen their security partnership. The US is likely to run out of pressure tactics such as cutting off funds and Pakistani officers’ training and limiting defence sales. It’s then likely to impose harsher measures such as revoking Pakistan’s non-NATO major-ally status unless it delivers. In this context, Pakistan’s role will gain in importance.

The Afghan army is not strong enough to handle security on its own, but the US is likely to pull out partially from Afghanistan before the elections which have already been postponed once. In Pakistan, Imran Khan will remain dependent on the army, which can engineer defections if he resists, bringing about a collapse of the government. It’s unlikely that any new initiative for rapprochement will be undertaken before India’s elections since the issue of Pakistani abetment of cross-border terrorism remains a sore point. India will also wait till the elections are over before concluding a deal on the Regional Comprehensive Economic Partnership (RCEP) since it has a trade deficit with 10 of the 16 countries in RCEP and its deficit with China is the largest and growing.

The two Koreas have always dreamt of cooperation and physical linkages. Road and rail connections, joint management of fisheries, fostering tourism linkages, reopening of Kaesong industrial zone and building a trans-Korean pipeline from Russia are projects which will be pursued. Efforts to make headway in the face of US-led sanctions will continue in 2019. The US will follow up on the initiatives launched in 2018 with Pyongyang for further normalisation of relations based on North Korean denuclearisation and dismantling of its missile programme. This will not be easy because the interests of US and China do not coincide on this issue.

The US is intent on extracting tangible concessions from North Korea in 2019 but North Korea will also hope that it can squeeze out economic concessions from the Trump administration. Given the high stakes, neither side is likely to scuttle the dialogue, but North Korea will expect tangible economic concessions or a peace agreement before it takes concrete action on its pledges to move towards disarmament. The United States will hesitate to extend an economic lifeline to North Korea by lifting sanctions, but time is on the side of North Korea as the international consensus on maintaining sanctions will likely to unravel if many months pass by without much progress. The US will likely threaten transgressors with secondary sanctions. Inter-Korean rapprochement also will not be able to advance beyond a point without exceptions from sanctions -- which the US will only approve after careful consideration. This will leave room for China to extend its influence on the Korean peninsula. Overall, North Korea will still maintain control of many elements of its nuclear programme at the end of 2019.

Although Russia and Japan will continue to negotiate over the disputed Kuril Islands, a larger stand-off between Russia and the West will make it unlikely to reach a deal with Japan. As it tries to chip away at the US regional alliance structure, China will continue it conciliatory outreach to Japan, India and the ASEAN, through efforts at dispute resolution and economic partnerships while also making overtures to Australia, where elections due in April could foster some rapprochement.

The US still influences the geopolitical and geostrategic dynamics in the Middle East to a large extent, but it will feel the influence of Russia and Iran. Frictions between Iran and US will escalate and a common agenda opposing Iran will help in preserving and insulating the strategic, high-level ties between US and Saudi Arabia despite rumblings within the royal family and other governments over Saudi Crown Prince Mohammed bin Salman’s leadership. US actions towards Iran and how the nuclear Joint Comprehensive Plan of Action (JCPOA) is handled will determine a number of trends in the volatile Middle East region. Even the US will need to tread carefully, given Russia’s rising influence in the region.

Anil Wadhwa is former secretary (east) in the Ministry of External Affairs and former ambassador to Italy, Thailand, Oman and Poland. This article is reproduced with permission from the Vivekananda International Foundation.

The Trump administration's China trade policy is confusing everyone