Will confront the profound economic crisis with compassion and lead a government of integrity, professionalism and accountability, says the new prime minister 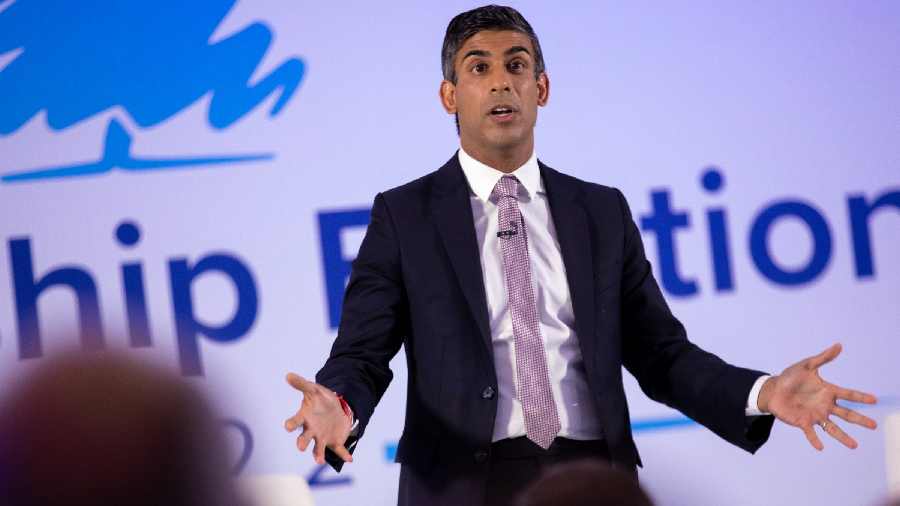 Rishi Sunak on Tuesday took charge as Britain's first Indian-origin Prime Minister with a promise to fix recent "mistakes" after an audience with King Charles III, a day after he was elected the new leader of the Conservative Party in a historic leadership run.

In his first address at the doorstep of 10 Downing Street in London, the new Prime Minister said that he takes over at a time when the UK is facing a "profound economic crisis" as it deals with the aftermath of COVID and the Russia-Ukraine conflict and asserted that he is "not daunted by the high office he has accepted and hopes to live up to its demands.

"Some mistakes were made; not borne of ill-will or bad intentions but mistakes nonetheless and I have been elected as leader of my party and your Prime Minister in part to fix them," said Sunak, the second prime minister in as many months and the third this year.

"I will unite our country not with words but with action. I will work day in and day out to deliver for you," he said.

Sunak warned of "difficult decisions to come" and pointed to his record as chancellor of exchequer during the pandemic to promise that he will bring that "same compassion to the challenges ahead.

"I stand here before you ready to lead our country into the future, to put your needs above politics, to reach out and build a government that represents the very best traditions of my party. Together we can achieve incredible things. We will create a future worthy of the sacrifices so many have made and fill tomorrow and every day thereafter with hope," he said.

On a somewhat defiant note to address the Opposition clamour for a general election, he stressed that the mandate the Conservative Party won in the 2019 general election is not the sole property of one person with reference to former Prime Minister Boris Johnson but "a mandate that belongs to and unites all of us".

"Congratulations to @RishiSunak on this historic day, this is the moment for every Conservative to give our new PM their full and wholehearted support." Johnson tweeted.

Earlier in the day, outgoing Prime Minister Liz Truss chaired her final Cabinet meeting at 10 Downing Street before making her way to Buckingham Palace to formally tender her resignation to the 73-year-old monarch.

Sunak then arrived at the palace for his meeting with the King, who then invited him to form a government as the UK's 57th Prime Minister and the third in just seven weeks.

"The King received in Audience The Right Honourable Rishi Sunak MP today and requested him to form a new Administration. Mr Sunak accepted His Majesty's offer and kissed hands upon his appointment as Prime Minister and First Lord of the Treasury, the palace statement said.

As the former chancellor made his first prime ministerial address on the steps of 10 Downing Street, he was not joined by his wife Akshata Murty and daughters Krishna and Anoushka as was expected. He then went in for meetings with officials at 10 Downing Street to start finalising his Cabinet, starting with the key roles of Chancellor, Foreign Secretary and Home Secretary.

Sunak describes himself as a proud Hindu . His victory on Diwali has resonated among the Indian diaspora groups across the UK, who have hailed it as a historic moment in British social history.

Rishi Sunak becoming the first British Indian Prime Minister is an historic moment. This simply would not have been possible even a decade or two ago, said Sunder Katwala, Director of British Future think-tank.

"But we should not underestimate this important social change. When Sunak was born in Southampton in 1980, there had been no Asian or black MPs at all in the post-war era. There were still no black or Asian Conservative MPs when he graduated from university in 2001. That Rishi Sunak is set to be Prime Minister during the coronation of King Charles III next spring tells an important story about our society, where we have come from and where we are going in the future, he said.

The Archbishop of Canterbury urged Britons to pray for Rishi Sunak as he enters No. 10 Downing Street at a turbulent time.

"At a time of great difficulty and uncertainty for this country, please join me in praying for Rishi Sunak as he takes on the responsibilities of leadership," Justin Welby wrote on Twitter.

"May he, and all leaders of all parties, work across divides to bring unity and offer stability for those who need it most," he said.

Sunak's victory in the Tory leadership race came at the end of a dramatic few days in Westminster since Liz Truss resigned last Thursday in the wake of a disastrous tax-cutting mini-budget and several policy U-turns.

Former prime minister Johnson ruling himself out from the contest over the weekend and Leader of the Commons Penny Mordaunt conceding defeat just moments before the shortlisting deadline on Monday paved the way for a remarkable political comeback for Sunak having lost the Tory membership vote to Truss just last month.

However, his popularity as the frontrunner among his party colleagues was replicated yet again as more than half the Tory MPs came out publicly in his support. He now faces the enormous challenge of steering the UK economy through massive inflationary turbulence and also uniting the different wings of a divided Conservative Party.