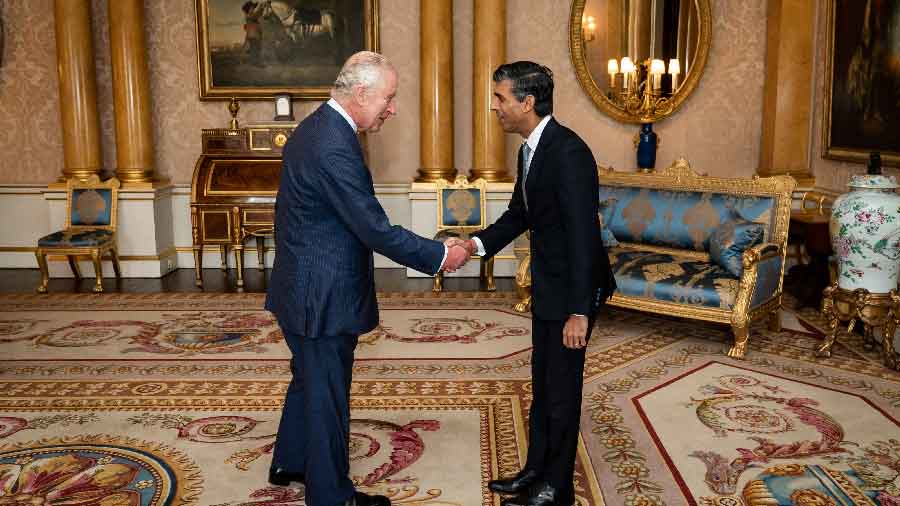 Rishi Sunak on Tuesday scripted history when he was appointed by King Charles III as Britain's first Indian-origin Prime Minister after being elected unopposed as the new leader of the governing Conservative Party on Diwali.

The 42-year-old former Chancellor of the Exchequer, a devout Hindu, is the youngest British prime minister in 210 years. He is also the first Hindu Prime Minister of Indian heritage in the UK, reports PTI.

In his first address as Tory leader soon after the result was declared on Monday, Sunak said his priority would be to bring the country together and said he was "humbled and honoured" to get the greatest privilege of his life to give back to the country I owe so much.

"The UK is a great country, but there is no doubt we face a profound economic challenge," said Sunak, with reference to the economic turmoil he is inheriting following former prime minister Liz Truss' disastrous tax-cutting mini-budget last month.

Sunak, the second prime minister in as many months and the third this year in Britain, will be moving into 10, Downing Street at a time when Britain's economy is facing a triple whammy of slowing growth, high inflation triggered by spiralling energy prices in the wake of the Ukraine war and a budget shortfall that has eroded its financial credibility internationally.

His first task will be to restore Britain's international financial credibility after outgoing leader Truss's plan for unfunded tax cuts and a costly energy price guarantee spooked the bond market.

He will have no option but to raise tax rates and make spending cuts that will be unpopular and may have unforeseen political consequences.

Sunak faced a risk till the last moment because under the rules of the contest the candidates who received the support of more than 100 MPs could move forward to the second stage of the contest where they could seek the support of around 160,000 Conservative Party members around the country. Mordaunt’s exit has ended that threat.

But soon, most of the party’s senior leaders had lined up behind Sunak. Former home secretary Priti Patel who had supported Johnson till he pulled out, today declared she was backing Sunak. Similarly, Suella Braverman, who resigned as home secretary last week, also came out for Sunak. Nadhim Zahawi, who was briefly chancellor of the exchequer in the dying days of the Johnson government, switched to backing Sunak after the former prime minister dropped out of the race.

Sunak, 42, has risen meteorically in politics and only entered parliament for the first time in 2015. He won the seat in Richmond, Yorkshire which has always been regarded as a very parochial part of the country where outsiders get a cool reception.

In the last few months, Sunak came under intense attack because his billionaire wife Akshata Murthy claimed what’s called ‘non-dom’ status under which she pays lower taxes in the UK. Akshata is the daughter of Infosys founder N. R. Narayana Murthy. She and Sunak met when they were studying at Stanford.

The former chancellor of the exchequer was also disliked strongly by Johnson supporters because of the perception that he stabbed the former prime minister in the back and caused Johnson’s downfall by resigning at a crucial moment.

Sunak reckons he gained a new perspective on life and the world of business by studying at Stanford, surrounded by tech start-ups. In a speech recently, he talked about the influence living in California had on him. “I studied and worked in California, surrounded by Silicon Valley start-ups, living and breathing that entrepreneurial culture,” pointed out. He added crucially: “If we want to drive up future growth and productivity, then the highest of the three priorities should be to ensure the UK economy is the most innovative in the world.

Soon after graduating Sunak joined Goldman Sachs. Students who were at university with him told The Times he had always appeared more interested in finance and banking than in politics.

Sunak’s family story is also slightly different from the normal immigrant one in the sense that his grandmother was the first person who headed to Britain and worked as a bookkeeper and then sent for her husband and three children one year later. Sunak’s parents were born in Tanzania and Kenya.

Like true immigrants, both Sunak’s parents worked hard to be able to send him as a day-scholar to Winchester, one of the country’s leading public schools. His mother ran a pharmacy and his father was a doctor. The young Sunak frequently spent weekends helping out at his mother’s pharmacy.

Though Sunak has faced an element of racism during his race to the top, there’s no question that his rise shows just how much Britain has changed in the last 60 years. In 1968 Enoch Powell made his famous "Rivers of Blood" speech, which denounced immigration. More recently, in 1989, cabinet minister Norman Tebbit suggested a ‘loyalty test’ under which immigrants should be asked which cricket team they supported: England or India/Pakistan. Tebbit himself admits those days are now long gone.

Most recently, the last three chancellors of the exchequer – even if they had brief terms – have been non-white. Sunak was followed by Iraqi-born Nadhim Zahawi for a few weeks before Johnson resigned. He was then followed by Kwasi Kwarteng, who attempted to introduce far-reaching changes in the UK economy but then found himself sacked by his ally and friend Liz Truss.

Similarly, the current foreign secretary who represents Britain internationally is the non-white James Cleverly. And the last two home secretaries have been Indian-origin women Braverman and Priti Patel.

Of course, Sunak won’t be the first Indian-origin prime minister in Europe. Leo Varadkar was the Irish taoiseach or prime minister and he is currently the taniste or deputy prime minister. And Portugal’s Prime Minister Antonio Costa’s family was originally from Goa.

Sunak has my full support: Truss