In the new reality of the U.S. Arctic, open water is the November norm for the Chukchi 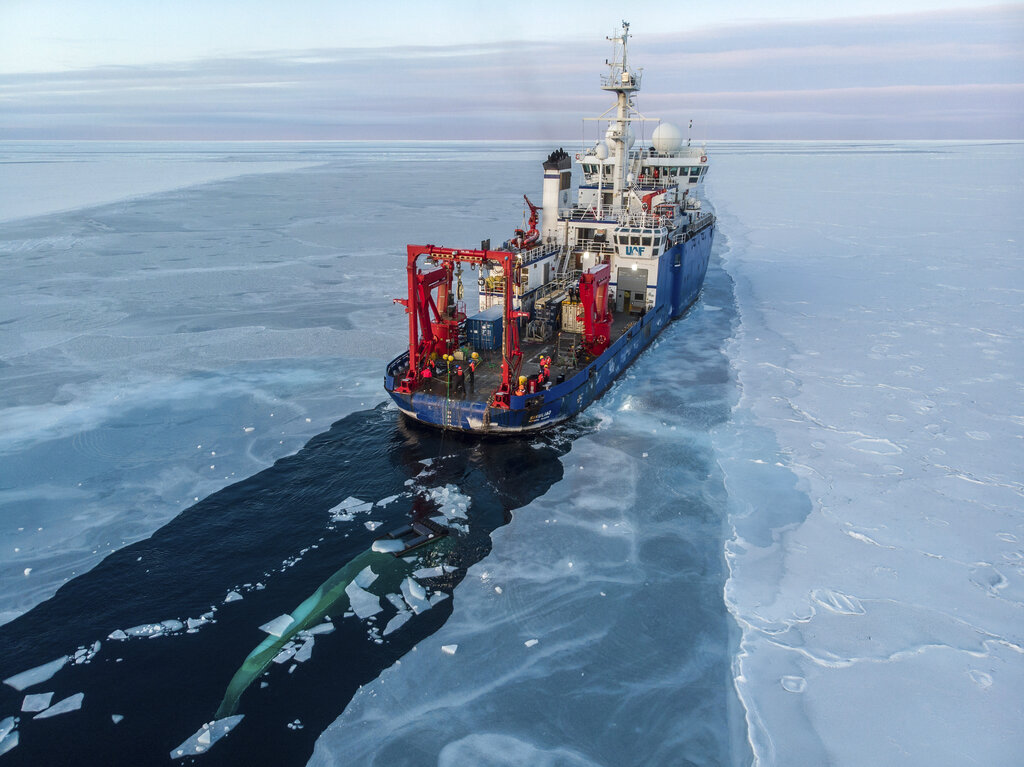 The U.S. research vessel Sikuliaq can break through ice as thick as 2.5 feet (0.76 meters). In the Chukchi Sea northwest of Alaska this month, which should be brimming with floes, its limits likely won’t be tested.

University of Washington researchers left Nome on Nov. 7 on the 261-foot (79.5-meter) ship, crossed through the Bering Strait and will record observations at multiple sites including Utqiaġvik, formerly Barrow, America’s northernmost community. Sea ice is creeping toward the city from the east in the Beaufort Sea, but to find sea ice in the Chukchi, the Sikuliaq would have to head northwest for about 200 miles (322 kilometers).

In the new reality of the U.S. Arctic, open water is the November norm for the Chukchi. Instead of thick, years-old ice, researchers are studying waves and how they may pummel the northern Alaska coastline.

“We’re trying to understand what the new autumn looks like in the Arctic,” said Jim Thomson, an oceanographer at the UW Applied Physics Laboratory.

Chukchi sea ice in early November was at its lowest level on record, said Rick Thoman, a climate expert at the University of Alaska Fairbanks’ International Arctic Research Center and a former forecaster for the National Weather Service.

Low ice is a problem for people of the coast. Communities north and south of the Bering Strait rely on near-shore ice to act as a natural sea wall, protecting land from erosion brought on by winter storms. 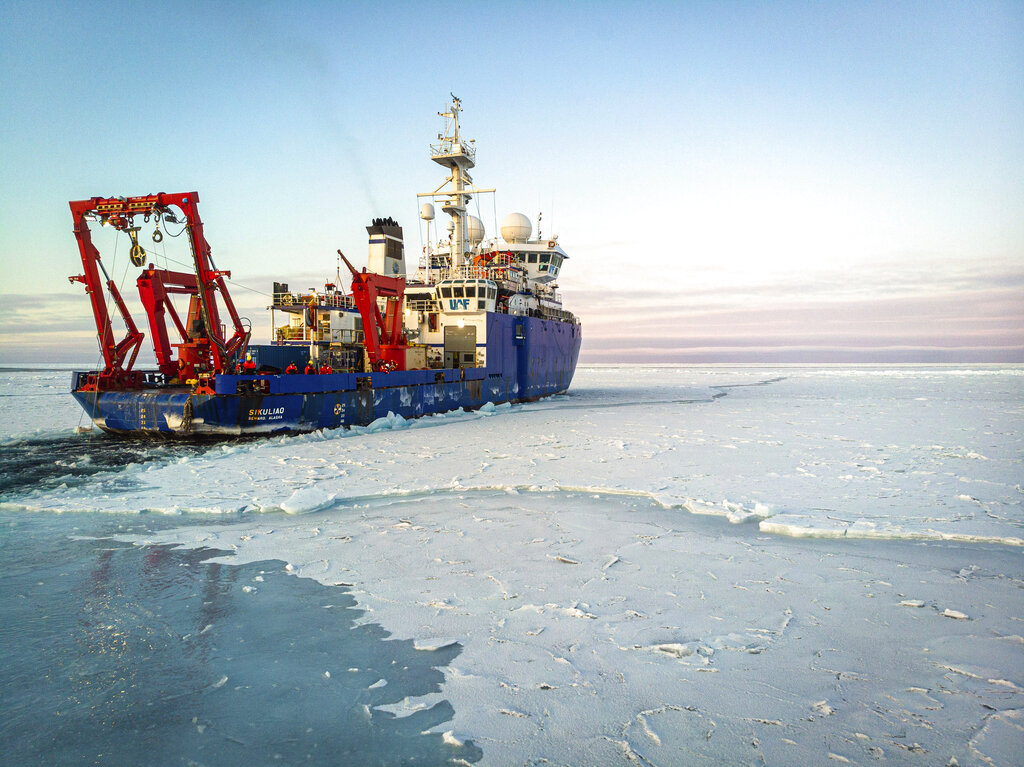 In this Nov. 14, 2019 photo provided by John Guillote and taken from an aerial drone shows the research vessel Sikuliaq as it makes its way through thin sea ice in the Beaufort Sea off Alaska's north coast.
AP

Sea ice is a platform from which to catch crab or cod in Nome, a transportation corridor between villages in Kotzebue Sound and a work station on which to butcher walrus near Gambell.

Sea ice is also a one of the most important physical elements of the Chukchi and Bering seas. The cold, salty water underneath ice creates structure in the water column that separates Arctic species from commercially valuable fish such as Pacific cod and walleye pollock. When sea ice melts, it creates conditions important for the development of microorganisms at the base of the food web.

And then there’s wildlife. Sea ice is the prime habitat for polar bears and the preferred location for dens where females give birth. Female walruses with young use sea ice as a resting platform and follow the ice edge south as it moves into the Bering Sea.

The formation of sea ice requires the ocean temperature to be about 28 degrees (-1.8 C), the freezing point of saltwater. Historically, ice has formed in the northernmost waters and been moved by currents and wind into the southern Chukchi and Bering seas, where it cools the water, allowing even more ice to form, said Andy Mahoney, a sea ice physicist at the University of Alaska Fairbanks’ Geophysical Institute. 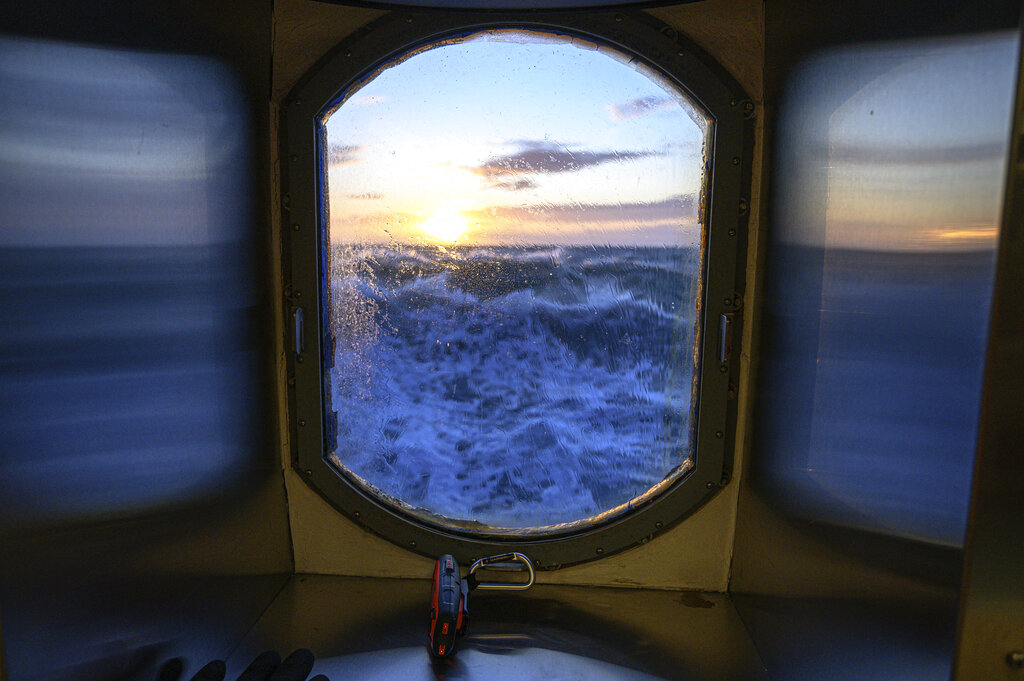 This Nov. 8, 2019, photo provided by John Guillote shows a view from the main lab of the Sikuliaq in the Chukchi Sea.
AP

Forecasters 20 years ago took it as a given that the water temperature would be cold enough to form sea ice.

“Even at the end of summer you couldn’t get enough heat into the ocean to raise the water temperature significantly above freezing,” Mahoney said. “So it didn’t take much cooling to cool the ocean down to the freezing point.”

Climate warming has brought a harsh new reality. High summer temperatures have warmed the entire water column in the Bering and Chukchi seas. Water temperature from the surface to the ocean bottom remain above normal, delaying ice formation.

“We’ve got a cold atmosphere. We’ve got a strong wind. You’d think we’d be forming ice, but there’s just too much heat left in the ocean,” Mahoney said. 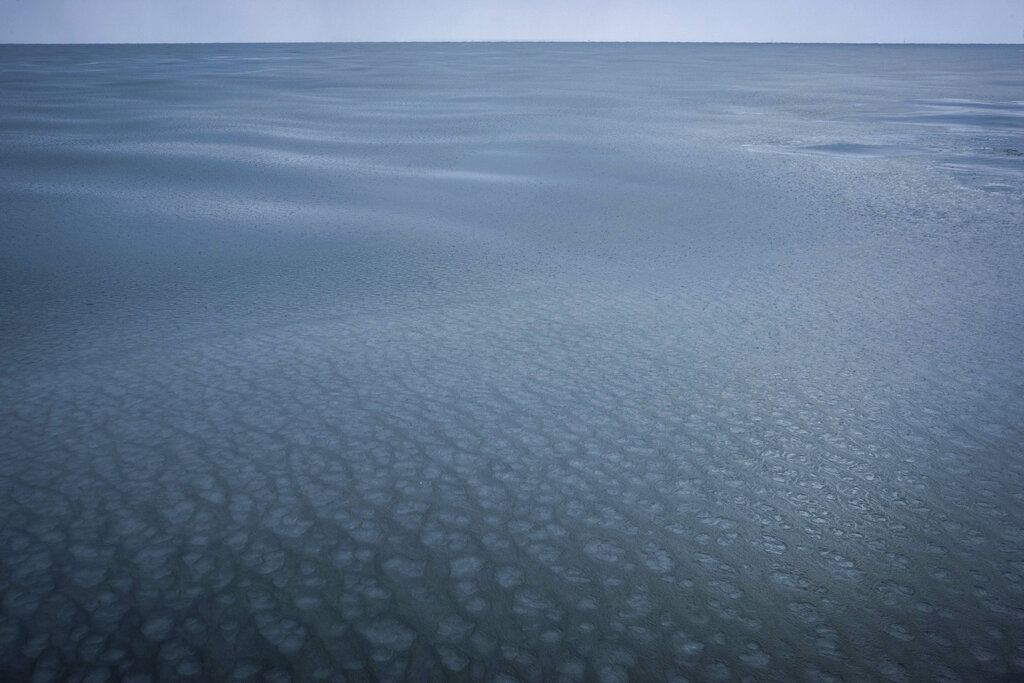 This Nov. 12, 2019, photo provided by John Guillote shows a view from the research vessel Sikuliaq near Jones Island in the Beaufort Sea.
AP

Thomson and other scientists on the Sikuliaq will look at how the changes could affect coastlines, which already are eroding. Less ice and more open water translates to a significant threat. Ice acts as a smothering blanket, keeping down the size of waves. Open water increases fetch, the distance over which wave-generating winds blow.

“We know from other projects and other work that the waves are definitely on the increase in the Arctic,” Thomson said.

That means even more erosion, the chance of winter flooding in villages and increased danger to hunters in small boats and longer distances for them to travel to find seals and walruses.

Forecasting sea ice is notoriously difficult but Thoman, the ex-weather forecaster, said he expects a less than robust year for sea ice.

“Maybe the horizontal extent conceivably gets up to normal, but it has to be extremely thin and it will be subject to rapid melting if we get into a stormy period in the winter or spring,” Thoman said. “And even if that doesn’t happen, because it’s thinner, it means it’s going to melt out sooner come next spring.”