There are some 40 large units in South 24-Parganas and East Midnapore, catering to the livelihood of around one lakh fishermen and traders 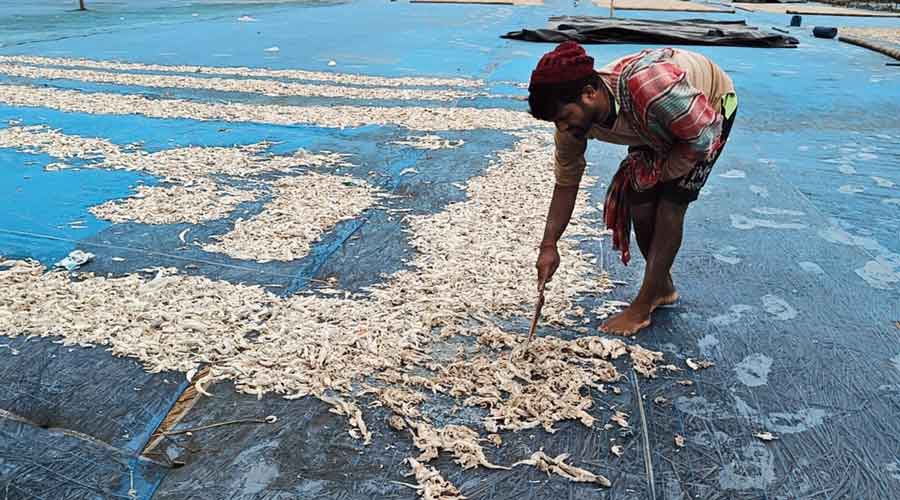 Around one lakh fishermen and businessmen involved in the trade of dry fish in the coastal districts of South 24-Parganas and East Midnapore are staring at huge losses owing to the untimely December downpour triggered by Cyclone Jawad, prompting the state government to assess the damage and work out a compensation plan.

“Dry fish traders have faced huge losses because of the heavy rainfall, which is uncommon in December. We have directed our officials to be on the ground to assess the losses. We have called a meeting on December 14 to discuss the role of the government to help the affected fishermen and traders and find ways to compensate them,” fisheries minister Akhil Giri said on Thursday.

Dry fish trade is a major driver of the economy in the two coastal districts. There are some 40 large units in South 24-Parganas and East Midnapore, catering to the livelihood of around one lakh fishermen and traders. People involved in the trade said tonnes of fish kept to dry had gone bad in the rain between December 5 and Thursday afternoon.

“We usually dry fish from November as the chance of rain recedes by then. We did not expect such heavy rain in December, the peak time for our business. We had to throw away rotten fish. I will incur losses of no less than Rs 10 lakh,” said Rabiul Islam Shah, a trader of Baliara, South 24-Parganas.

An official in the state fisheries department said the process to assess the losses began although rain continued to lash coastal districts on Thursday.

He said the estimated loss to the dry fish trade would be no less than Rs 200 crore.

Amin Sohel, president of a dry fish traders’ association in Contai, East Midnapore, said they desperately needed government help as the losses were “too heavy”.

Officials in the fisheries department said the annual volume of the dry fish business in Bengal was Rs 800 crore.

Fishermen dry the produce under the open sky on sea beaches for up to 12 days at a stretch before they are packed for export to Bangladesh, Nepal and Bhutan. Traders in South 24-Parganas also sell their produce to Assam, Mizoram and Manipur.

“December rain has hit the dry fish business hard. We plan to set up a permanent storehouse in Sagar and Kakdwip and will take up the issue with higher-ups,” said Jayanta Pradhan, additional director of fisheries (marine), South 24-Parganas.