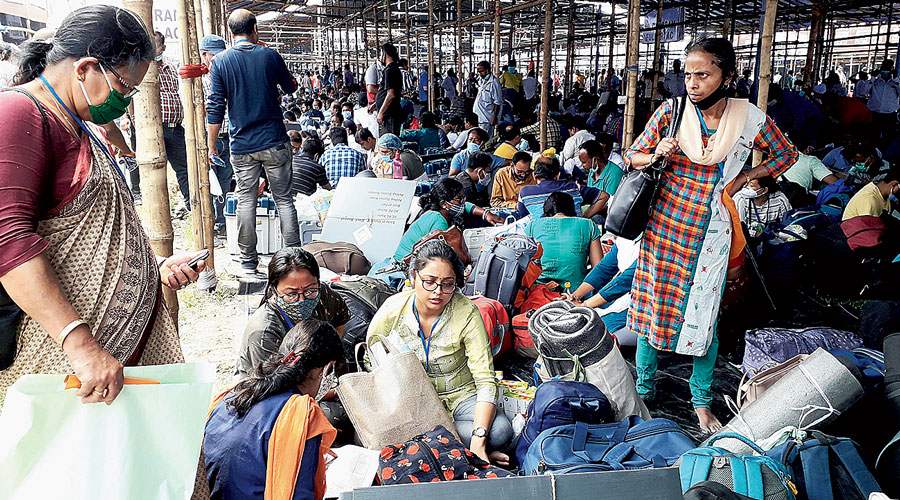 Polling personnel for three highest booths of Darjeeling district, which are located at an altitude of 12,000 feet, reached their destinations on Thursday, a day ahead of the polling staff of other booths.

According to sources in the district administration, these booths have been set up in Srikhola Primary School, Daragaon Junior High School and Rammam Forest Primary School, all under Darjeeling Assembly seat where elections would be held on Saturday.

“Altogether, there are 2,271 voters in these three polling stations. Like other voters of the district, they will also cast their votes on Saturday. But considering the locations of these booths, we have to send polling staff two days ahead of vote day so that they get adequate time to make preparations,” said an official.

He said these primary schools are almost 100km away from Darjeeling town. The polling teams need to travel for around six hours by road to reach the booths.

“Even a few years back, the teams would reach Rimbick, which is around 80km from Darjeeling, by road. From there, they would have to take pony rides. Things have improved now as motorable roads have been made to connect these locations,” the official added.

Altogether, 12 polling personnel, along with security forces, have been sent to these three polling stations on Thursday.

Darjeeling district administration and the police are making all necessary arrangements to conduct elections in its five Assembly seats.

In Darjeeling district, around 12.39 lakh voters will cast their votes in 1,413 polling stations spread across three subdivisions, Darjeeling, Kurseong and Siliguri.

“All preventive measures have been taken for a free and peaceful election. The personnel of central paramilitary forces have been deployed in different areas. They are conducting route marches in different corners of the district and will also man the booths. Also, the state police will be there to manage the law and order situation,” said a police officer.

In the district, 96.5 companies of paramilitary forces would be deployed on the poll day, along with 4, 441 personnel of the state police. In neighbouring Kalimpong district, where polls would be held in the sole Assembly seat on Saturday, 2.09 lakh voters will exercise their right in 302 booths.