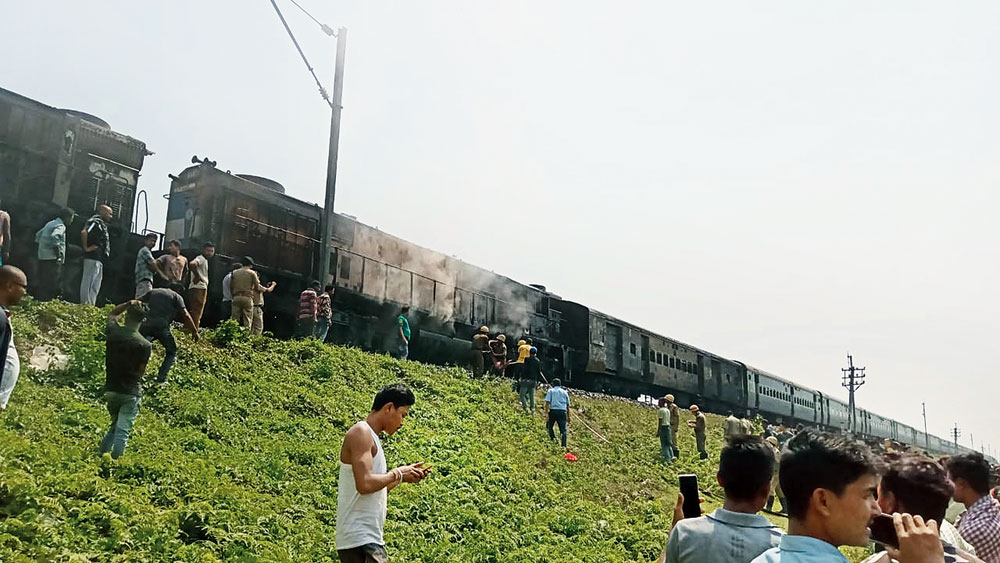 Smoke billows out of the engine at Chaterhat, near Siliguri, on Friday
Picture by Passang Yolmo
Bireswar Banerjee And Anirban Choudhury   |   Siliguri   |   Published 22.03.19, 08:12 PM

Two persons died after an engine of a long-distance train caught fire near Siliguri on Thursday, with rail officials suspecting the duo jumped off in panic after spotting the blaze that has been blamed on a fuel-tank leak.

Rail officials said they believe the two men — who could not be identified till late on Friday night — had leapt out of the Chandigarh-Dibrugarh Express after smoke and suffocation in a general compartment attached close to the engine.

“Both had multiple fractures and head injuries but no burns,” said a rail official, adding the bodies were kept at North Bengal Medical College and Hospital in Siliguri.

At least one more passenger was hurt but officials said the injuries were not serious.

The train’s 20 bogies had around 2,000 passengers and there were no reports of any other serious injuries.

“Preliminary investigations indicate there was some leakage from the oil tank of the Assam-bound train’s engine,” said as senior railway official.

The express was near Chaterhat station, around 28km from Siliguri, when the incident took place.

The chief commissioner of railway safety will conduct a probe.

A device from a portion of the engine came off and was dragged along the tracks before the driver pulled the brakes. The train was running at a speed of over 50kmph.

By then, the fire had spread to a luggage van next to the engine. But it did not spread to the other compartments, said an official of the Northeast Frontier Railway.

The train was stopped near Chaterhat. Four fire engines from Siliguri were rushed to the spot and the flames were doused after an hour.

“A relief train, which included a fire protection and medical team was rushed (from NJP station) to the site. The unaffected coaches were taken to Chaterhat station with the help of another engine and then taken to NJP,” said P.J. Sharma, NF Railway’s chief public relations officer.

The Railway Board has handed the probe to the commissioner of railway safety, he added.

The Chandigarh-Dibrugarh Express is a biweekly superfast express that covers 2,661km. After the blaze stopped the train, the passengers said they were stuck for more than three hours in the remote spot that falls under Siliguri’s Phansidewa block.

“The place has no habitation and there are no eateries or vendors in the area to get food or drinking water,” a passenger complained.

Gautam Deb, Bengal tourism minister and an MLA from the Siliguri area, visited the spot and questioned the railways’ maintenance.

“This is an unfortunate incident and the railways can’t shirk responsibility. So far, we have learnt that leakage in the oil reservoir of the engine caused the fire. Had it been maintained properly, such an incident could have been avoided,” the Trinamul leader said.

Rail traffic to north Bengal and the Northeast was affected for sometime. “The Dibrugarh-New Rajdhani Express, Kamakhya-Puri Express, Silchar-Trivandrum Express and the Kamakhya-Rajendranagar (Patna) Capital Express were diverted through Siliguri-Aluabari (an alternative route),” a rail official said.