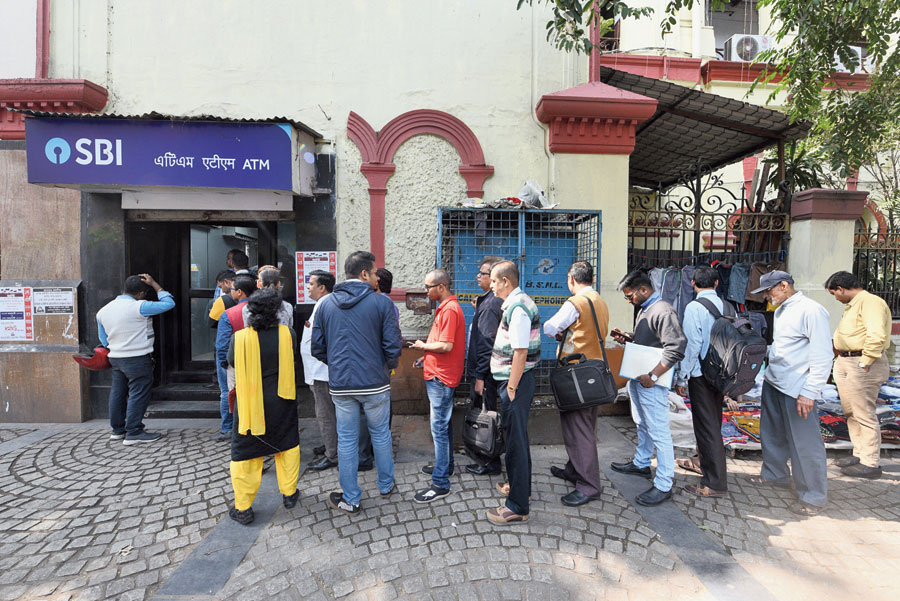 Around 90 per cent of the ATM kiosks in Bengal were shut on Friday, the first day of a two-day bank strike, leaving many people inconvenienced.

“According to our estimate, around 90 per cent of the ATMs were not in operation today on account of the strike. The situation will be similar tomorrow,” said Rajen Nagar, the president of the All India Bank Employees Association.

The United Forum of Bank Unions, an umbrella body of nine bank unions, decided to go on strike after talks on wage revision with the Indian Banks’ Association (IBA) failed. “Yesterday’s discussions with the IBA failed. There is a meeting with the Central Labour Commissioner in Delhi. Let’s see what happens,” Nagar said.

Pramit Mazumdar, a resident of Hatibagan, in north Calcutta, said all ATM kiosks near his house were closed on Friday. “I urgently needed cash to buy medicines. Not a single ATM was open in the vicinity. I have been told that they will be closed tomorrow, too. What is the need for a two-day strike?” Mazumdar said.

Bank branches were closed, too. Deposit and withdrawal of cash, issuing of bank drafts and loan disbursement have been put on hold. Internet banking and transactions using cards at merchant terminals were functional.

The strike coincides with the presentation of Union Budget 2020-21 on Saturday. With Sunday being a holiday for banks, normal services will be restored only after three days, on February 3.

“We anticipate a big rush at the ATMs on Sunday and the branches on Monday. We have urged the officers and employees not to inconvenience the customers, especially the salaried and the pensioners, as it will be the start of the month,” said an executive of a city-headquartered public sector bank.

“The strike has been totally successful so far,” said Sanjay Das, the general secretary of the Bengal unit of the All India Bank Officers’ Confederation.