State PWD to start installing the Bailey bridge from Monday 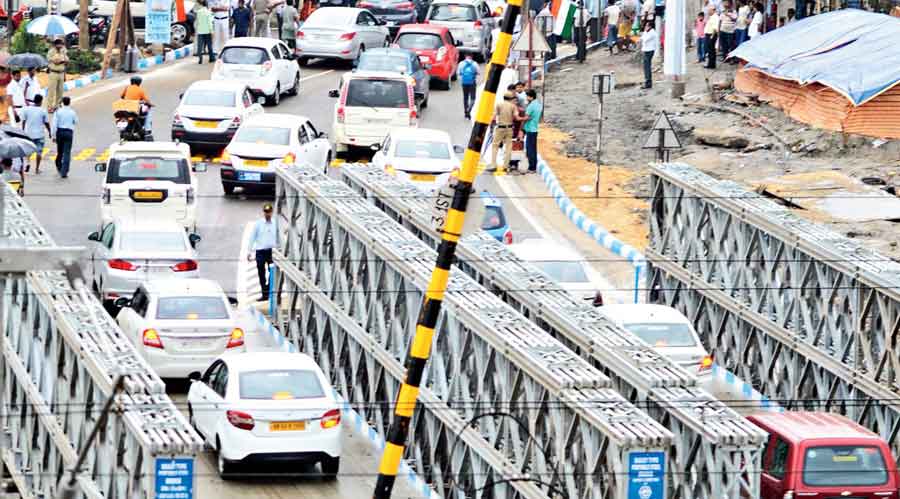 The state PWD (NH-IX division) will start installing the Bailey bridge over the damaged bridge on the Balason river on the northwest-end of Siliguri from Monday.

“Three trucks loaded with the iron structures of the bailey bridge that was installed at Majherhat, reached here on Saturday. We expect the rest of the structures to arrive here by Sunday. As of now, the plan is to start the installation process from Monday,” said an official of the state PWD (NH-IX division).

Iron components of the temporary bridge started reaching here in trucks from Calcutta on Saturday.

These components are of Majerhat in Calcutta, where the Bailey bridge was installed when a flyover collapsed at the site in 2018.

Since October 20, vehicular movement has been halted on the Balason river bridge as one of its pillars tilted and a portion of the concrete plank of the bridge sank to an extent.

Sources in the department said they have received clear instructions from the state government to work on a war footing to get the link functional, considering its vital location. The Balason bridge is along NH31, the principal highway that connects Siliguri, the hills, some other north Bengal districts and the northeast, to the rest of the country.

“We intend to finish the installation work by November 30. After that, trial runs would be held and the bridge inspected to confirm that it is ready for the traffic load. It seems the bridge will be ready for traffic from the first week of next month,” said a source.

Residents of Siliguri and surrounding areas continue to bear the brunt of traffic snarls as all vehicles are moving through Naukaghat More and a stretch of Asian Highway II in the southern end of the city.

With the Balason bridge out of bounds, traffic congestion has proved to be particularly severe in this festive season. Even on Saturday,  thousands came out to visit Kali Puja pandals.

“These days, it is taking over half-an-hour to cross a stretch of 2 to 3 kilometres through the busy thoroughfares of the city,” said Proloy Choudhury, a bank employee based in Siliguri.

He added: “There is an apprehension that traffic congestion will increase in the coming days as a number of schools will reopen from November 16. Hundreds of school buses are likely run across the city.”

In the course of the Kali Puja and Diwali celebrations, the Siliguri Metropolitan Police had to deploy additional forces in all important crossings to manage traffic. Even senior police officers were seen monitoring the traffic flow till late hours.

“We are monitoring the traffic through CCTV cameras as well and taking appropriate steps such as diverting vehicles to alternative routes to ensure that the flow is smooth,” said an officer.