The project is on the lines of the Dakshineswar skywalk 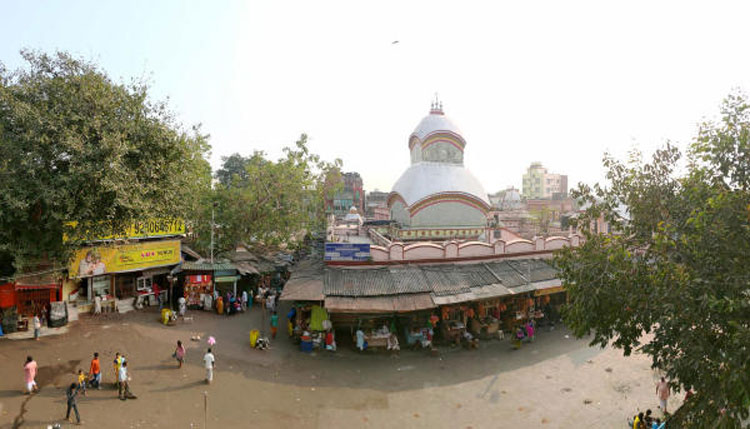 One arm of the 10.5m-wide skywalk will land near Kalighat police station for the convenience of devotees coming from Hazra Road.

A pre-bid meeting is scheduled for Saturday, when civic officials will interact with prospective bidders on the details of the project.

Chief minister Mamata Banerjee had proposed a skywalk in Kalighat last November, on the lines of the one at Dakshineswar.

Civic engineers carried out a preliminary study before entrusting the highway division of RITES with drawing up a detailed project report. The railway consultancy agency recently submitted the report .

The project would include a G+3 building near Kali Temple Road where hawkers, who at present occupy 180 shops in the hawkers’ market, would be shifted. The ground floor of the building will be used to set up a control room for the skywalk, equipped with firefighting facilities and details of the underground utilities.

Apart from the 180 stall owners in the hawkers’ market, Kali Temple Road is lined with hawkers’ stalls. “Unless some arrangement is made to accommodate them, it might be difficult to begin work on the project,” an officer of Kalighat police station said.

In contrast to the Dakshineswar skywalk, which has stalls in the middle, the CMC has not yet decided whether hawkers would be allowed inside the Kalighat skywalk.

A skywalk with four escalators and three elevators besides stairs will take pedestrians to Kalighat temple from the SP Mukherjee Road-Kali Temple Road crossing, a Calcutta Municipal Corporation project has envisioned.

The project is on the lines of the Dakshineswar skywalk, which was inaugurated on Kali Puja last year.

A detailed drawing and layout of the proposed skywalk at Kalighat have already been prepared by the Calcutta Municipal Corporation (CMC) and a tender floated for the project, which is estimated to cost around Rs 72 crore, sources said. This would include the cost of shifting of underground utilities.

Kalighat temple attracts nearly 30,000 visitors every day, according to a preliminary survey conducted by the civic body. Devotees have to make their way through the crowded Kali Temple Road, lined with hawkers, to reach the temple. The steady flow of vehicles and the swarm of hawkers add to the chaos.

The proposed skywalk will span about 430 metres, covering almost the entire stretch that visitors have to walk down at present, and land in front of a police kiosk on Ishwar Ganguly Street, around 100 metres from gate 1 of the main temple.

“The tender has been floated. The corporation has finalised the drawing. The agency that wins the contract will have to execute it within 18 months,” a civic engineer said.

The structure will stand six metres above the ground, mounted on steel-box portals extending across the width of Kali Temple Road. The steel-box portals will ensure that the underground sewerage network remains untouched. The base of the skywalk will be made of concrete and covered in vitrified tiles. It will have a cover of aluminium composite sheet overhead while the sides will be open to avert suffocation in case of a crowd swell.