The showers are going to continue over the next two days, the Met office said 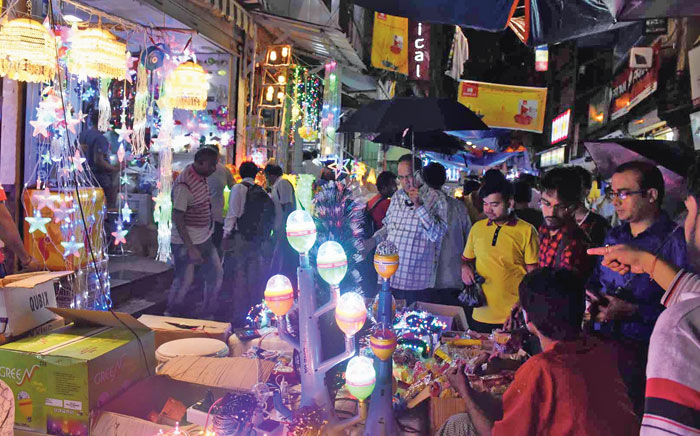 The city was caught in a persistent drizzle during the major part of Thursday with the intensity of the rain increasing late in the evening.

A low pressure that threatened to bring the downpour was moving at a slower pace than expected, said a Met official, not ruling out the possibility of intense rain continuing till Friday. The Met department, however, eyes better weather on Diwali.

The overcast sky and showers dragged the Celsius down seven notches to 25 degrees on Thursday.

“The well-marked low pressure area is located off the Andhra and Odisha coast. The system will eventually move upwards and head inland towards Jharkhand. It will continue infusing a lot of moisture into Bengal. There is chance of heavy rain till Friday morning,” said G.K. Das, director, IMD, Calcutta.

However, the Met office stuck to its forecast that the sky would clear from Saturday second half and Diwali on Sunday would see fine weather in Calcutta.

The persistent rain hampered business at Burrabazar and Chandni Chowk in the run-up to the festival of lights. The shops selling LED chains, fancy candles and lanterns, all of Chinese make, had to cover themselves in plastic sheets on Thursday evening.

The narrow alleys were full of slush.

The slump in the market had anyway hit business with the rain making things worse.

“I had stocked up 1,000 pieces of LED chains. I could not sell more than 350 over the past two days,” said a trader in Ezra Street.

Chandelier-themed lights with miniature bulbs inside, priced upwards of Rs 800, generated curiosity but most were left unsold, the traders said.

The chains — tiny lights strung with copper wires — were still the most popular pick. Priced at between Rs 60-200, the chains come in various sizes — the smallest being 32ft in length and holding together 60 lights. Some stalls are selling chains as long as 200ft.

The showers are going to continue over the next two days, the Met office said.

Parts of Birbhum, Bankura received over 60mm of rain since Wednesday night. Diamond Harbour in South 24 Parganas, a little over 50km from Calcutta, also received around 50mm.

In Calcutta, it drizzled through the night and Thursday. Later in the evening the intensity of rain increased in short spells. Dark clouds covered the sky since morning. Around 1.30pm, EM Bypass looked like it was evening. Almost every car, big or small, had their lights on.

Many schools closed for Diwali holidays after Thursday and children were seen both entering and leaving the schools in raincoats.

According to the weather-tracking website of the Calcutta Municipal Corporation, Behala received around 13mm till 7.30pm. Cossipore, New Market and Dhapa got around 11mm of rain.

The rain dragged the Celsius down. The maximum temperature, which had been above normal for the past few days, was 25 degrees on Thursday, seven notches below normal.

The low-pressure system has triggered incessant rain in Odisha, throwing life out of gear.

In view of the weather condition, the Odisha government has already asked the district administrations to remain prepared to deal with waterlogging.