The team had started the 'yatra' from Rajghat in New Delhi 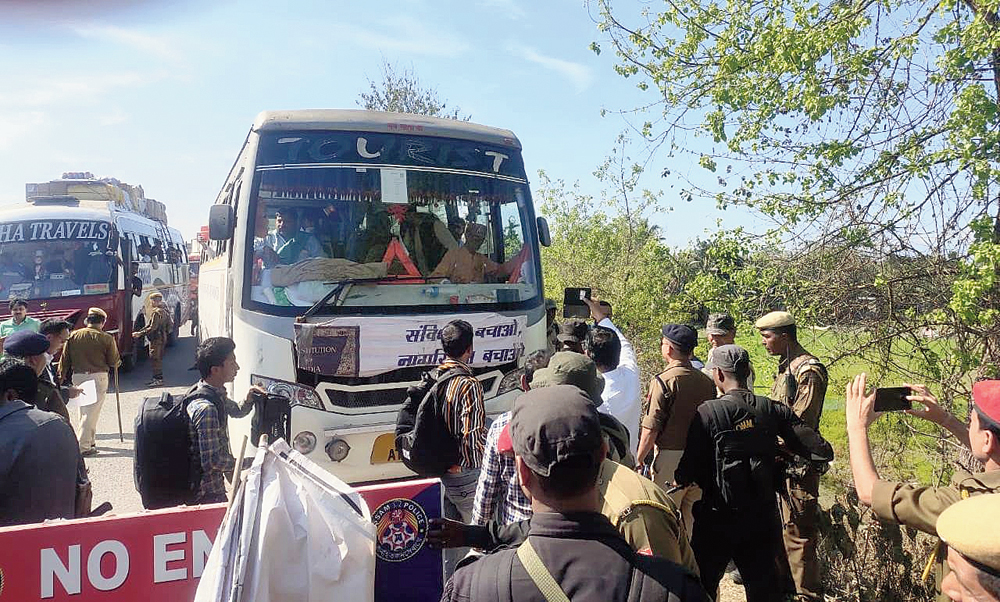 A team of 17 members from four rights groups who had embarked on a journey to form a human chain near a detention camp in Assam’s Goalpara district were stopped on the Bengal border on Friday by Assam police who said the trip was in violation of prohibitory orders.

The team had started the “yatra” from Rajghat in New Delhi to Goalpara in Assam. They were stopped at Simultapu in Srirampur, around 35km from Alipurduar town.

On February 22, the team comprising representatives of the Khuda-i-Khidmatgar, National Alliance for People’s Movements, Jamia Coordination Committee and the Socialist Party (India) had started from Delhi.

“We wanted to reach Matia in Goalpara district of Assam where a detention camp is coming up. There, we had planned to form a human chain to spread the message of unity, amity and peace. The yatra was organised because none other than the Prime Minister had recently said that there was no detention centre in India,” said Faisal Khan, who is associated with Khuda-i-Khidmatgar.

Sandeep Pandey, a Magsaysay award winner and a noted civil activist, was also in the team.

The team, sources said, entered Assam through NH31C via Barovisa in Alipurduar. They were travelling in a bus. As they reached Simultapu that is in Kokrajhar district around 1pm, local superintendent of police Rakesh Roushan stopped them.

“There are prohibitory orders in this area and that is why they were stopped. We can’t let them progress further,” the SP said.

Faisal said members of the Justice Forum, a social organisation in Assam, were not allowed to meet the team members. “We fail to understand why we were stopped,” said Faisal.

After being stopped, those in the delegation demonstrated and sang songs while trying to move past the police.

Kokrajhar SP Roushan said the 17 were released on bond and asked to leave for their homes.

The Jamia Coordination Committee has criticised the Assam police for stopping the team members..

“This is How a Peace Yatra in Assam is welcomed. Delhi to Detention Yatra is reaching Assam Border and this is the Number of Police Force welcoming them. Yes, this is New India, where u need permission to enter Assam (sic),” the committee tweeted.