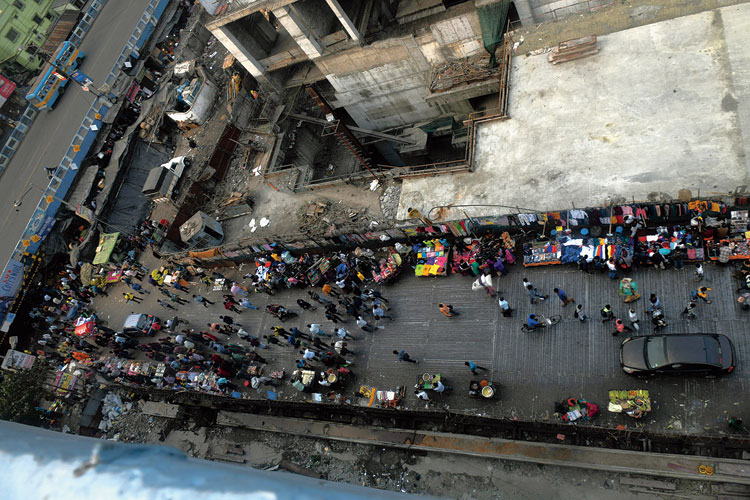 One of the pedestrian pathways near Sealdah station that the East-West authorities want to close for tunnel-boring work.
Picture by Bishwarup Dutta
Kinsuk Basu   |   Calcutta   |   Published 26.02.20, 08:54 PM

The East-West Metro authorities have requested police to close the two pedestrian pathways around Sealdah station for two years to facilitate the boring of a tunnel from Bowbazar to the station.

The tunnel-boring work had been stuck for almost six months since a large-scale subsidence on August 31.

Kolkata Metro Railway Corporation (KMRC), the implementing agency of the project that will connect Sector V with Howrah Maidan via a stretch under the Hooghly, has said alternative pathways would have to be created.

Police officers said they were planning the alternative pathways for pedestrians on their way to or from the station, which records around 30 lakh footfall every day.

KMRC has sought the closure of the two pathways from early March.

KMRC engineers and police officers have visited the site on Tuesday to understand the alignment of the movement of the tunnel-boring machine, which will move towards Sealdah from Bowbazar before taking a U-turn to head for Bowbazar again, a complex operation that would take at least a year.

The other machine has been lying defunct since it ran into a giant aquifer under Bowbazar on August 31, triggering subsidence that damaged many buildings.

“Steel decks were laid in the pathways around Sealdah station. Pedestrians have been moving over these decks. We need to remove them now for the tunnel-boring work,” said a KMRC engineer.

Passengers headed for the station or coming out of it take a stretch that moves adjacent to Sealdah court towards Koley Market below the Sealdah flyover.