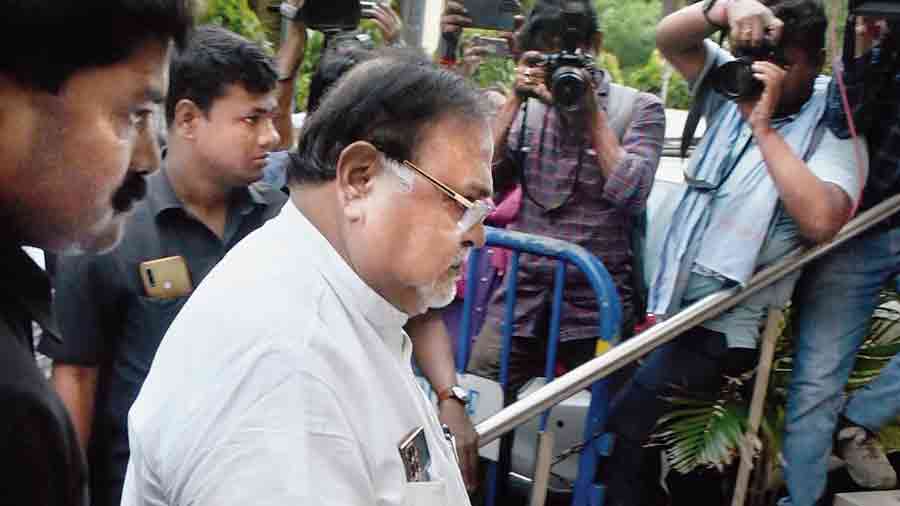 The agency also issued summons to Manik Bhattacharya, TMC MLA and former president of the West Bengal Board of Secondary Education (WBBSE), for questioning in connection with the alleged irregularities.

Chatterjee, who was brought back to Kolkata at 6.30 AM after a thorough check-up at AIIMS Bhubaneswar, was straightaway taken to the ED office at the CGO complex here, where he was questioned.

Amid growing opposition demands for the industry minister's removal from the state cabinet, Chatterjee's official car, used by him for over 15 years, was on Tuesday deposited in the West Bengal Assembly.

Speaker Biman Banerjee confirmed that his car, allotted to him by the Assembly as the leader of the opposition in 2006, was deposited, but said that the development does not "imply anything".

The Speaker also demanded a time-bound probe into the scam and hoped that the truth would be out soon.

Banerjee also stated that the arrest of Chatterjee, who also holds the portfolio of parliamentary affairs, will not adversely impact the related department of the state assembly.

A special ED court on Monday remanded both Chatterjee and Mukherjee to ED custody till August 3 on a prayer by the central agency for questioning them to unearth the alleged money trail involved in the teacher recruitment scam.

While Chatterjee was produced before the special court through the virtual mode as per a Calcutta High Court order, Mukherjee, from whose house crores of rupees was allegedly found during a raid by the ED, was physically produced before it.

The high court had on Sunday directed that Chatterjee be taken to AIIMS, Bhubaneswar, for a medical check-up by specialists of various departments on Monday.

The ED challenged a Chief Metropolitan Magistrate (in-charge) court's order sending Chatterjee to state-run SSKM Hospital after his lawyers claimed he was ill. The agency asserted that the court cannot specify a medical facility.

Doctors at the premier medical establishment in Bhubaneswar said Chatterjee was suffering from chronic diseases but did not need immediate hospitalisation.

Meanwhile, ED issued summons to Bhattacharya, a TMC MLA from Palashipara Assembly constituency in Nadia district and a former president of WBBSE, asking him to depose before officials of the agency at the CGO Complex on Wednesday, sources said.

Meanwhile, in a significant development, TMC mouthpiece "Jago Bangla" (Wake up, Bengal) has stopped naming Chatterjee either as a minister or the party's secretary general.

In news reports about his ED custody, neither his designation as a minister nor as a party leader was mentioned.

However, Chatterjee's name is still there in the printer's line as editor of "Jago Bangla".

In a letter written to Banerjee, Chowdhury claimed that "irregularities" in the recruitment process by the School Service Commission (SSC) are an "open secret".

On Monday, TMC supremo and Chief Minister Mamata Banerjee said that if anyone is found guilty of wrongdoing, he must be punished and asserted that she does not support corruption.

The ED arrested Chatterjee on Saturday in connection with its investigation into irregularities in the recruitment drives by the School Service Commission (SSC).