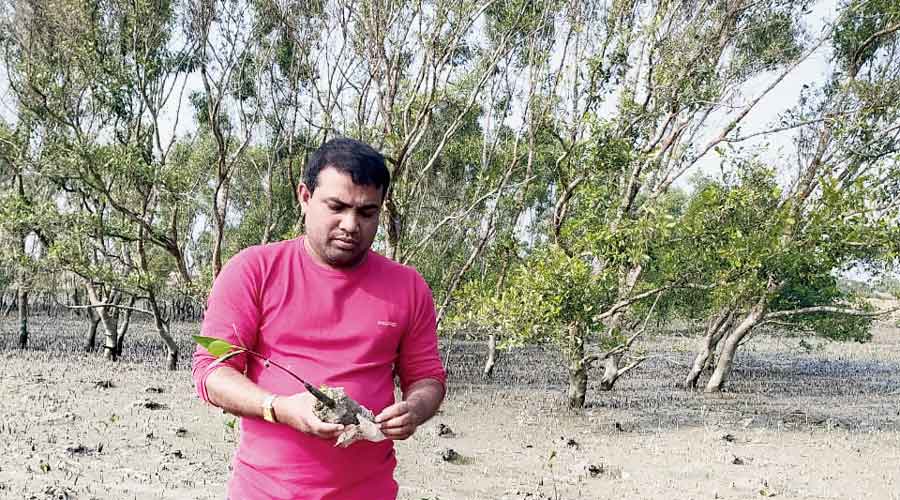 Umashankar Mondal, 40, had earned the moniker of “mangrove man” among residents of the Sunderbans a long time ago for his unrelenting seedling planting work towards the sustenance and rejuvenation of the mangroves.

Mondal was chosen for the World Wildlife Fund’s Dr Rimington Award this year for his efforts aiding the world’s largest tiger reserve.

The award has been presented by the WWF since 2018 to recognise outstanding contributors to the conservation of tigers. “It is a very prestigious award and we are really proud of Umashankar. Such recognition will help encourage others to come forward to preserve tigers in the Sundarbans,” said Anamitra Anurag Danda, the director of the WWF’s Sunderban Reserve.

Umashankar, who is a resident of Chargheri village of Satjelia island of South 24-Parganas’ Gosaba, is a geography teacher at a Murshidabad high school.

After witnessing Cyclone Aila in 2009, he took the initiative to plant mangroves and has planted over 6.5 lakh saplings with the help of 135 associates on the embankments of the rivers of two islands, Gosaba and Satjelia. Local residents say they have grown to consider the tree cover as a “shield” for their lives that was affirmed during Cyclone Amphan last year and Cyclone Yaas this year.

The Telegraph had reported on Mandal in 2009 when he had started planting mangroves. plant. Mandal said: “I have no words to thank the WWF, who searched out and recognised my contribution. I never thought that my work would be appreciated by a global platform. It puts more responsibility on me. I thank those people who helped me plant so many mangroves in this 12-year-long drive.”