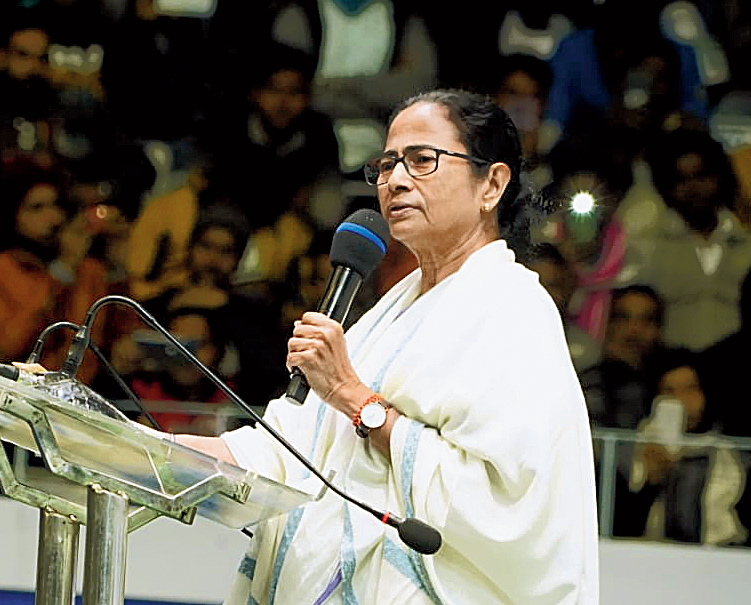 Author Mamata Banerjee said on Monday that her target was to write and publish 100 books as she is set to cross the 90-mark at this year’s Calcutta Book Fair.

She was addressing a gathering of the Trinamul Congress’s student and youth wing activists at the Netaji Indoor Stadium here when she brought up her fondness for writing.

Besides several other titles, the Trinamul Congress chief said she would publish a collection of her poetry comprising 946 poems.

Mamata’s brush with books began with the penning of Upolobdhi in 1995. Twenty-five years later, according to sources in her party, it has remained one of her bestsellers. In the 2011 book fair, months before she would oust the Left Front and take over as chief minister, the proceeds from the sale of her books crossed Rs 10 lakh. As her popularity soared, so did the sale of her books. In 2012, Mamata mapped her rise from a grassroots political worker to the seat of the chief minister of Bengal in Poriborton, an instant hit.

At the event, Mamata also urged the young activists to draw inspiration from iconic anti-apartheid revolutionary Nelson Mandela, urging them not to let their resistance against the BJP’s citizenship thrusts flag.

“Every student must try to visit a thousand houses…. Remember Mandela. He is our inspiration in this fight against racism, against communalism,” she said.

She also said her party’s labour arm would start a three-day programme against the privatisation of Air India from Tuesday.