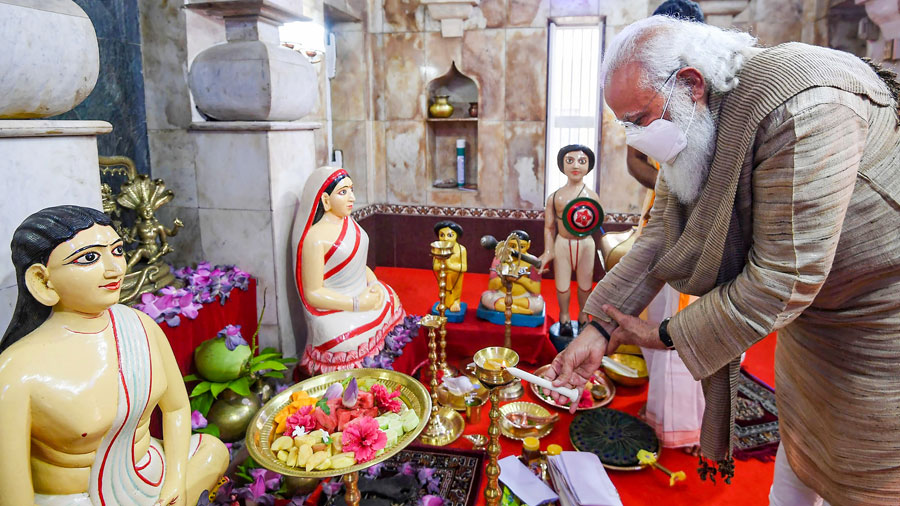 Bengal Chief Minister Mamata Banerjee on Saturday hit out at Prime Minister Narendra Modi for his visit to Bangladesh, accusing him of trying to influence voters in Bengal where polling began for the eight-phase assembly election in the morning, according to NDTV.com.

The CM was referring to the PM offering prayers at a temple in Bangladesh's Orakandi, the birthplace of Hindu mystic figure and Matua community's spiritual guru Harichand Thakur, earlier in the day.

Orakandi is the abode of hundreds from the Hindu Matua community, a large number of whom are now residents of Bengal and an important factor in elections.

PM Modi, whose visit during the temple was seen by many as a political message, also addressed the members of Matua community, saying, "I was speaking to some people here. They were saying who could have thought that India's Prime Minister would visit Orakandi."

He also promised to make it easier for people from India to Orakandi and announced that his government will upgrade a girls' school and set up a primary school in the area.

"Elections are underway here and he (PM) goes to Bangladesh and lectures on Bengal. It is a total violation of code of conduct of the election," Banerjee said at a campaign event in Kharagpur according to news agency ANI.

"In 2019 Lok Sabha polls, when a Bangladeshi actor attended our rally, BJP spoke to Bangladesh government and cancelled his visa. When polls are underway here, you (PM) go to Bangladesh to seek votes from one section of people. Why shouldn't your visa be cancelled? We will complain to the Election Commission," NDTV.com quoted the Chief Minister as saying.

Not taking too kindly to the canvassing across the border, NDTV.com quoted Banerjee saying, "Sometimes they say Mamata has brought people from Bangladesh and did infiltration. But he (PM) himself goes to Bangladesh for vote marketing."

Bengal is holding elections in a record eight phases starting Saturday in a contest that has seen the BJP pull out all stops, including poaching a large number of Trinamool leaders, to unseat the two-time Chief Minister.

Results are set to be declared on May 2.