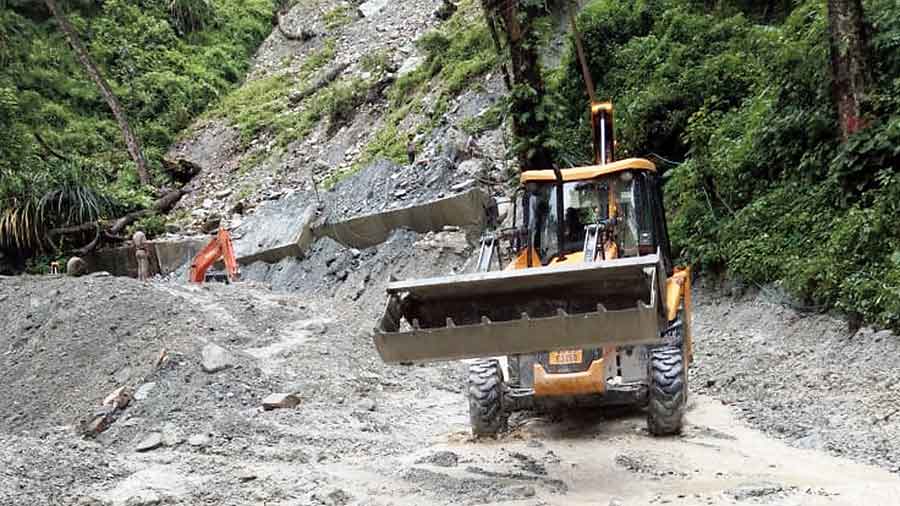 Traffic on NH10 that connects Sikkim and Kalimpong with the rest of the country was disrupted for around 14 hours on Thursday because of a landslide which brought debris and boulders on the road at 29th Mile. Heavy rain triggered landslides elsewhere in the Darjeeling hills also.

The downpour led to the swelling of the Mahananda and some rivulets flowing through Siliguri and the suburbs.

The landslide at 29th Mile occurred around 2am. Traffic came to a halt and four excavators were engaged to clear the debris from the highway. Around 4pm, vehicles were allowed to move in a single file. This is the third landslide to occur on NH10 in the past 10 days.

“Rubble and boulders fell on the highway because of heavy rains. Initially, we managed to open the road for traffic around 6am. But just after an hour, more debris came down and the road was blocked again. One-way traffic was restored in the evening,” said Subodh Chhetri, the executive engineer of the public works department (NH IX division).

A source in the disaster management section of the Darjeeling district administration said houses had been damaged in landslides at Bara Sittong, Bimiray Taar, St Mary’s, Selim Hill tea estate and at Tindharia tea estate in Kurseong.

Homes were also damaged at Phuguri and Lepcha Hill of Mirik block as debris came down from the hills.

Sources in the PWD said they were apprehensive of more landslides as the Met Office had forecast heavy showers in the next couple of days.

Sources said it had rained around 196mm in Siliguri in a 24-hour period till 8.30am on Thursday. Kalimpong, Kurseong, Darjeeling and Mirik received showers of around 70mm, 62m, 50mm and 40mm, respectively.

Gautam Deb, the chairperson of the board of administrators at the Siliguri Municipal Corporation, held a meeting and said three control rooms would be set up to keep a tab on the situation.

The Malda division of the Eastern Railway cancelled as many as 13 local trains and diverted 16 long-distance trains.

Most of the trains bound for Bihar and Jharkhand or those which run through those states have either been cancelled or diverted.

“Train services along the Calcutta-Malda-NJP route have not been affected but at some places, the Ganga has spilled over its banks and is flowing under culverts which are along the tracks. As the water is flowing in full force, it has been decided to divert and cancel some trains,” said an official.

Bodies of all three brothers, who had gone missing when their boat had capsized on the Ganga on Wednesday, were fished out on Thursday afternoon.

Subrata Mandal, 22, Satyajit, 19, and Satyaban, 17, had drowned in the river at Krishnapur in Kaliachak 3 block, after which the state civil defence department and the NDRF launched an extensive search.