In her tribute, Didi says Lata Mangeshkar was a living history 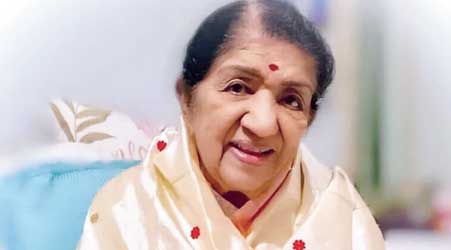 Chief minister Mamata Banerjee, whose government announced a half-holiday in the state on Monday to honour the legacy of Lata Mangeshkar, mourned the legendary singer’s demise and reminisced their cordial ties.

Mamata recalled she had received the congratulatory gift of a gold pendant in the form of the face of Kali (the Trinamul Congress chief is a devotee of goddess Kali) from Mangeshkar after her historic victory in 2011. “Her gift of that gold locket, a small face of Ma Kali, I did not lose it. I treasure it… although I don’t use these things (jewellery). I sent her something too, in return…. We spoke many times over the phone then,” said Mamata to ABP Ananda.

“We lost our legend, she was living history…. The empress of music, for nearly eight decades she mesmerised audiences,” said the chief minister, adding that Mangeshkar songs would be played at public places and traffic signals in the state over the next 15 days.

Earlier in the day, she said on Twitter: “I pay my heart-felt tribute to the departed icon of India, Bharatratna Lata Mangeshkar. While offering my sincerest condolences to her family and the billions of admirers that she leaves behind all over the world, I express my deepest sadness at the demise of the genius that the Nightingale of India truly was.”

“Like all her fans and followers across the planet, I was also mesmerized by her voice and renderings, and felt grateful that she held Bengal and the artistes of the East so dear to her heart and so integral to her magnificent world of music,” she added.

Bengal finance secretary Manoj Pant issued an order, announcing a half-holiday “as a mark of respect to the departed icon”.

“State government offices, urban and rural local bodies, corporations, undertakings, educational institutions and other offices/institutions under the control of the government of West Bengal shall be closed in the 2nd half of February 7, 2022,” wrote Pant.

To ABP Ananda, Mamata said: “She sang countless songs in Bengali, for which we remain ever grateful. She had so many iconic collaborations with stalwarts from Bengal…. She was very much a part of the golden age of Bengali cinema too.”

“Her first ever Bengali song, Akash Prodeep Joley… I often play on the synthesiser,” Mamata added.

She went on to recall the purported January 1963 incident of Jawaharlal Nehru telling Mangeshkar that her rendition of Ae Mere Watan Ke Logon had moved him to tears.

She also recalled her plan to personally hand over the Banga Bibhushan award to Mangeshkar had to be cancelled at the last minute because of the singer’s illness.

“A few years ago, we had spoken over the phone… we had discussed, through (industrialist) Sanjiv Goenka — because of their closeness over her association with His Master’s Voice — the possibility of bringing her here for a grand reception… We had also wanted to personally hand over Bengal’s greatest honour, the Banga Bibhushan to her,” said Mamata.