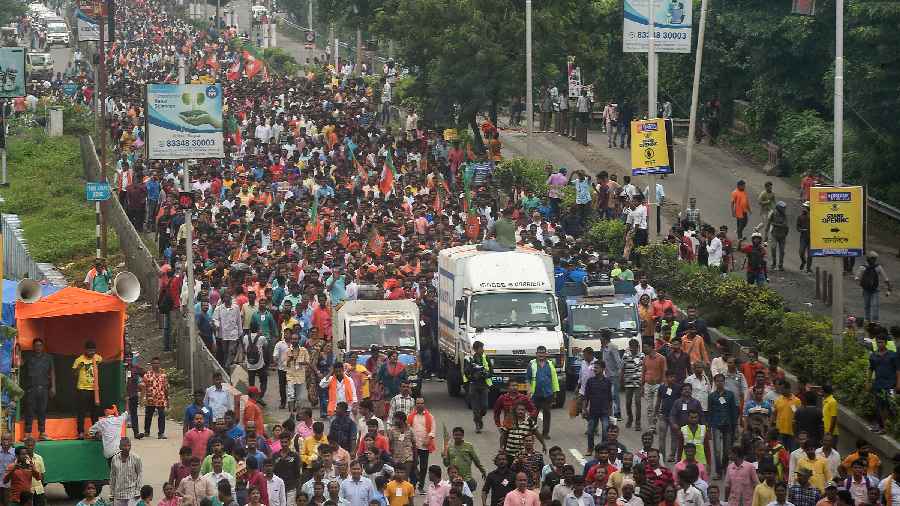 The Calcutta High Court on Tuesday sought a report from the West Bengal Home Secretary over the allegation that BJP supporters were forcibly prevented from attending its 'march to Nabanna' programme.

The bench directed the state authorities to ensure that no unnecessary arrest is made and no person is unnecessarily detained in connection with the rally.

The court directed the state Home Secretary to submit a report by September 19 over the allegations made by the BJP that its supporters were forcibly prevented from attending the rally.

The bench observed that peace and tranquility is required to be maintained.

The petitioner in his PIL claimed that BJP workers were forcibly prevented from attending Tuesday's rally and party leaders were attacked.

It was claimed that BJP workers were restrained from boarding trains and vehicles were stopped enroute to Kolkata and Howrah for attending the rally.

It was also alleged that party workers were attacked and prevented from entering or leaving the BJP state headquarters at Muralidhar Sen Lane here.

Petitioner's lawyer Subir Sanyal claimed that Leader of Opposition Suvendu Adhikari was arrested despite an earlier single bench order of the high court, which protected him from such action against him.

Advocate General SN Mookherjee claimed that section 144 imposed in the metropolitan area of Howrah was in force and that permission for the rally was not granted.

It was alleged that violent activities were resorted to by some participating in the rally.

He submitted that the order of single bench on protection to Adhikari was in respect of cases mentioned in it.

Mookherjee stated before the court that the leaders who were arrested during the protests were soon to be released on personal bond.

Adhikari, BJP MP Locket Chatterjee and other leaders were released on personal bond from Lalbazar, the Calcutta Police headquarters, in the evening.

Parts of Kolkata and Howrah district turned into battlefields as BJP supporters clashed with the police while trying to get past barricades during their march to West Bengal secretariat 'Nabanna'.