The 3 demands are a clear indication that the forum is trying to bring together tribals, non-tribals, and SC community on a single platform 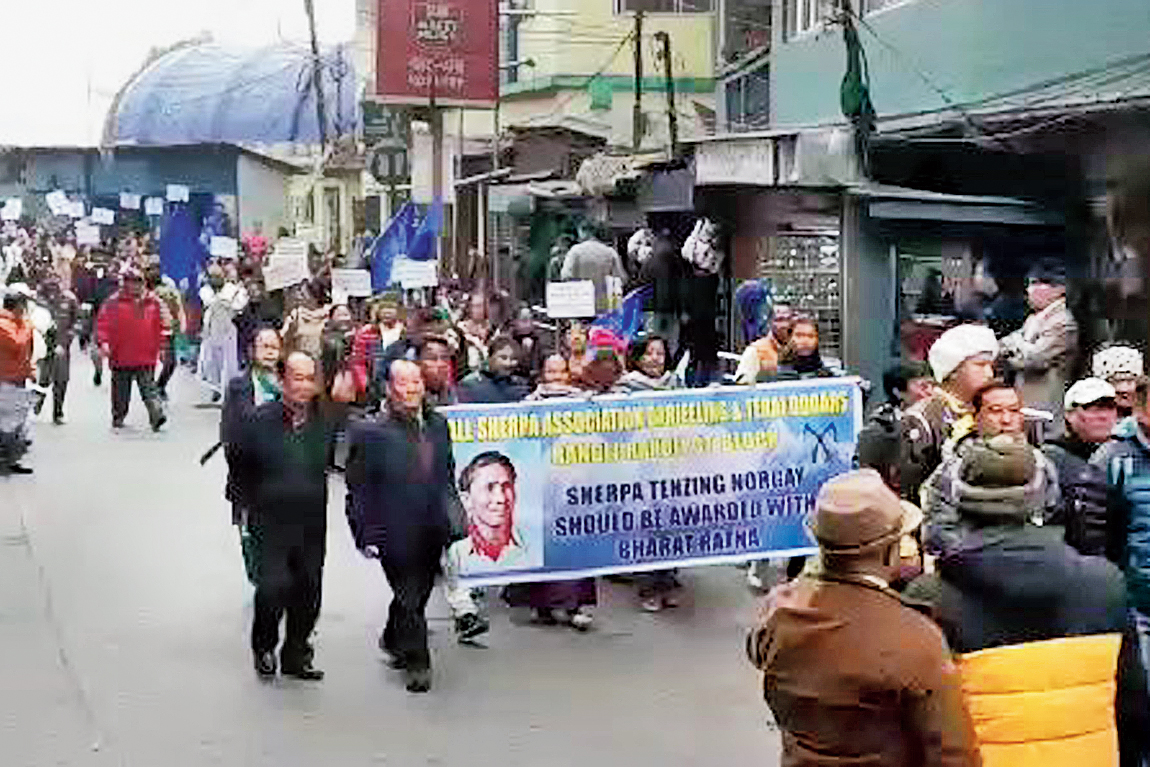 The procession by the United Gorkha Community Forum in Darjeeling on Sunday
(Picture sourced by The Telegraph)
Vivek Chhetri   |   Darjeeling   |   Published 01.12.19, 08:40 PM

An apolitical organisation of Gorkhas organised a procession here on Sunday to demand Scheduled Tribe status for 11 hill communities, Bharat Ratna for Tenzing Norgay Sherpa and implementation of reservation in jobs at the GTA.

Around 45km away in Kalimpong, another march was brought out by the Lepcha community to support chief minister Mamata Banerjee’s vow to stall the National Register of Citizens in Bengal.

The “peace rally” in Darjeeling was brought out by the United Gorkha Community Forum, which draws members from 21 hill communities.

B. Pradhan, the president of the forum, said: “The peace rally was organised in Darjeeling to raise three key issues. Our forum is apolitical and encompasses 21 hill communities.”

The three demands are granting of tribal status to 11 hill communities — Bhujel, Gurung, Mangar, Newar, Jogi, Khas, Rai, Sunuwar, Thami, Yakka (Dewan) and Dhimal, conferment of Bharat Ratna on Tenzing Norgay Sherpa, the first man to climb Mt Everest, along with Sir Edmund Hillary, and implementation of roster system and other reservations entitled to the Schedule Caste community in the Gorkhaland Territorial Administration.

Although the Centre had constituted three committees to look into the demand for the tribal status for the 11 communities, not much headway has been made.

A recent application by Bishal Rai, a resident of Teesta, under the Right to Information Act suggested that the last committee headed by M.R. Tshering, joint secretary, ministry of tribal affairs, too, had not passed any concrete observation on the demand and instead referred certain issues to the Officer of Registrar General of India.

The demand for Bharat Ratna to Tenzing Norgay is being raised since 2012 after the Centre decided to consider sportspersons for the country’s top civilian award.

The SC community’s demand for proper reservation in the hill bodies (including the erstwhile Darjeeling Gorkha Hill Council) is more than a decade old.

Observers said the forum’s rally on the three demands might be part of an attempt to bring about unity among the hill people.

“The three demands are a clear indication that the forum is trying to bring together tribals, non-tribals, and SC community on a single platform,” said an observer.

The rally started from near railway station and ended at Chowrasta.

The forum said there was a plan to start a signature campaign also on the three demands.

In Kalimpong, the anti-NRC rally, largely organised by the Lepcha community, saw the participation of some representatives of the Muslim community and a section of Newar and Bhutia communities.

The procession started from Town Hall and ended at the Mela Ground.

The rallyists raised slogan against the NRC and in support of Mamata Banerjee.

Bengal panchayat minister and senior Trinamul leader Subrata Mukherjee on Sunday said rural elections couldn’t be held in the Darjeeling hills since 2000 because of rapid changes in the political situation in the region.

Mukherjee, who was in the Matialli block of Jalpaiguri to inaugurate a drinking water project, said the state government would take initiatives to hold the rural polls soon.