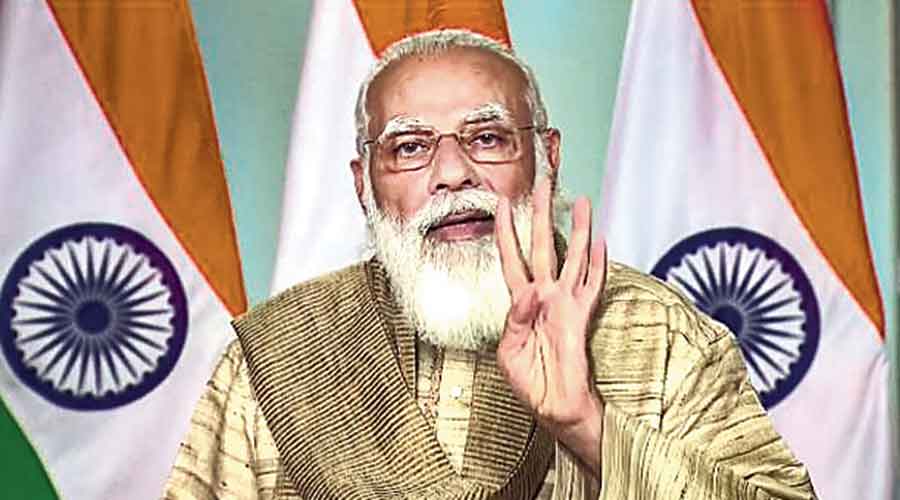 Prime Minister Narendra Modi on Thursday invoked Bengal’s icons, tried speaking the “sweet language”, spoke of the “sonar Bangla” dream and rolled out a long list of what the BJP-led Centre had done for the state in his 25-minute address from Delhi live-streamed across Bengal.

“I feel like I’m in Calcutta among you and not in Delhi,” he said in his speech that was part of an inaugural event of a Durga Puja hosted by the Bengal unit of the BJP in Salt Lake.

Billed as a message to the people of Bengal for Durga Puja, the contents of Modi’s speech made it clear that he was trying to woo voters in poll-bound Bengal though he steered clear of any reference to elections or Trinamul.

The virtual event started with BJP MP Babul Supriyo singing a Tagore song in the presence of senior state BJP leaders, and Modi taking it up from there.

Modi listed Bengal’s notables — Sri Ramakrishna, Swami Vivekananda, Rabindranath Tagore, Syamaprasad Mookerjee, Baba Lokenath, Thakur Anukulchandra, Kazi Nazrul Islam, Satyajit Ray, Uttam Kumar  — and juxtaposed his government’s commitment to adhere to the path shown by some of the state’s luminaries. He included Panchanan Barma, a 19th century Rajbanshi reformer, and Harichand and Guruchand Thakur, founders of the Matua sect, in the list. “If I continue to take the names of such Bengalis, the day will end but we won’t run out of names,” Modi said. “Whenever the need was felt in India’s history, Bengal has always led the way...”

Linking the  autumn festival with woman empowerment, he went on to say what his government had done for women, including Jan Dhan accounts for 22 crore women, Beti Bachao, Beti Padhao scheme, among others. Modi referred to Ujjwala Yojana and Jal Jeevan Mission, which he claimed helped thousands of Bengal households. “Our government sanctioned Rs 8,500 crore for the East-West Metro corridor in Calcutta,” he said. “Besides, crores of rupees have been invested to build better roads among India, Nepal and Bangladesh,” he added.

He also reminded people to be cautious during the festive season so that the pandemic situation did not worsen. “I urge everyone to ensure (social) distancing and wear masks during celebrations at all times,” said Modi.