Renu Khatun, 23, was in her sleep and Sariful Sheikh alias Sher Mohammed, along with his two friends, used a machete to cut her wrist 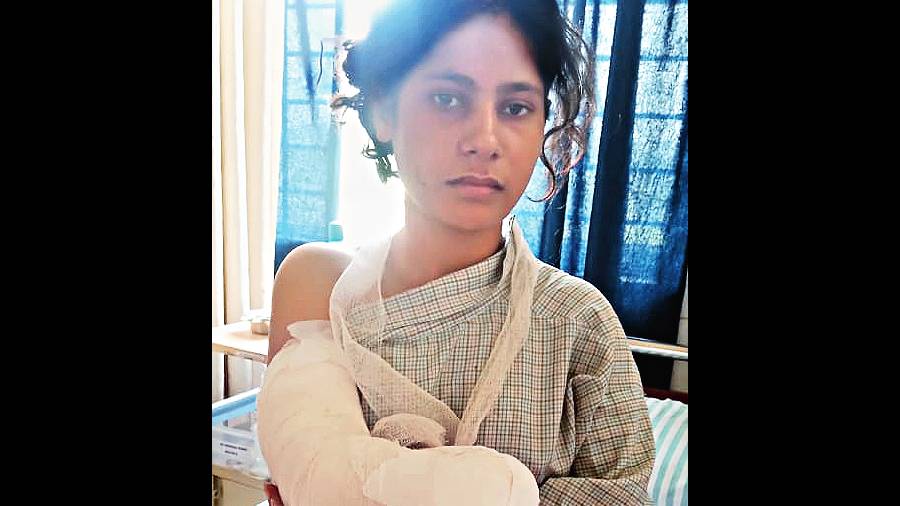 A 26-year-old man from Ketugram in East Burdwan allegedly chopped off the right hand of his wife, from wrist upwards, in an apparent attempt to prevent her from taking up the job of a nurse at a government hospital.

The incident took place early on Sunday morning when Renu Khatun, 23, was in her sleep and Sariful Sheikh alias Sher Mohammed, along with his two friends, used a machete to chop off her hand.

Police sources said Renu, who was rushed to a private hospital in Durgapur after two government hospitals referred her to Calcutta, was stable, but critical.

The police have started a probe on the basis of a complaint from Azizul Haque, father of the girl.

“We have received a complaint from the father of the woman and started a case of attempt to murder... All the accused, including the husband of the woman and his friends, are absconding. Raids are on to arrest them,” said Dhruba Das, an additional superintendent of police in East Burdwan’s Katwa.

Renu, from Chinispur of Ketugram from her childhood, completed her diploma course in General Nursing and Midwifery (GNM) from RG Kar Medical College and Hospital in Calcutta in 2018. After that, she began working in a private hospital in Durgapur as a nurse to gather experience amid objections from her husband and in-laws.

The police have learnt that her husband, who used to run a small grocery store of his father, and the in-laws were opposed to Renu’s decision of working and she was subjected to torture.

“She got married in 2017 and life has been difficult for her at her in-laws’ place from the very beginning.... The torture increased manifold when Renu informed her husband recently that she has got a government job as a nurse and she can be posted in anywhere across the state as per the job condition,” said Ripon Sheikh, elder brother of Renu.

“They had clearly said that she would not be allowed to work but my sister was adamant on joining the service...,” added Ripon, a diploma engineer, who failed to appear for an Indian Postal Department exam on Sunday because of the tragedy in the family.

Ripon and his family have informed the police that Renu, who was also pursuing her graduation in Sanskrit from a college in Ketugram, told them at the hospital that while she was writhing in pain, her husband told her that he took the step to ensure that she could never take up the government job.

The police have also learnt that her husband had hidden the severed portion of the hand in a bag to rule out the possibility of the wrist getting fixed with the arm through an operation.

“My sister’s right hand could have been saved had we found the severed portion on time... We searched the home, but didn’t get it. Later, some neighbours found it hidden in a bag, but it was too late,” said Ripon.