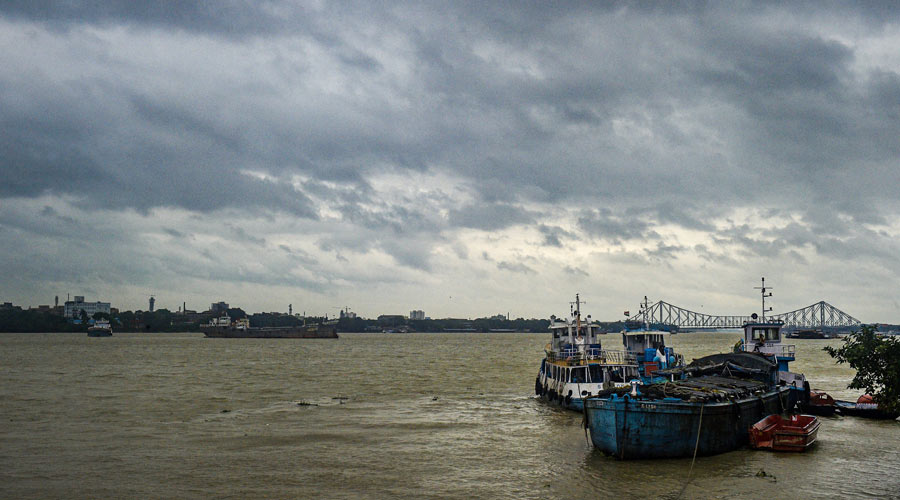 Vessels are seen anchored in the Ganga river as dark clouds hover over, during the monsoon season in Calcutta on Friday
PTI Photo
Our Web Desk   |   Calcutta   |   Published 19.08.22, 05:18 PM

The depression in the Bay of Bengal that was expected to aggravate into a deep depression is now a Tropical Cyclone according to the Joint Typhoon Warning Center, say media reports.

The storm is hovering about 200 km southeast of Calcutta in the North Bay of Bengal.

As per reports, it is heading west northwestwards and is likely to cross coast anytime late evening between Balasore and Sagar Islands in the form of a tropical storm. The entire process will escalate in the next few hours at least.

After the landfall, the system will slow down but can hold on to the status of a Tropical Storm for the next 6-8 hours following which it will weaken into a deep depression then move towards Jharkhand and North Chhattisgarh.

The conditions in Calcutta started changing late Thursday evening. It started raining in some pockets a little after 8pm.

“The system is tipped to intensify into a depression by Friday. Kolkata and coastal parts of south Bengal are likely to get heavy rain between Thursday night and Friday night. The weather in Kolkata will improve from Saturday as the system moves towards Odisha, Jharkhand and Chhattisgarh,” GK Das, director, IMD, Calcutta had said.

Gusty winds would fly over West Bengal Coast and adjoining Odisha giving heavy rains to parts of East India, which have been waiting for some rains.

The weather will be stormy in West Bengal, Jharkhand, Odisha and Chhattisgarh in the next 24 hours.

It is a very unusual thing, normally in monsoon months, it is not common to have a Cyclonic Storm and that too storm is positioned a little north to the usual position. Storms go to Odisha while this one will be tracking west-northwestward and affect more of West Bengal region.