Decision to curtail campaign time made by Modi-Shah, not Election Commission: Mamata 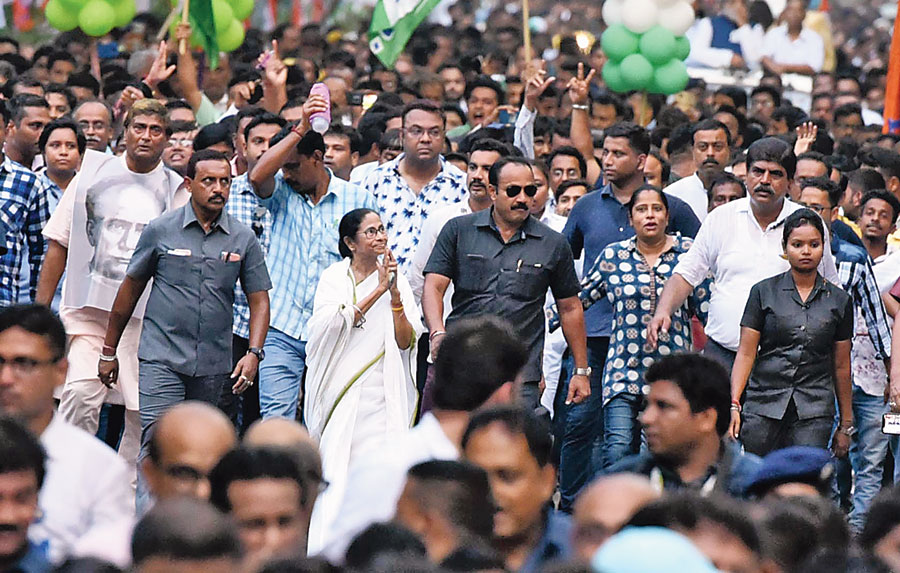 For the first time in India, the Election Commission has curtailed the campaign time for the nine Bengal seats that vote on Sunday, citing violence, including the flare-up during BJP chief Amit Shah’s road show that culminated in the destruction of a bust of Ishwarchandra Vidyasagar.

Normally, campaigning would have continued up to Friday 5pm, that is, till 48 hours before the end of polling.

But the 19-hour reduction does not stand in the way of Prime Minister Narendra Modi’s last rallies in Bengal in this election. He is scheduled to address meetings on Thursday in Dum Dum and Lakshmikantapur that falls in the Diamond Harbour seat.

Many wondered why the campaign curfew did not kick in from Wednesday night itself if the law and order situation was so bad. Some parties openly alleged that the window was offered to favour Modi.

A senior Election Commission source said the panel was not aware of the campaign schedules of the Prime Minister or other leaders, and that all parties have an equal opportunity to campaign on Thursday. The source added that the 10pm cut-off was in adherence to bans by several high courts against the use of loudspeakers after that time.

The unparalleled pruning of the campaign window came hours after the Union home ministry took the rare step of writing to the poll panel expressing concern at the electoral violence in Bengal, and Shah accused the commission of ignoring the “violence and rigging” in the state.

A ministry official said the letter was a rare move, for it is political parties that usually air such concerns to the poll watchdog.

“The letter is about the poll violence in Bengal during the previous six phases,” another official said.

Chief minister Mamata Banerjee said the poll panel had lost its “credibility” and urged all parties, including BJP allies, to protest the reduction of the campaign time. “But these are not EC decisions, these are Modi-Shah’s decisions,” she said.

“Today is a dark day in the history of democracy,” the Congress said.

BJP leader and finance minister Arun Jaitley defended the Election Commission order, saying it shows there is a classical case of breakdown of the constitutional machinery in Bengal.

CID additional director-general Kumar, a confidant of Mamata, has been asked to report to the Union home ministry by 10am on Thursday. No explanation has been provided, and the officials who read out the order did not take questions.

Bhattacharya has been removed as principal secretary (home and hill affairs) for writing a letter to the state chief electoral officer, which the commission has construed as interference in the poll process. His responsibilities have been handed over to the chief secretary.

“This is for the first time such a measure has been taken using the EC’s constitutional powers. But this is not going to be the last,” deputy election commissioner Chandra Bhushan Kumar said in New Delhi, referring to the curtailment of the campaign period.

The six-page order shortening the campaign time cited a report by election observers about “resistance and non-cooperation” from the district administrations and police in the matters of providing a level playing field to candidates and a threat-free environment to voters.

Quoting from the report, the commission flagged “the fear psychosis that is widely prevalent”. It said the observers had underlined that the “utterances of AITC (Trinamul) senior leaders on the lines of ‘central forces will leave after the elections while we will remain’ send a chilling message among the officers as well as voters”.

Trying to pre-empt any legal challenge, the order cited a constitution bench ruling (ECI vs State of Haryana). It quoted the ruling as saying “the presumption of the ECI as regards law and order situation in the areas going to poll should prevail over that of state government and that even the high court should not substitute its knowledge and opinion in such matters’’.

Shah too had flagged the observers’ report in the morning while asking why those with criminal records had not been rounded up in Bengal. “I have the observers’ report that (says that) till these goondas are taken into custody, the polls cannot be conducted properly. Still, the ECI has not done anything,” he said.

Accusing the commission of inaction in Bengal, he added: “From day one, the Election Commission has been biased with regard to Bengal. EC has a different yardstick for Bengal.”

“West Bengal Govt is misusing the state machinery to stifle democratic rights of the people. These attempts at intimidating the leaders and workers of a political party will fail miserably.

Rajnath said the FIR against Shah for Tuesday’s violence was a “mockery of democracy and due process”.

Police sources in Calcutta said that till Wednesday evening, the FIR (first information report) did not mention Shah by name. Sources in the police said the FIR refers to some “BJP supporters and leaders”.

A letter of complaint filed by a student of Vidyasagar College in north Calcutta, which was vandalised by suspected BJP supporters, had named Shah. A complaint letter is not an FIR, the sources pointed out. An FIR is drawn up by the police on the basis of a complaint.

EC has lost all credibility: Mamata