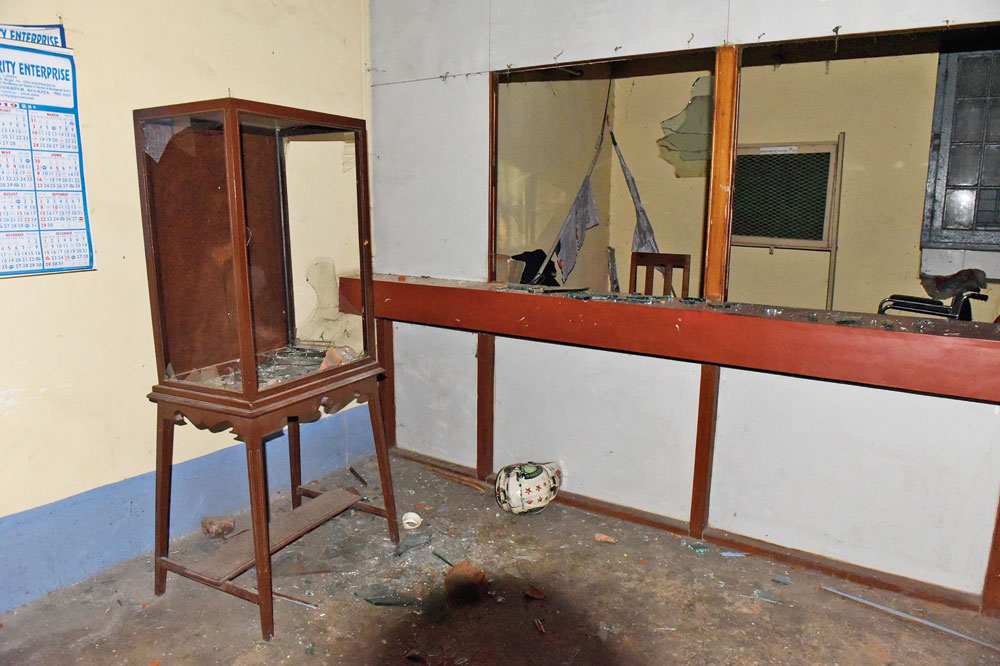 One of the greatest names of the Bengal Renaissance has been pitchforked into the final lap of an election so far yoked to muscular nationalism, calumny and preposterous claims.

Smashed to pieces by suspected BJP supporters, a bust of the polymath appears to have brought to the fore a culture clash that has marked the BJP’s foray into Bengal.

The vandalism, which carries the whiff of a targeted attack as the bust was accessed by smashing a glass case, has offered chief minister Mamata Banerjee a chance to underscore how Bengal’s pride has been trampled upon.

Mamata sought to paint the opponent as a group incapable of respecting Bengal’s cultural stalwarts. “I don’t have words to condemn the incident. I’m myself ashamed and I apologise… that as people of Bengal, we cannot respect Ishwarchandra Vidyasagar because of these BJP goons. These leaders will be leaders of the nation? Those who cannot show respect for the icons?… Courage is good, not dussahas…,” the Trinamul leader said.

Late on Tuesday night, Mamata uploaded Vidyasagar as the display picture on her social media accounts and that of the party. She also asked senior leaders of her party to do the same.

The unforeseen intervention pits two images against each other: one that projects Prime Minister Narendra Modi and his lieutenants as “chowkidars” and the other standing up to protect the legacy of Vidyasagar who had played a pioneering role in reforming Hinduism.

The clash of cultures has been brewing ever since Modi made the chanting of “Jai Shri Ram” a flashpoint in Bengal. Economical with the truth, the Prime Minister had created the impression that it was not being allowed to be chanted in Bengal.

A state where multiple faiths are practised and many deities are worshipped freely, “Jai Shri Ram” was rarely a dominant theme in Bengal’s religious ceremonies or festivals.

There is nothing wrong with allowing new practices to flourish but the BJP has been trying to inject an aggressive political element into what is essentially a matter of personal belief, turning the chant into a dare against other narratives.

The stage was set for a confrontation as Shah — upset as one of his rallies at Baruipur was cancelled on Monday because of alleged Trinamul Congress shenanigans — had dared Mamata to arrest him during his visit to Calcutta for Tuesday’s road show for chanting “Jai Shri Ram”.

But the script changed dramatically after the BJP chief’s cavalcade reached College Street and supporters clashed with those of Trinamul repeatedly — first in and around the university campus and then on the Vidyasagar College campus on Bidhan Sarani, where the bust of Vidyasagar was vandalised.

“Shah had come with the objective of canvassing for the BJP…. She turned the tables on him by accusing his party of leading the carnage at a heritage academic institution and finally vandalising the bust,” said a Trinamul leader.

“That the saffron camp is anti-Bengali has been one of her key poll planks. This evening’s chain of events suddenly gave her a chance to substantiate her claims…. She will maximise gains from this, going into the final phase,” he added.

When Mamata learnt of the clashes, mid-address at a Tollygunge Phari rally, she did not pull any punches.

“Goonda, goonda, goonda, Narendra Modi is a goonda, Amit Shah is a goonda…. They brought miscreants on hire from Uttar Pradesh, Bihar, Rajasthan and Jharkhand, specifically to go on the rampage here and destroy heritage in Bengal…. I will not spare them. This is my vow,” said Mamata who looked livid.

“I have emerged from agitations. I can go to Delhi and take over your home, your party office, in a matter of minutes…. This is crossing every limit. After doing this, do they think Bengal will like them?” she asked. 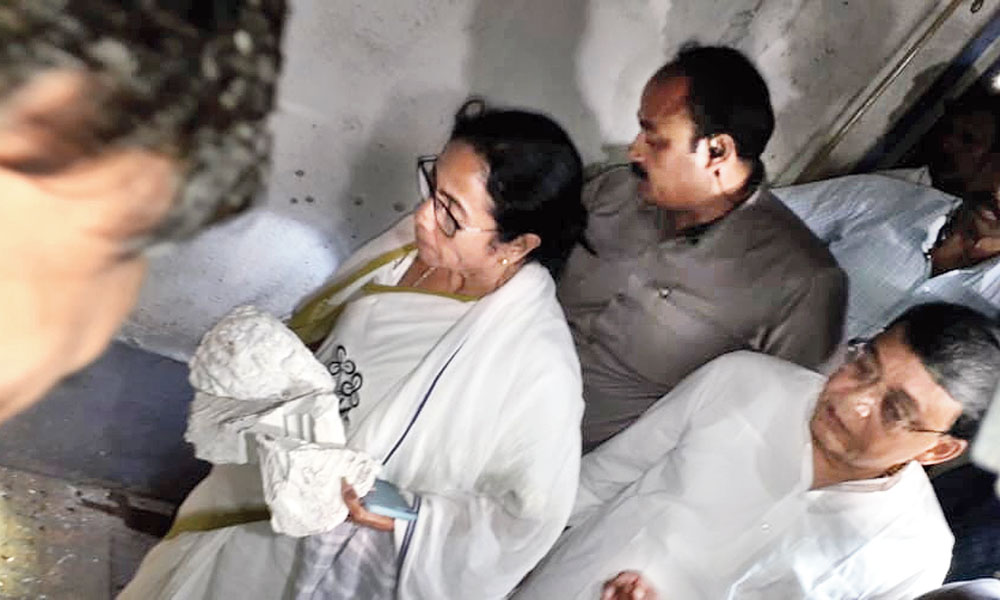 Chief minister Mamata Banerjee cradles the smashed pieces of the bust of Vidyasagar, the revered figure of the Bengal Renaissance, in Vidyasagar College on Bidhan Sarani in north Calcutta. Alleging stone-throwing from inside, BJP supporters taking part in Amit Shah’s road show had barged into the college and run amok.
Picture by Subhankar Chowdhury

Several senior Trinamul leaders said at night that she would give this a Bengal-versus-BJP spin and try to throw the saffron camp’s campaign out of gear for the remaining nine seats in the state.

On the other side, the BJP tried its best — in Calcutta and Delhi — to play the victim and accuse Mamata’s party of provocation, distancing itself from the allegations of vandalism.

Apparently having realised how this could end up being counterproductive for the BJP, leader after leader from the party’s national leadership took to social media and other avenues to allege a constitutional collapse in Bengal under Mamata. Shah issued statements accusing Trinamul of having orchestrated the violence.

A delegation led by Union cabinet ministers Nirmala Sitharaman and Mukhtar Abbas Naqvi rushed to Nirvachan Sadan, pleading for special measures and a bar on Mamata from campaigning for the final phase.

“The allegations of vandalism of the college and of Vidyasagar’s statue, being levelled against the BJP, are not true,” said Sitharaman.

However, Mamata had by then seized the momentum, promising to convert a road show scheduled for Wednesday into a protest march.

The CPM and the Congress state units, not willing to be left out, had issued unequivocal condemnation while planning their own protest demonstrations on Wednesday.

“The BJP, once again, walked right into a Trinamul trap and got itself into a mess in Bengal…. If we know her at all, Mamata would be ruing that this incident did not take place a few phases earlier,” said a Congress state unit leader.

After her rallies, Mamata rushed to Vidyasagar College, picking up the pieces of the broken bust herself. Then she held a meeting with several cabinet colleagues and officials, including Calcutta police commissioner Rajesh Kumar.

“The moment the rally ended, BJP goons broke away and started a fire at Vidyasagar College. They damaged Vidyasagar’s statue as well. Just before his bicentennial too. I have never seen such political riots in Calcutta in all my life. We will not spare them, we will give a fitting reply through votes,” she said.

Walking up to Calcutta University’s College Street campus, she asked: “Does he (Shah) know the heritage of this campus? Is he aware of the icons who studied here? He should be ashamed of this.”

Mamata asked several times why the Election Commission was not taking action against the BJP over such incidents.