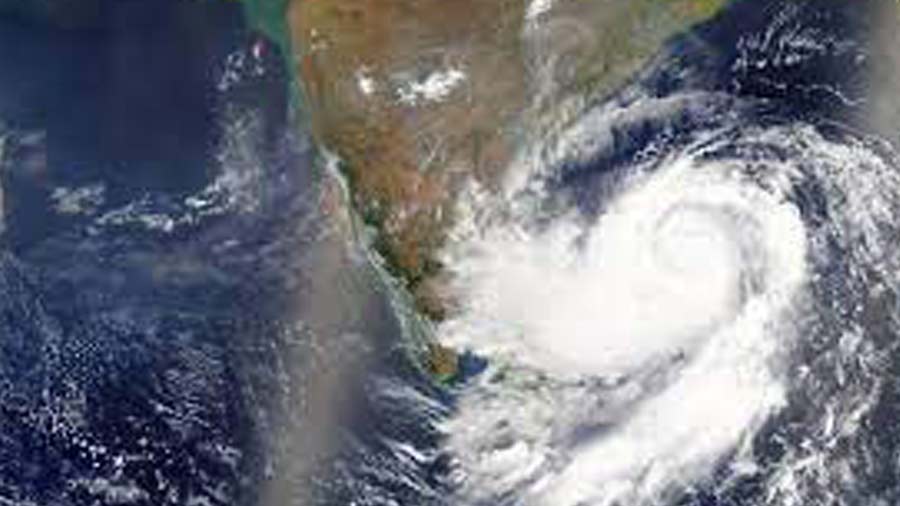 Heavy rain and wind gusts up to 100 kmph are likely to hit the coastal areas of West Bengal as a deep depression over Bay of Bengal intensifies into a possible cyclone by Sunday evening, dampening Kali Puja and Diwali festivities in large parts of the state.

The IMD said the weather system, which lay 700 km south of Sagar Island on Sunday morning and is moving in a northwestward direction, is very likely to recurve in a northeastward direction and cross the Bangladesh coast between Tinkona Island and Sandwip around early morning on Monday.

It is very likely to bring heavy to very heavy rain in coastal districts of South 24 Parganas and North 24 Parganas, and heavy rainfall in East and West Midnapore on Monday, while Caclutta, Howrah and Hooghly are likely to receive moderate rain on Monday and Tuesday, the Met Department said in a bulletin.

The development comes as people gear up to celebrate Kali Puja and Diwali in a big way after two years, amid easing Covid cases and curbs.

The cyclone is expected to be named Sitrang', as suggested by Thailand.

A Calcutta Municipal Corporation official said it has initiated steps to tackle any situation that may emerge owing to the impending cyclone in the metropolis, including keeping all pumping stations active and making arrangements for shifting residents from dilapidated buildings to local schools or community halls.

The weather office also said wind speed over sea areas will reach 90-100 kmph gusting to 110 kmph in north Bay of Bengal, asking fishermen not to venture into the sea.

It advised suspension of ferry services in Sunderbans and waterbound tourist activities at seaside resort towns of Digha, Mandarmoni, Shankarpur, Bakkhali and Sagar on Monday and Tuesday.

Meanwhile, the Odisha government said it has prepared for possible heavy rain on Monday and Tuesday, when the cyclone passes parallel to the state's coast.

The IMD has issued a yellow' warning for heavy rainfall (7-11cm) at one or two places over the districts of Kendrapada, Jagatsinghpur and Puri till Monday morning.

It also warned of heavy rainfall at one or two places over Balasore, Bhadrak, Jajpur, Kendrapada, Jagatsinghpur, and Cuttack from Monday morning to Tuesday morning.