Following the development, Mamata could not spend much time at Nabanna and several activities related to the Covid fight were affected 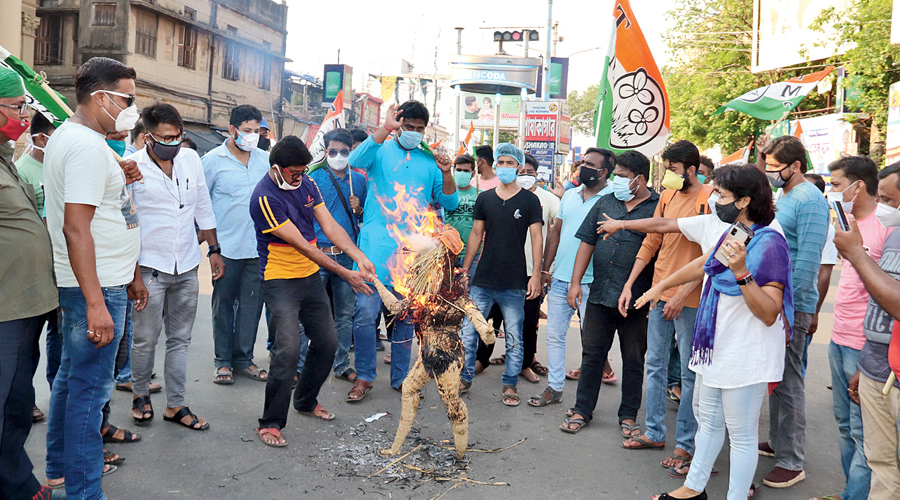 The first weekday after the state government imposed stricter restrictions to combat Covid-19 was lost on Monday as far as the fight against the disease was concerned as politics behind the arrests of two ministers in the Narada case took centrestage.

Following the arrests, chief minister Mamata Banerjee rushed to CBI office at Nizam Palace and stayed there till the evening. Hence, she could not spend much time at Nabanna during the day and several activities related to the Covid fight were affected.

Although there was a scheduled cabinet meeting, Mamata could not attend it physically. She spoke at the session for a while over the telephone that was put on speaker mode.

The chief minister touched on a few issues but did not say anything on the pandemic, sources said.

“Usually, the chief minister outlines the next course of action of the government at cabinet meetings. But she could not make her thoughts clear and could not attend the meeting. The directions of the chief minister were needed after the state had announced stricter restrictions for 15 days,” said a source.

Mamata, however, reached Nabanna in the evening and held meetings with top government officials. But she could not attend the meeting that was called to take note of the ground realities in several districts. Based on the information gathered from districts, further decisions are taken.

The arrest of panchayat minister Subrata Mukherjee by the CBI in the Narada case hurt severely the efforts to plan how the 100-day job scheme could be carried on during the period of the stricter restrictions.

The panchayat department would hold a meeting on Tuesday with districts authorities to ensure that the job scheme is not affected and poor people don’t face a problem to earn livelihood.

“The meeting is scheduled for tomorrow, but planning is required before that. The planning part was hurt severely as the minister could not hold any meeting today,” said a source.

An official pointed out that the meetings were important to fix a plan through which the poor people could be given jobs during the lockdown-like situation by maintaining all Covid-19 protocols.

“We had successfully done it soon after the nationwide lockdown had been lifted last year. This year also, we are planning to go for such activities to give respite to the poor people in rural areas,” said a source in the panchayat department.

Sources in the Calcutta Municipal Corporation said several activities, including swab collection of suspected Covid patients for RT-PCR tests, were affected because of the absence of Firhad Hakim, who is the chairman of the board of administrators at the civic body.

Along with Mukherjee, minister Hakim was also arrested by the CBI.

“It’s not that the work was stalled. The officers were doing their job but the guidance from a public representative was missing,” said a source.

Hakim, who also monitors the satellite centres of various Covid hospitals, could not attend a meeting which was supposed to plan an increase in the number of beds at some safe homes.

“The meetings could be held tomorrow. But a day was lost and 24 hours is very precious during a pandemic,” said a source.