Civic poll results: Left ahead of BJP in vote share 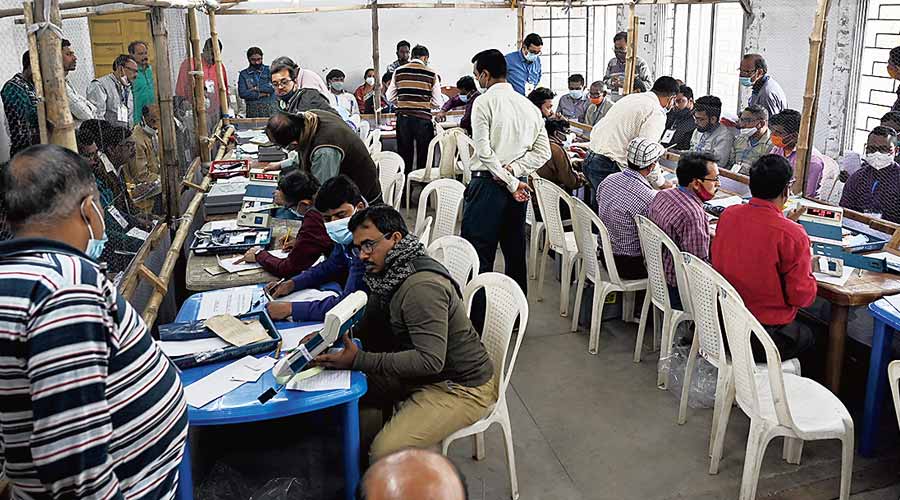 Results of Sunday’s elections to the 107 civic bodies showed on Wednesday that the Left dislodged the BJP to emerge second in terms of poll percentage, something that was visible since the Calcutta Municipal Corporation polls held in December last year.

According to provisional data obtained from the State Election Commission, the cumulative vote share of the four Left parties is 14.2 per cent, while that of the BJP is 12.6 per cent. BJP candidates, however, have won in 63 wards, more than the Left tally of 57 wards.

However, the CPM  managed to win Nadia’s Taherpur municipality.

Less than a year ago on May 2, when the results of the Assembly polls were declared, the BJP was the main Opposition party with over 38 per cent of the votes polled and 77 seats. The Left, for the first time since 1947, went without representation in the Assembly.

However, the saffron party's fortunes have slid since then.It failed to win any of the four bypolls held last year.

In December 2021, the Left Front, for the first time since 2019, finished ahead of the BJP with 11.87 per cent votes against the saffron camp's 9.19 per cent in the Calcutta corporation polls. The BJP’serosion continued in the polls thereafter. In Bidhannagar and Chandernagore corporations, the Left came second. The BJP somehow retained second place in Asansol and Siliguri.

The outcome of the 108 civic bodies — 107 that went to polls on Sunday and Dinhata, where Trinamul won unopposed earlier — shows that the BJP’s vote share has gone down by around 26 percentage points in the last 10 months.

The Left Front secured a little over 5 per cent vote share in the 2021 Assembly polls on its own, and a little over 7 per cent taking into account alliances with the Congress and the Indian Secular Front. However, Wednesday's results show an increase of 9 percentage points in Left votes. The CPM, the largest of the four Left Front partners, got  11.83 per cent votes.

The slide in BJP votes has ruffled the party leadership. BJP MP and state general secretary Locket Chatterjee taking to her Twitter handle on Wednesday evening to write a single word: “Introspection”.

Several others in the BJP blamed the constant factionalism and the leadership’s failure to reach out to the masses.

BJP's state chief Sukanta Majumdar, however, blamed Trinamul for “helping” the Left Front. “They want to confuse voters on who the actual Opposition is. Trinamul goons rigged polls for the Left Front as well,” he claimed.

Sources in the CPM credited its newfound success largely to its young leaders, who worked as Red Volunteers particularly during the pandemic.

Left leaders also feel the anti-Trinamul vote, which had shifted to the BJP in 2019 and in 2021, is slowly but steadily making a return. “People thought only the BJP could stop Mamata. Now they have seen the BJP is a complete failure,” a Left leader said.

Congress secured 59 wards and over 5 per cent votes.