On her first trip abroad, Kumartuli's best-known woman idol-maker China Pal is headed to - where else but China. 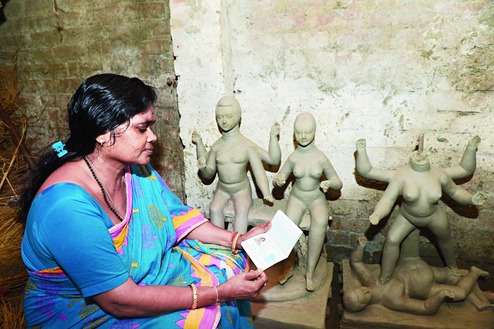 Kumartuli: On her first trip abroad, Kumartuli's best-known woman idol-maker China Pal is headed to - where else but China.

"We have heard China Pal is good with idol-making. She will make idols at a folk master craftsmanship show and display the significance of different procedures," said consul general Ma Zhanwu.

Along with her reputation, her name also carried weight. "We thought she loves China or Chinese tea but when we spoke to her, it turned out that it has to do with her being the fourth child," smiled Ma.

When Metro spoke to China, the explanation ironically turned out to have to do with her parents' desire for family planning.

"I am the youngest of six siblings and am the fourth of four daughters. My elder sisters are called Durba, Kalyani and Uma. So my parents named me ' Chai na (do not want)'," China said. "I loved idol-making ever since I was 14 but father was opposed to a girl going to his workshop. We, the women of Kumartuli, help out with small jobs but never do we come to the forefront alongside the men."

Ironically, when Hemanta Pal fell ill, it was his youngest daughter who took over his trade.

She is unaware how the consulate heard about her but points out that she has crafted the idol at EC Block's Durga puja in Salt Lake twice. That is where the consulate office is located and the consul general traditionally is a guest at the pandal inauguration.

So far, the 45-year-old's farthest journey has been to Manali. "I did get a chance to go to Africa or some such place in 2015 but things did not fall in place."

Even this journey was riddled with uncertainty as China did not have a passport and even when she applied for one on May 4 on learning of her nomination, she mistakenly opted for a normal - and not a tatkal (urgent) - type of application. And there were barely hours left for the consulate's document submission deadline to expire on Friday when she received her passport from the Beadon Street post office.

Passport in hand, China could finally turn her attention to the requirements of the journey to China in the afternoon. "I am planning to carry two half-finished and detachable mini models of Durga and Kali. I will colour them here but carry the shola pith accessories with me to do the decoration in front of the audience there," said China.

Terracotta artiste Ashish Kumar Biswas of Thakurnagar, Bongaon, will also be going with her. The winner of the Presidents' Award for 2014-15 is planning to carry terracotta Buddha figurines, Chinese motifs and fridge magnets.

The trip is for 10 days and the expo in Kunming, the capital of Yunnan, the province of China closest to Bengal, starts on June 13.