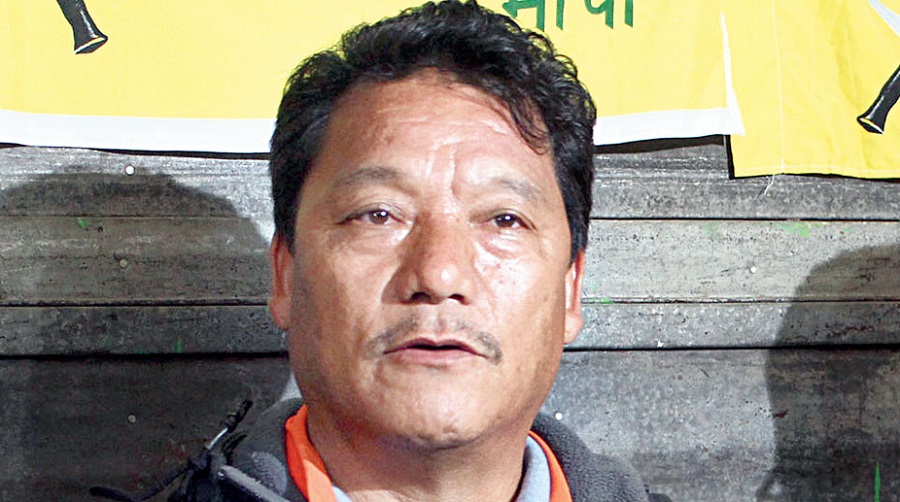 Bimal Gurung. On Monday, the home ministry issued a corrigendum stating “that the subject of the meeting in the heading and body of the notice may be read as “issues to Gorkhaland Territorial Administration”.
File picture
Vivek Chhetri   |   Darjeeling   |   Published 06.10.20, 01:04 AM

The Union home ministry issued a “corrigendum” on Monday evening and changed the agenda of the tripartite meeting slated for Wednesday from “the issues related to Gorkhaland” to “issues to Gorkhaland Territorial Administration”.

“The sudden change in the agenda is nothing but an egg on the face of not only the BJP but also the Bimal Gurung faction of the Gorkha Janmukti Morcha. Both were portraying the scheduled talks as the beginning of a process to meet the Gorkhaland demand,” said an observer of hill politics.

The Bengal government and the Gurung faction of the Morcha were invited to the talks.

On Saturday, the Union home ministry had issued a letter stating that the agenda was to “discuss the issues related to Gorkhaland”.

On Monday, the home ministry issued a corrigendum stating “that the subject of the meeting in the heading and body of the notice may be read as “issues to Gorkhaland Territorial Administration”.

Following the latest development, Gorkha National Liberation Front leader Neeraj Zimba, who had won the Darjeeling Assembly seat in a bypoll on a BJP ticket, also said the Union home ministry should be “more serious”, get “intelligence report” about the ground realities from Darjeeling and stop getting “confused” regarding the issue of Gorkhaland.

Zimba was probably peeved that elected members like him and Darjeeling MP Raju Bista were not invited to the meeting. His allegation of the home ministry not being serious probably stood ground as the letter was issued to the “Gorkha and Janmukti Morcha”.

The Binay Tamang camp of the Morcha was in the I-told-you-so-mode following the corrigendum.

“They are taking the hills for a ride. Such has been the callousness that even the party is addressed as ‘Gorkha and Janmukti Morcha’. I had said yesterday (Sunday) that something was fishy as they were inviting the principal secretary of the GTA and the Darjeeling district magistrate to the meeting where they claimed the issue to be discussed was Gorkhaland,” said Keshav Raj Pokhrel, a spokesman for the Tamang camp.

Earlier in the day, Roshan Giri, the general secretary of the Gurung camp, had asked the GNLF and the CPRM to accompany them to the Gorkhaland meeting. The CPRM had decided to attend the meeting as a “watchdog” so that no issue other than Gorkhaland was discussed.

The GNLF had not yet made up its mind and was pondering whether the “meeting has really been called to discuss Gorkhaland”.

Following the change in the agenda of the meeting, none of the hill parties is expected to attend the meeting. The Gurung camp had not reacted to the latest development till the time of filing this report.

“The pan-Bengal sentiments against the creation of Gorkhaland probably forced a change in the BJPs thought,” said an observer.

The Mamata Banerjee government has decided against attending the tripartite talks in a bid to register its grievance over the manner in which the meeting was called.

Sources in the government said the stand remained unchanged even after the Union home ministry had issued a corrigendum, saying the meeting’s agenda would be the “issues to Gorkhaland Territorial Administration”. “The Centre can inform the state that a meeting has been called. But it cannot dictate who should attend the meeting. It is the state’s prerogative to decide who would represent it at the meeting,” said a senior official.

So far, sources said, the Centre used to send letters to the chief secretary or the home secretary, informing the state about the date and the subject of the meetings.

“But this time, the Centre has sent letters to the district magistrate and the principal secretary of the GTA, asking them to attend the meeting… even the corrigendum says it. This is something but interference in the state’s affairs, which can’t be accepted,” said another official.