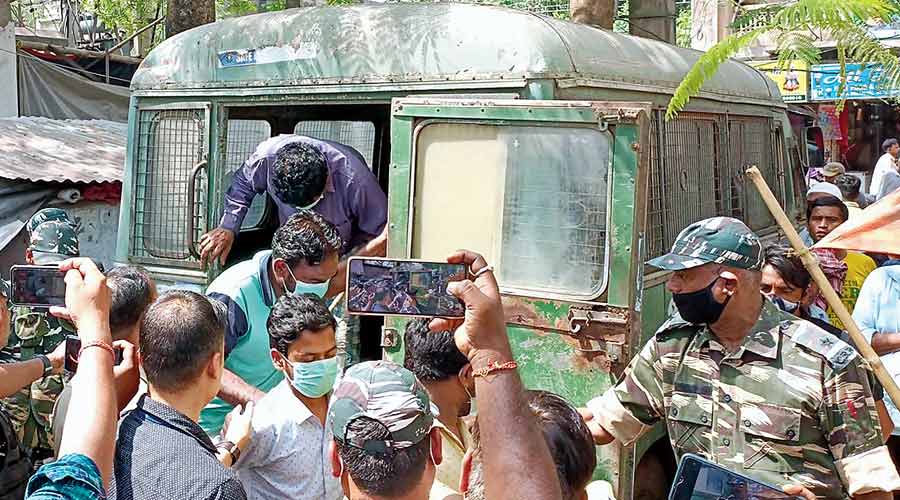 The vehicle with the accused in the Bogtui carnage case arrives at Rampurhat court on Wednesday
Telegraph picture
Snehamoy Chakraborty   |   Bolpur(Birbhum)   |   Published 07.04.22, 02:19 AM

The CBI on Wednesday appealed to a court in Birbhum’s Rampurhat for permission for a polygraph test on the eight accused, including arrested Trinamul leader Anarul Hossain, in the Bogtui massacre case to check the veracity of their claims made during interrogation.

The polygraph test — popularly called the lie-detector test — is a procedure through which physiological indicators such as blood pressure, pulse, respiration and skin conductivity are measured when a person is responding to a series of questions. Experts, with a certain degree of confidence, can assess if the respondent is lying or not by checking the data.

The Rampurhat court will hear the CBI plea on the polygraph test on Friday in the presence of all the eight persons.

“The CBI sought permission for a polygraph test for eight persons, including a minor. Anarul was not present in the courtroom today (Wednesday) and so we appealed to the court to hear the appeal in the presence of all eight persons. The court allowed the hearing of the plea on April 8,” said Soumen Banerjee, a defence lawyer.

On Wednesday, the CBI produced 18 out of 21 persons arrested in the carnage case in the court of additional chief judicial magistrate Souvik Dey, who sent all of them to 14 days of judicial custody after rejecting their bail plea.

Armed goons had attacked Bogtui on March 21 night and set several houses on fire in an apparent retaliatory action to the murder of Bhadu Sheikh, deputy chief of the Trinamul-run Barshal gram panchayat, earlier that evening. Nine lives were lost in the carnage.

“The role of all the eight persons is very important... We want to double-check the information they shared during interrogation,” said a CBI source.

Police sources said that any agency may move court to seek permission for a polygraph test when statements of the persons do not match probe findings.

Advocates said the polygraph test can’t be done without consent of the accused.

“A polygraph test is allowed only when the person concerned gives his or her consent,” said Bikash Ranjan Bhattacharyya, a senior advocate in Calcutta High Court.

He added: “In my view, going for such a test indicates the incapability of the investigating agency. The duty of the agency is to use its intelligence to pull out information... the polygraph test is the easiest method.”

Sources said the CBI sleuths had on Tuesday night gone to Bogtui with the arrested persons to reconstruct the carnage.

CBI sources said they are wrapping up all the evidence and statements before submitting its report to the Calcutta High Court on Thursday.

“We are trying to figure out the role of everyone, including police, firefighters and local politicians using a time-map,” said a source.