Other brothers behind Stan Swamy

The priest should be released, otherwise all minorities will come together and agitate in the country, the Imam of Nakhoda Mosque said 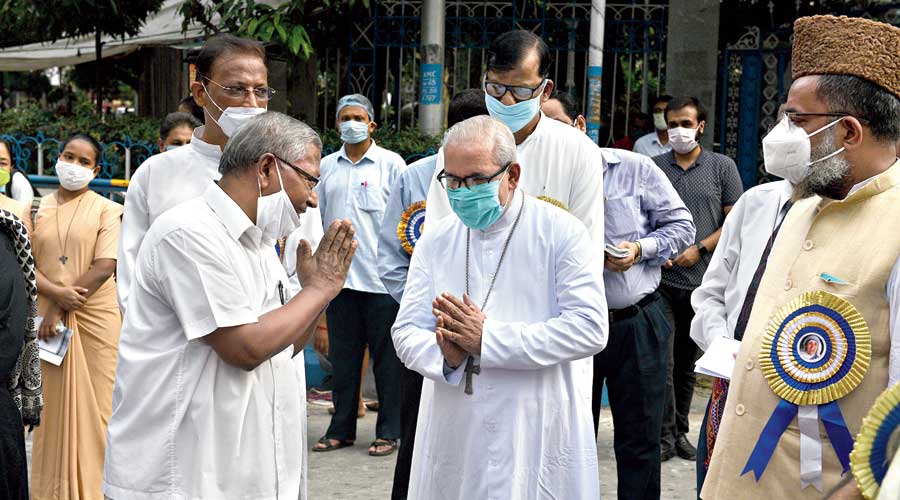 The Centre should release Father Stan Swamy, otherwise all minorities will come together and agitate, an Imam of Nakhoda Mosque said at the end of a silent walk on Park Street expressing solidarity with the 83-year-old Jesuit priest.

“If one brother is facing injustice, the other brothers will not be silent spectators…,” said Maulana Shafique Qasmi.

Maulana Qasmi added: “Father Stan Swamy has been arrested without having committed any qasoor and it is our request that the government release him unconditionally. Else, all minorities in the country will agitate against this.”

The Imam was part of a protest where a group of Christian priests and nuns walked through Park Street. School principals and teachers joined them.

Archbishop Reverend Thomas D’ Souza, who joined the event after the walk concluded, said: “The way he was treated, very inhuman way, cruel way I might say. It is not acceptable to us. Therefore, along with all countrymen, right-thinking people, people of goodwill, we also want to show our displeasure and certainly want to protest against that treatment to an elderly, sick person who has worked for the poor. Therefore, today we appeal and demand that he be released and like him so many others….

“Thank you for coming here to show your solidarity for this particular cause. Once again, we appeal to the government to release Father Stan Swamy.”

The archbishop added: “We are here to show our solidarity with him. He is not alone but we are with him so that his suffering and the cause for which he has fought and has been fighting… for the tribals, the Dalits, their issues of injustice, their human rights, has been uppermost for him all his life. To tell him we are with him.”

Maulana Qasmi said: “We condemn this arrest… and appeal to all that people should raise their voice against those who are being oppressed…. If we want everyone to be good, we have to treat everyone with love and sympathy. We should not think who is being subjected to cruelty. If one person is being subjected to injustice, all others are brothers and sisters. If one brother is facing injustice, the other brothers will not be silent spectators. It’s an appeal to the government to release Father Stan Swamy.”

Father Stan Swamy was arrested in Ranchi on October 8, taken to Mumbai the next morning and sent to judicial custody till October 23. Father Stan Swamy is from the Jamshedpur province of the Jesuit Order.

The vice-chancellor of St. Xavier’s University, Father J. Felix Raj, one of the leaders of the rally, said the Calcutta protest would inspire many others to raise their voice.

“This is the 10th day he (Father Stan Swamy) is in jail. Let us wait and see what happens…,” Father Felix Raj added.

Father Felix Raj said the case against Father Stan Swamy could continue. “But there must be a compassionate, concerned approach towards a senior citizen.”

The number of participants at the rally was restricted to abide by Covid protocols.

Schoolteacher Beulah Caleb said: “Covid or no Covid, it is important to come for a cause like this and make the government listen.”

The walk, organised by the Mother Teresa International Award Committee, started from the gates of St. Xavier’s College and ended in front of the statue of Mother Teresa at the crossing of Park Street and Camac Street.