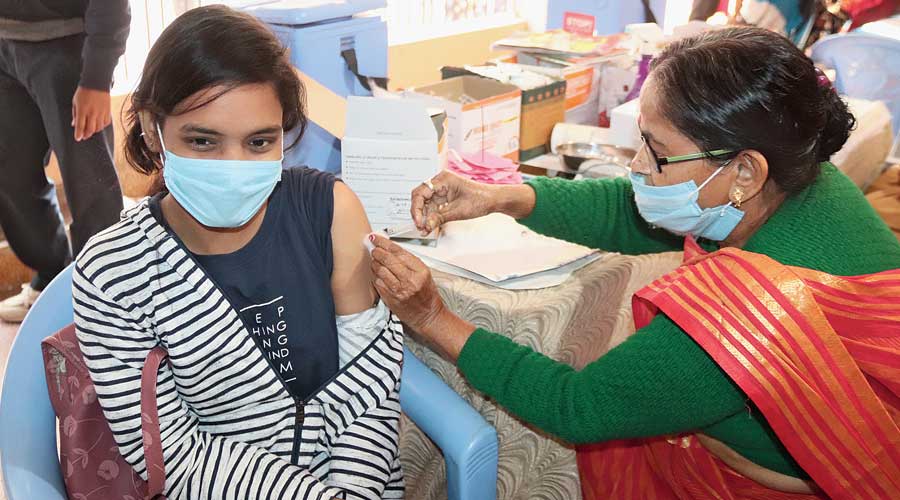 A student being administered the Covid-19 vaccine in Burdwan on Wednesday.
Picture by Munshi Muklesur Rahaman
Meghdeep Bhattacharyya   |   Calcutta   |   Published 06.01.22, 01:57 AM

The state also reported 6,438 recoveries and 17 deaths, including five fatalities from Calcutta, on Wednesday, leading to a rise by 7,567 in the total of active cases to 33,042, the highest since June 6 last year.

As recently as on December 28, the state’s total of new infections was 752, including 382 from Calcutta. Then, the state had 7,457 active cases.

The surge, apparent in the numbers since December 29, was initially attributed by sources in the state government to the general disregard for Covid-19 safety protocols among revellers since the run-up to Christmas.

This basically means that one of every four tests in the state returning positive. A positive confirmation rate of up to 5 per cent is considered tolerable in a pandemic situation. At the peak of the second wave last year, it had climbed to 33 per cent.

Bengal’s recovery rate slid further to 96.85 per cent on Wednesday, from 97.28 on Tuesday, having dropped by nearly two percentage points in just about a week. The national rate is 98.01 per cent now.

Calcutta and its immediate neighbourhood of North and South 24-Parganas, Howrah, Hooghly and Nadia accounted for 11,672 or 83.24 per cent of the new cases on Wednesday.

Sixteen of the state’s 23 districts reported zero deaths. The state’s mortality rate is 1.18, while that of the nation is 1.33 per cent.

According to the Union health ministry figures released on Wednesday morning, Bengal has 20 omicron cases (including four recoveries), and is 13th among the states with the highest number of such cases. The top three spots are occupied by Maharashtra, with 653 cases, Delhi, with 464, and Kerala, with 185.