Empty booths and open drop gates at the airport on Thursday. The booths are usually manned and cars going in are handed tokens mentioning the time of entry.
Pictures by Pradip Sanyal
Sanjay Mandal   |   Calcutta   |   Published 01.08.19, 08:45 PM

Airport officials said when representatives of Mahesh Sunny Enterprises Pvt Ltd, hired for three months, turned up around midnight to start work, close to 60 men entered their office and threatened them.

The men prevented the agency from taking control of the toll booths and the booths in the parking lot, demanding that it hire all the workers recruited by the previous agency. Mahesh Sunny Enterprises has brought around 15 people from north India to run the booths.

Throughout Thursday, all the booths remained unmanned and parked vehicles were not charged any fee.

“The new agency is unable to take over the car park site due to obstruction from some miscreants. This is resulting loss of approximately Rs 6 lakh per day for the government,” a letter written by the Airports

Authority of India to the Bidhannagar police commissioner said.

Officials said talks to resolve the crisis were on till late on Thursday but no solution was in sight. 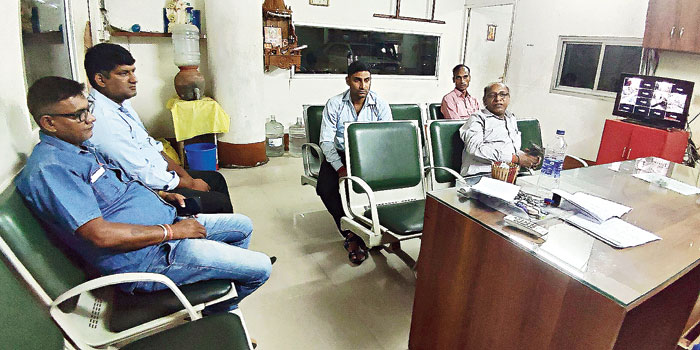 Employees of Mahesh Sunny Pvt Ltd, who came from Delhi but were not allowed to work, at the airport’s parking bay office
Pictures by Pradip Sanyal

An officer of the Bidhannagar commissionerate said a meeting was called at the airport police station with representatives of the agency and members of the Trinamul-backed union on Thursday.

“We told the union members that it was up to the agency to decide who they would hire. We asked the agency to start work and have warned the previous employees not to create trouble. We told them that anyone creating problems would be arrested,” the officer said.

Sources said the previous agency, whose contract expired on Wednesday night, had hired around 80 people to run the parking operations.

“A group of 50 to 60 men entered our office and threatened us. They said the people we brought with us could not work. But there are several workers here who did not have any legal contract with the previous agency and they don’t have provident fund accounts,” said Babulal Yadav, general manager of Mahesh Sunny Enterprises. “We are unable to start collecting parking fees.”

He said some Trinamul leaders turned up at his office during the day and told him the agency would not be allowed to start work unless the issues were resolved.

“The agency has brought people from Haryana and Delhi. They want to take away jobs of local boys and replace them with outsiders. We have told them they cannot terminate (the contract) of anyone working at the moment,” said Barun Natya, working president of the Trinamul-backed NSCBI Airport Contractual Workers’ Union.

“The agency doesn’t want to hire 20-odd people saying they don’t have PF accounts. We won’t allow that to happen.”

Airport sources said the licence fee for the three-month contract with Mahesh Sunny Enterprises was Rs 1.43 crore a month, compared with Rs 1.11 crore a month the previous agency had to pay.

Metro has reported several times how union leaders would force private agencies to retain people who would not work. Trolley retrieval had suffered because of such stand of the union leaders.