While nearly 20,000 showed up for the Trinamul rally on Wednesday, sources said a far greater number — some said a lakh — marched on Thursday 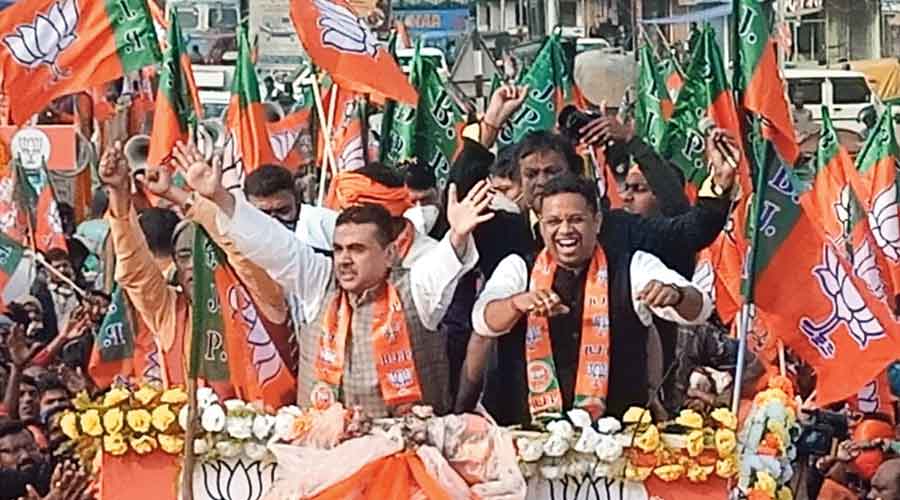 BJP neo-convert Suvendu Adhikari’s popularity on home turf was on display on Thursday with supporters taking over the 5km stretch of Contai’s Mechheda bypass.

While nearly 20,000 showed up for the Trinamul rally on Wednesday, sources said a far greater number — some said a lakh — marched in Adhikari’s road show on Thursday that ended with a meeting at the Contai bus stand where he announced a rally on January 8 in Nandigram to counter Mamata’s meeting the day before.

While Adhikari did not specifically cite where the allegiances of his father Sisir and brothers Soumendu and Dibyendu lay at the moment — the whole clan has been associated with Trinamul — he said: “The Adhikaris would stand first over here (read Contai), and the rest second.”

Speaking at the meeting, Adhikari allied himself to his new party’s ideological line, saying: “Bengal may be my home but India is my land... The common man is with us. They have given the TMC a befitting reply.”

The former transport minister claimed that the blessings that people showered on him on Thursday showed that he did the right thing by joining the BJP.

Adhikari specifically chose to hit out at Firhad Hakim and Saugata Roy — who publicly denounced him on Wednesday —  and questioned their political ethics.

“They are trying to ensure that I languish in my home district, but that will not be the case. They cannot rein me in,” Adhikari said.

He added that while he had never needed any help to win elections, he reminded Roy that he, Adhikari, had to campaign for the Trinamul leader for the Bongaon North bypoll.

Without naming Mamata Banerjee’s nephew Abhishek, he said the Trinamul MP’s effort to stifle him by using state force would prove futile. Before ending his speech with cries of “Jai Shri Ram” and “Bharat Mata ki Jai”, Adhikari said he would only rest after ensuring the BJP’s victory in Bengal.