Arjun Chowrasia’s feet were touching the ground and it was clear that he was killed before being hanged, a party supporter in the neighbourhood alleged 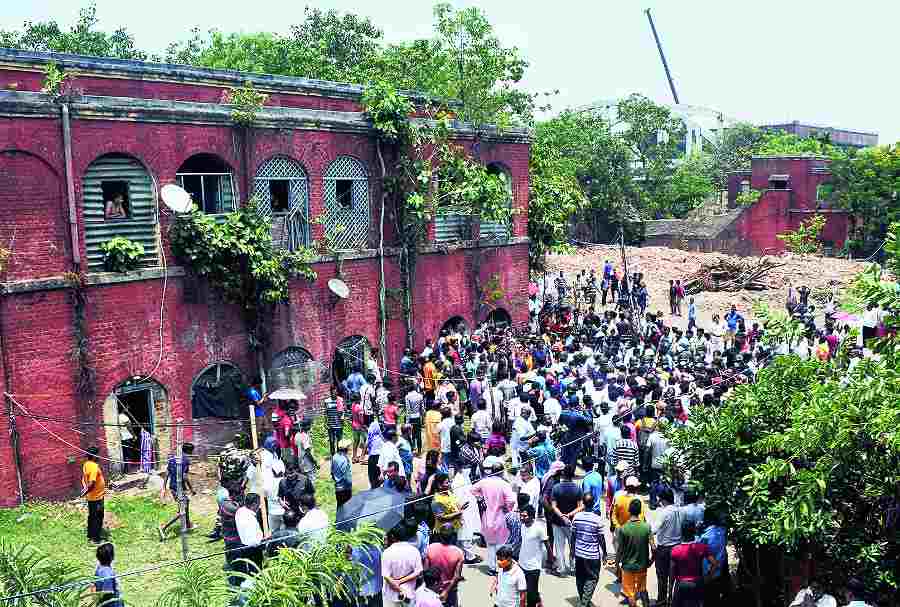 A crowd gathers in front of the Cossipore building where Arjun Chowrasia was found hanging on Friday.
Monalisa Chaudhuri   |   Cossipore   |   Published 07.05.22, 01:51 AM

A 26-year-old leader of the BJP’s youth wing in north Calcutta was found hanging inside an abandoned quarters of the Cossipore railway colony not far from his own home on Friday morning.

Arjun Chowrasia’s death, on a day Union home minister Amit Shah was in Calcutta, triggered unrest in the neighbourhood amid allegations that the vice-president of the Yuva Morcha in Cossipore, had been murdered and hanged.

“His feet were touching the ground. It was clear that he was killed and then hanged,” a BJP supporter in the neighbourhood alleged.

As officers from Chitpur and Cossipore police station visited the spot to take away the body, allegations surfaced that Chowrasia’s family and relatives, along with his party colleagues, snatched the body and held it hostage inside a building, refusing to release it till Shah arrived, the police said.

Reinforcements from the central division came to the spot under the leadership of the deputy commissioner (central), after which the police could take the body in a police vehicle to R.G. Kar Medical College and Hospital.

Trinamul Congress leader Atin Ghosh was present at the spot when the drama over the body unfolded. Ghosh told reporters that Chowrasia had worked for Trinamul during the recently held civic polls. Chowrasia’s family denied the claim.

Shah, who flew in from Bagdogra around 2.15pm, went straight from the airport to Cossipore and met the family members of the deceased.

“We have no faith in the state police. The way they hijacked my brother’s body only speaks about their intention. Amit Shahji came to meet us and assured us that the central government is with us,” said one of Chowrasia’s brothers.

BJP MP Dilip Ghosh said it was not unusual for Trinamul to “manipulate post-mortem reports”.

“They are in the habit of manipulating post-mortem reports. We do not trust them. We want a CBI inquiry,” he said.

The family alleged that Chowrasia's mother and sister were manhandled and pushed away by police personnel trying to take away the body.

The body was first taken to R.G. Kar Medical College and Hospital for a post-mortem. However, the BJP moved Calcutta High Court demanding a second inquest at the Command Hospital in Alipore, which was accepted.

The court also ordered Calcutta police commissioner Vineet Goyal to ensure quick and safe passage for the body from R.G. Kar to the Command Hospital and also to provide security to the family of the deceased.

An unnatural death case has been registered with Chitpur police station.

No senior police officer agreed to comment officially on the incident.