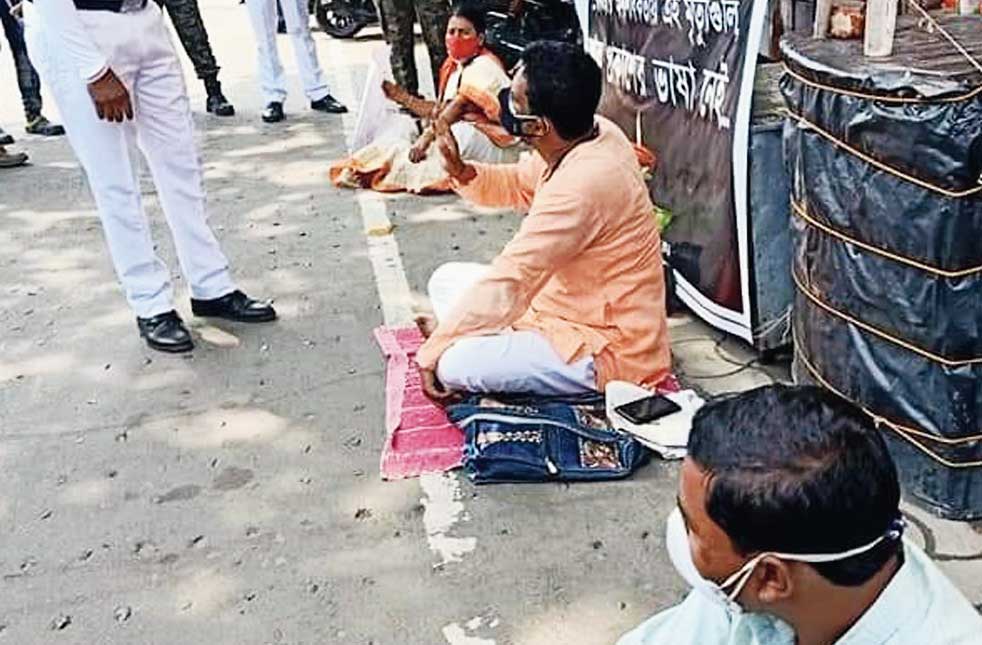 Three BJP MLAs descended on the deserted Hill Cart Road here on Sunday morning and held a sit-in demonstration to protest alleged mishandling of Covid-19 by the Mamata Banerjee government.

Police arrested Shankar Ghosh, Shikha Chatterjee and Anandamoy Barman, the BJP MLAs of Siliguri, Matigara-Naxalbari and Dabgram-Fulbari, respectively, under relevant sections of the Disaster Management Act and released them later.

The trio’s protest in violation of strict curbs put in place by the state government to contain the contagion drew flak from BJP leaders who feared the drama would backfire on the party as the Narendra Modi dispensation came under international criticism for poor handling of the pandemic.

Ghosh, Chatterjee and Barman started the dharna at Hashmi Chowk around 10am.

“People are dying here every day…. the administration, the health department and the civic body have completely failed to address the situation. Being people’s representatives, it is our duty to raise voice against the death of helpless people because of lack of proper facilities,” said Siliguri MLA Ghosh, who had left the CPM and joined the BJP a few days before the Assembly polls.

The MLAs said private nursing homes and a section of ambulance drivers were charging exorbitant fees from Covid patients and their families in and around Siliguri.

“There is an acute shortage of oxygen and cylinders and accessories items are not available at normal rates,” said Barman.

The trio also alleged that they were never invited to any administrative meeting where they could make some suggestions for the improvement of health care facilities in Siliguri city and the subdivision and the adjoining areas of Jalpaiguri.

BJP insiders said the MLAs should have refrained from organising the protest.

“Our party and the government at the Centre are under attack for mishandling the Covid situation... Now, if we start attacking others, it will boomerang on us,” said a state BJP leader.

According to him, the BJP had been highlighting the post-poll violence in Bengal till the other day to keep the focus away from the Covid situation. “Now, our MLAs go and sit on a dharna... It was not needed,” he added.

Trinamul Congress leader and chairperson of the board of administrators at the Siliguri Municipal Corporation Gautam Deb said the BJP MLAs’ protest was to reap political dividends out of a crisis.

“The Prime Minister and his government have miserably failed to counter the second wave of the pandemic that is claiming thousands of lives every day. If they were protesting against the deaths, they should also raise voices over what is happening across India, for which the BJP government is responsible. There is a dearth of vaccines and people are dying because of oxygen shortage. But the Prime Minister looks oblivious to the disaster and is focusing on his dream project of central vista,” said Deb.

He added after Mamata Banerjee had assumed charge as the chief minister for the third time, she had been working on war footing to handle the situation.

“In the past 10 days, beds have been increased at government and private hospitals, and oxygen plants installed. New safe homes have been opened, additional doctors and paramedics engaged and steps were taken to prevent anomalies in healthcare,” said a government source.

“We have never seen any of these MLAs standing beside Covid patients and their families. Instead, they are indulging in cheap political gimmicks,” said Deb.

When police officers asked the MLAs to lift the dharna and leave, the trio refused. After about an hour, the MLAs were whisked away to the police station. Later, they were released on bail.

The MLAs’ protest has not gone down well with Siliguri residents.

“Instead of resorting to protests, the MLAs should have joined hands with other BJP MLAs and mounted pressure on the Centre for supply of more vaccines, oxygen and essential health equipment,” said Swati Dutta, a homemaker who witnessed the death of some of her near ones from Covid.