The central leaders have failed to realise the impact of Durga puja in Bengal politics and that was why they didn’t make any efforts to use the opportunity, a saffron party leader said 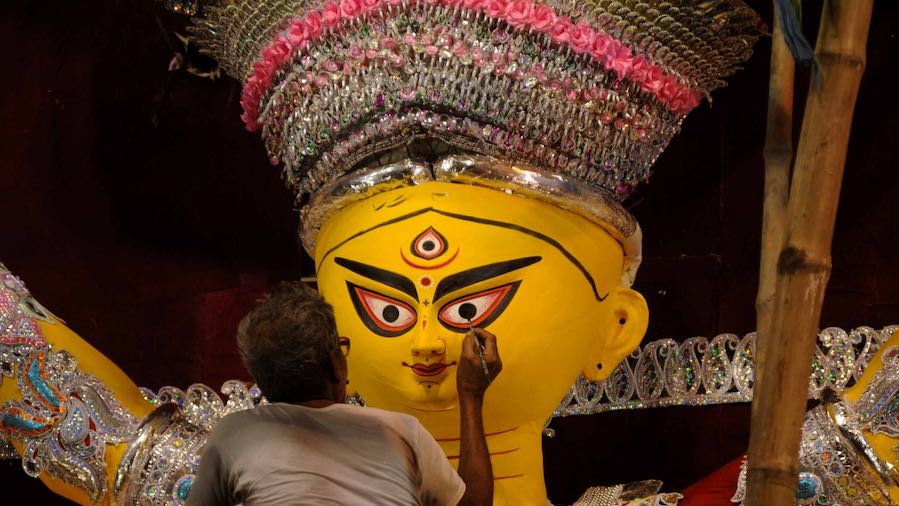 A section of Bengal BJP leaders is annoyed with the central government for allowing Mamata Banerjee and her administration to take the entire credit for the inclusion of Calcutta’s Durga Puja on the Unesco list of tangible cultural heritage.

The disquiet in the party is significant at a time when the minister of state for culture Meenakshi Lekhi is scheduled to attend an event at the Indian Museum in the city on Saturday to felicitate 30 selected artisans and artists involved with Durga Puja. Minister of state for education Subhas Sarkar will also be present at the event.

While an e-invitation for the programme mentions members of several Puja committees, monasteries, artisans of Kumartuli, Dhakis along with danseuse Dona Ganguly and singer Shreekumar Chatterjee will be present at the event, sources said it was going to be “a very humble event”.

“The programme is basically a part of the exhibition tracing the evolution of Durga in Hindu mythology, which is being held at the museum. It will be nothing close to what we saw on Red Road on September 1,” a senior BJP leader said.

On September 1, Mamata had organised a rally from Jorasanko to Red Road, where a grand programme was held, in order to thank Unesco for its recognition of the Puja. Delegates from multiple countries as well as Unesco participated in the event. Eric Falt, the director and Unesco Representative for its New Delhi office, was also there along with his colleagues. Several BJP insiders said they were sure that Saturday’s programme would be nothing in comparison to what the state government had organised on September 1.

“I don’t know why this programme is being organised.... Would anyone come for it?” asked a BJP insider. “The central government could have done so much to showcase how its efforts played an important role in getting Unesco’s recognition.... They did nothing and allowed the state government to take all the credit,” a state BJP office-bearer said.

According to him, the central leaders have failed to realise the impact of Durga puja in Bengal politics and that was why they didn’t make any efforts to use the opportunity. The saffron camp in Bengal has repeatedly targeted Mamata over a 2017 state government order, which imposed restrictions on idol immersions to ensure the smooth passage of Muharram processions.

The BJP leadership has repeatedly cited this order and claimed that the chief minister had banned Durga puja. On Thursday, when Mamata began inaugurating pujas in parts of Calcutta, Lekhi made this allegation yet again.

"All these comments didn't have any impact... The fact is, we have failed to make any mark during the Durga puja and that's one of our weaknesses," said a source.

In 2019, union home minister Amit Shah had come to Calcutta to inaugurate a Durga puja in Salt Lake. In 2020, Bengal BJP started organising a puja under its banner, which was virtually opened by Prime Minister Narendra Modi. Though the puja is being organised this year as well, it has not created any excitement among party workers. BJP's national vice-president Dilip Ghosh acknowledged the fact that the center has not done much to take credit for Durga puja's UNESCO recognition.

However, he said that it was never the intent of the union government.

"The center has the biggest contribution behind this recognition, of course with the help of experts. But what has the state done apart from all the hullabaloo? The union government took all the pain because it thought it was its duty and responsibility. It doesn't want to take credit for it," Ghosh said.

Trinamul spokesperson and Rajya Sabha member Santanu Sen said the BJP is rattled by the way Bengal's people have appreciated Mamata Banerjee's efforts to celebrate the UNESCO recognition. "They are upset that they couldn't stop the puja even after moving court (against the state's decision to disburse doles amongst puja organisers). This is why they are trying to eat into our chief minister's credit."