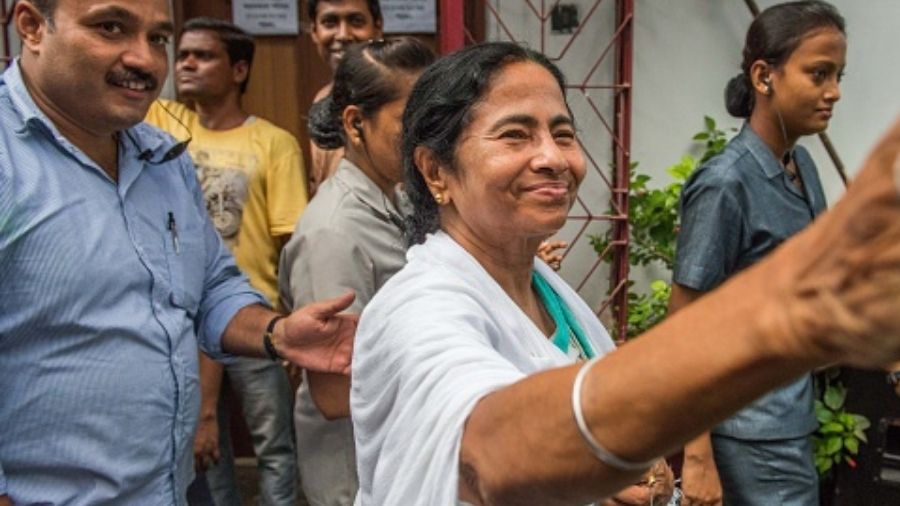 The Trinamul Congress is looking to sweep the Bengal elections, winning two seats and with leads in 210 of the 292 Assembly seats as per the latest trends, while the BJP, which was running neck-and-neck initially, is ahead in only 79 seats.

As for the Samyukta Morcha, the Left-led alliance, Congress is ahead in one seat. Independents are leading in two seats.

With 294 seats in Bengal, the magic figure to form the government in the state is 148.

At Nandigram, however, Mamata was locked in a tight contest with the BJP's Suvendu Adhikari. As of 6.10pm, the Election Commission reported that she was trailing by over 9,500 votes.

Earlier, there were reports that Mamata had won by 1,201 votes, although this was not officially confirmed by EC.

But the Trinamul camp was always confident that Didi would ultimately prevail.

Trinamul supporters could not march ahead to Mamata’s Harish Chatterjee Street residence _ it is heavily barricaded _ but chose to celebrate on nearby roads with green abir -- the party colours.

In 2016, Trinamul had won 211 seats and by the end of the day on Synday, it could well reach closer to that figure.  In Asansol South, for example, the BJP’s lead after three rounds was a mere 600 votes. Likewise, the Congress was leading in Purulia’s Baghmundi by a similar margin after only two rounds.

Trinamul is second in both the seats.

In Mamata’s erstwhile constituency, her party nominee Sobhandeb Chattopadhyay is ahead of the BJP’s Rudranil Ghosh by nearly 3,000 votes. “We are coming back to power with a comfortable majority. I am confident our party leader will win too,” Chattopadhyay told newspersons.

At Sitalkuchi, where five people were killed after Central forces opened fire on the day of voting, the BJP was leading with 32,734 votes.

In the Trinamul stronghold of Murshidabad, the sitting Berhampore MLA, Manoj Chakraborty, is trailing behind the BJP nominee by over 13,000 votes after five rounds of counting.

Other ministers in the incumbent government, Subrata Mukherjee, Aroop Biswas, Sobhandeb Chattopadhyay and Sadhan Pande, are also leading in their constituencies.

An emotional day after fighting the world’s most destructive force, MO-SHA’s BJP. Filthy campaign aided by agencies and shameless EC. A momentous day for India & Bengal. It is understandable that we are euphoric but we also know that during #Covid we have to celebrate responsibly

In Siliguri, the CPM veteran and sitting legislator Asok Bhattacharya is in the third position, behind Shankar Ghosh of the BJP and Trinamul’s Om Prakash Mishra.

JNU students’ union president Aishe Ghosh is in third position at Jamuria. In Bally, another prominent Left face is trailing behind Trinamul and BJP nominees.

Three prominent BJP nominees, including two MPs Babul Supriyo and Locket Chatterjee, were trailing in Tollygunge and Chinsurah respectively, while the turncoat former minister in the Mamata government, Rajib Banerjee, was also trailing in Domjur.

Chief minister Mamata Banerjee is at her 30B Harish Chatterjee street monitoring the election trends and the Covid situation in the state.

Voting: held over eight phases from March 27 to April 29

In Bengal, chanting Hindu scriptures from the dais during an election campaign rally was unheard of. Yet in 2021, chief minister Mamata Banerjee ended all her campaign rallies and roadshows reciting shlokas. That’s what her principal rival, the mighty BJP, has managed to do to the chief of the ruling Trinamul Congress in what has been a hard-fought, no-holds-barred campaign.

In 2019, the BJP bagged 18 of 42 Lok Sabha seats and thus gained a lead in 121 Assembly seats, just 27 short of the simple majority. Large-scale defections of Trinamul legislators to the saffron party including top leaders like Suvendu Adhikari and Rajib Banerjee has put them closer to the seat of power in Bengal _ or so the BJP thinks _ provided it is able to build on the gains of 2019 and expand further.

This is also the first time that a sizeable number of turncoats are contesting the polls on a BJP ------- how many approximately --- or Trinamul ticket --- how many.

After the 2019 Lok Sabha losses, the Trinamul Congress government launched several outreach programmes like Duarey Sarkar (government at the doorstop), Paray Paray Samadhan (resolving issues in the neighbourhood) and Swastha Sathi, a health insurance scheme where the medical card is handed over to the oldest woman member of the family.

Polarisation on religious lines was something that Bengal has managed to keep at abeyance in its post-partition political history. The undercurrents existed, but communal fears and scaremongering were not the tactics deployed by political parties.

With the decline of the Left and the Congress, politics of polarization has taken root and both the BJP and the Trinamul Congress have indulged in it. Mamata Banerjee has wooed the Hindus by chanting shlokas and harping on her Brahmin roots, while at the same time she has kept the scare of the National Register of Citizens alive in Muslims to convey that only she could protect them. The State has a 27% minority population, according to the 2011 Census.

On the other hand, the BJP has been vocal about implementing the Citizenship Amendment Act, a cause of fear for the Muslims, as seen in Assam. As for the Congress and the Left Front, which are fighting the elections in an alliance, they tied up with the Indian Secular Front launched by Furfura Sharif peer Abbas Siddique just before the elections.

Identity politics reared its head from 2006 onwards when land acquisition by the then Left Front government was seen as an attempt to hurt the farmers in parts of East Midnapore and South 24-Parganas, mostly Muslims. After the Trinamul Congress came to power, it began to woo other communities as well, like the Matuas, Hindu migrants from Bangladesh. The BJP has promised to implement the Citizenship (Amendment) Act if it is voted to power, with the Matuas in mind.

In the last 10 years, identity politics has been at the forefront of many of Mamata Banerjee’s development schemes, like the numerous boards that she has formed for residents of Darjeeling hills, the Gorkhas, Lepchas and others.

Never before did the Bengal electorate go to vote keeping in mind the religious identity. Like in other parts of North India, the BJP and its whisper campaign of ‘Hindu khatre main hai’ has now become a part of the politics in Bengal too.

In the fourth phase of polling at Sitalkuchi Assembly segment number 5 in North Bengal’s Cooch Behar district, central forces opened fire, killing four people. The forces maintained that they fired in self-defence, a claim the Trinamul government rubbished. There are fears of violence after May 2, but according to a preliminary count, more than 20 people have lost their lives since the Model Code of Conduct came into force with more than 30 candidates attacked during the campaign.

Jobs, industry: The Trinamul Congress manifesto says it will provide a “minimum basic income” to 1.6 crore families, give financial assistance to farmers and in the next five years “uplift an additional 35 lakh people from extreme poverty.” The BJP promised development for a ‘sonar Bangla’, 33% reservation for women in government jobs and implementation of CAA. The Left manifesto harped on jobs and industry.

CAA, NRC: The BJP’s push for the CAA and NRC has helped party keep the communal cauldron boiling. The treatment meted to Hindi Bengalis in the neighbouring state of Assam (where the BJP is in power) since the NRC came into effect has not cut much ice. The Muslims, about 27 per cent of the population, feeling threatened are holding on to Mamata, leaving even the traditional Congress vote depleted.

Syndicate and corruption: Narendra Modi introduced “syndicate” into the national political lexicon this election season, referring to the organised system of controlling businesses and supplies in construction work that stated during the Left days and has found widespread patronage under Mamata in all spheres of life. Since 2014, the BJP has been talking about the Saradha scam and later the Narada sting operation but little action has been taken. Many of those accused in the two biggest corruption cases in Bengal are now in the BJP.

Teacher recruitment: For seven years, youths who have qualified for teaching jobs after clearing the Teacher’s Eligibility Test have been waiting for appointments. In between, the results were quashed by Calcutta High Court for irregularities in the selection process.

Amphan Cyclone relief: On May 20, 2020, super cyclone Amphan made landfall in Bengal. The state government announced a Rs 6.250crore relief package, with a house-building assistance of Rs 20,000 each to five lakh families. Villagers in many of the devastated blocks alleged, only those close to the ruling party at the panchayat level were compensated.

Chief minister Mamata Banerjee remains the biggest draw of the polls, contesting from the sensitive Nandigram, where the BJP has fielded her one-time aide Suvendu Adhikari.

The BJP state president Dilip Ghosh is also contesting the polls, so is the party’s national vice-president and another turncoat Mukul Roy. Both the BJP and Trinamul have fielded a number of starlets, filmmakers, singers adding more glamour than substance to Bengal politics.

The Left on the other hand has brought in a fresh perspective by giving tickets to its leaders from the various frontal organisations like the JNU students’ union president Aishe Ghosh, Dipsita Dhar, the joint secretary of the CPM’s students wing (both in their 20s), Minakshi Mukherjee, the state president of the CPM’s youth wing and others, along with veterans like former MPs Mohamamd Salim and Sujan Chakraborty.

Khela hobe (Game is on).

However rough they play we will stop only after hitting the goal. Whatever needs to be done to form the government in 2021, we will do that

I am a pure cobra, can kill in one bite