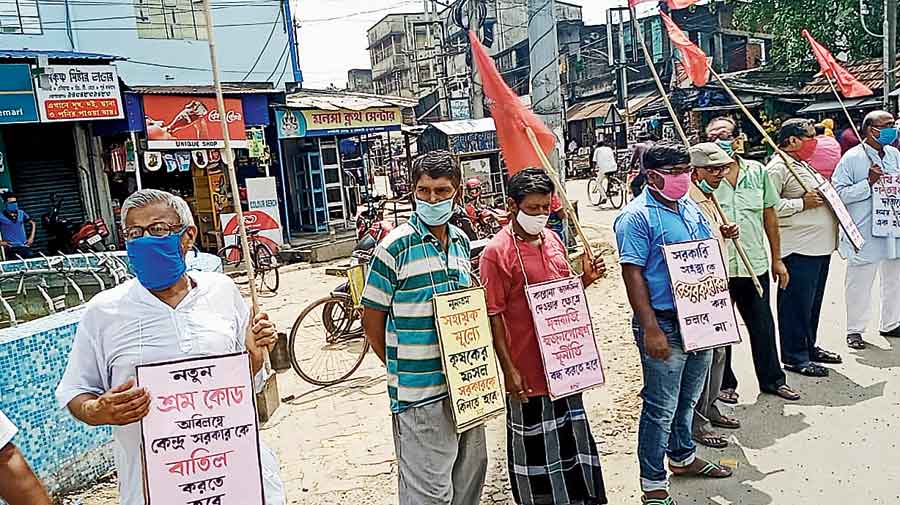 Bengal peasants showed their solidarity with the farmers’ protest on the Delhi borders that completed seven months on Saturday.

State farmers joined the nationwide protest to “save democracy” from the “clutches” of the Narendra Modi government and “save agriculture” by strengthening the demand to repeal the Centre’s three contentious farm laws.

While the Left-backed All India Kisan Sangharsh Coordination Committee held a two-hour protest at Sidhu Kanu Dahar in Calcutta, farmers led by the CPM’s All India Kisan Sabha (AIKS) took the demonstration to the interiors.

Convener of the All India Kisan Sangharsh Coordination Committee and AIKS state secretary Amal Halder said the protest was held at 125 points in rural Bengal.

“June 26 is the birth anniversary of Kisan Sabha founder Sahajanand Saraswati and the farmer protest completed seven months. Although the main protest was held in Calcutta, we held demonstrations inside rural Bengal to connect farmers of the state with the all-India movement,” said Halder.

The protest coming a day after the anniversary of the Emergency, Halder said: “Modi has imposed another kind of Emergency on us, evident with his government not listening to farmers for seven months.”

East Burdwan, the rice bowl of Bengal, held the most number of protests, 50. Abhijit Mondal, a farmer in East Burdwan’s Galsi who took part in the protest, said: “As farmers struggle to survive amid the pandemic, the farm laws seek to open gates to corporate loot.”

In Calcutta, ISF leader and Bhangar MLA Naushad Siddiqui and his supporters were arrested from Mayo Road while  expressing solidarity with the farmers’ movement and protesting against alleged incidents of post-poll violence. Police said they did not have permission for the assembly. AIKS leader Tushar Ghosh slammed the police for “highhandedness”.