The J.P Nadda-led party had won seven of eight Lok Sabha seats and secured lead in 38 Assembly segments in the 2019 general election 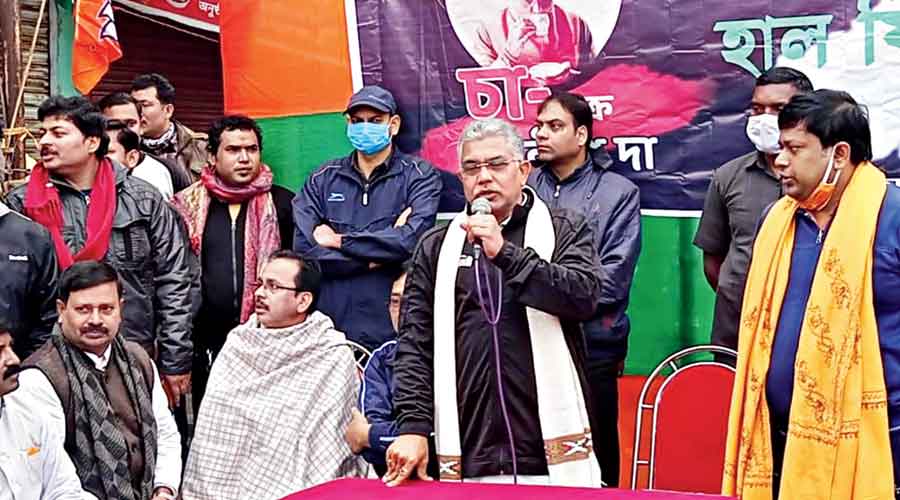 State BJP president Dilip Ghosh said on Monday that the party would pull out all stops to win 50 seats in north Bengal in the next Assembly elections.

The BJP had won seven of eight Lok Sabha seats and secured lead in 38 Assembly segments in the 2019 general election.

“In north Bengal, we will win 50 Assembly seats. Our leaders and workers at different tiers are toiling to ensure the party’s victory in these seats. People of the region had extended overwhelming support to us in 2019. We had won seven Lok Sabha seats and missed the eighth by a meagre margin,” said Dilip Ghosh.

There are 54 Assembly constituencies in north Bengal.

Ghosh, who is touring north Bengal, attended an interactive programme at Gangarampur in South Dinajpur on Monday morning.

Later, he addressed a public meeting in Patiram, on the outskirts of Balurghat. Over 100 workers from other political parties joined the BJP at the event, claimed party leaders.

Speaking at the meeting, the BJP state chief said his party didn’t want imposition of Article 356 of the Constitution in Bengal.

“We feel the imposition of the article will benefit the BJP….. it is not our party but Mamata Banerjee who wants it. Nowadays, she is trying to gain people’s sympathy but such tactics will not work,” said Ghosh.

That the BJP is focussing on north Bengal is evident from a series of activities the party undertook in the region in recent times. Last month, a series of internal meetings were held in Siliguri where new posts were created to monitor political activities and assess the situation, right up to the booth level.

The chief judicial magistrate’s court in Jalpaiguri on Monday sought the post-mortem report of BJP supporter Ulen Roy from police.

Roy had died from pellet injuries on December 7 after a clash had broken out in Siliguri during a protest march by the BJP.

“The court said the post-mortem report should be placed before it on Tuesday,” said Soujit Singha, the lawyer representing the deceased man’s family.