Now you can book space to park your car in New Town on your smart phone before you leave home, says Brinda Sarkar 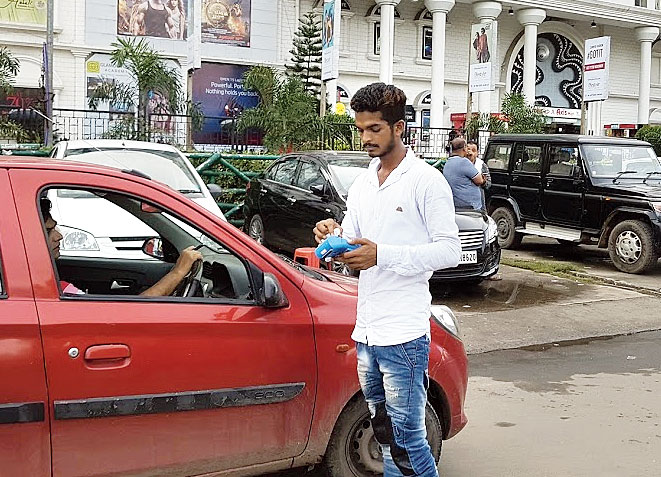 Do you get frustrated at the thought of heading to a mall on Sundays because you know you won’t find parking space? In New Town, the authorities have facilitated a smart parking system whereby you can reserve space for your car at parking zones before you even leave home.

“While floating our tender for parking agencies this time we inserted a clause requiring the agencies to use a smart parking app,” says Debashis Sen, chairman of New Town Kolkata Development Authority (NKDA), that is in charge of the designated parking zones in the township. “This will help car owners assess the parking situation of an area before reaching the spot, the agencies will achieve transparency in their dealings and NKDA will have data for revenue monitoring. It’s a win-win.”

Parking agency A.K. Gems has won the 11-month contract for 109 car spaces outside Axis Mall, 130 spaces around DLF Gate Number 5 (behind Coal India) and 100 spaces between Coal India and Nazrul Tirtha. They have tied up with the app Park24x7 for the service.

“This is probably the first street in the city with this range of parking services,” says Kalyan Bhattacharya, a director of A.K. Gems. “The system is useful and the interface simple. Our attendants picked it up in a day.”

The attendants have been given smart phone-like touch-screen gadgets, into which they key in a car’s
registration number when they enter the parking lot. Out comes a printed slip with the date, time, the car’s registration number, and a unique QR code.

The car is then free to park. When leaving, the attendant would scan the QR code on the slip or enter the car’s registration number. The app would calculate the duration of stay and corresponding fee and a new slip would get printed out with these details. The car owner may pay in cash or through an e-wallet if he had booked the space through the app.

Parking attendants like Pranab Mistry are happy with the tech turn. “People ride cars worth Rs 10 lakh but haggle over Rs 10 for parking. They don’t believe the rates we tell them, deny having stayed for as long as we have recorded… such problems have got eliminated due to this digitisation,” said Mistry, who mans the space outside Axis Mall.
The agency started operations with the smart parking app on

August 16 and proprietor Amanat Housen Khan says they will provide bright green uniforms and ID cards to the attendants too. “Since we’re introducing such a sophisticated system, we want our attendants to look the part too. Car owners should be able to identify them easily,” he says.

Avishek Tarafdar, founder and CEO of Park 24x7 Technologies, says that once the system is ironed out, attendants will have real-time information on the number of spaces occupied, those getting pre-booked through the app etc. Car riders who have downloaded the Park24x7 app would be able to see this information and reserve space too.

In case the car owner does not have the app he can park the regular way but the parking attendant’s device would record his movement and the information would be available to other app users.

“We launched our app nation-wide last year but New Town is the first place in Calcutta that will allow car users to book space on street sides. Before this they could only book space in private parking plots,” says Tarafadar.

Calcutta Co-operative Fee Car Parking Society is the agency that has got the contract for 130 car and 100 bike spaces next to Tata Medical Center. “We had the contract here last year too and for the past three months were running a pilot project with Park24x7 here,” says Bijoy Gupta of the agency. “It’s quite simple, although it’s a burden on us since we have to pay the app a fee for their services,” he adds.

Car owners are happy. “It’s a very good system,” said Sumit Sarkar who had driven to Axis Mall on Sunday from BL Block in Salt Lake. “If an app can tell us beforehand that parking is full at a one mall, we can drive to another. It saves us trouble. This digitised system also eliminates frauds like fake parking tickets. Such high tech innovations are just what one expects from a smart city like New Town.”