Apolitical forums take up Gorkhaland cause 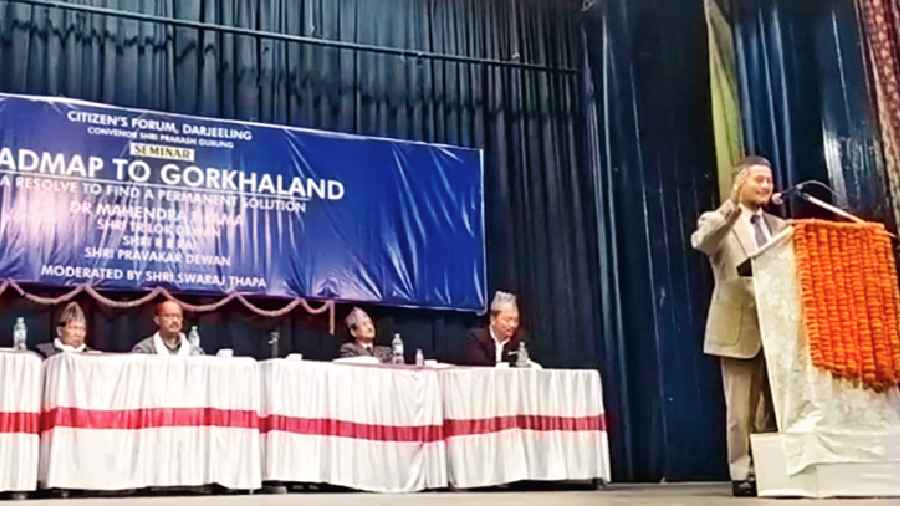 The seminar on Gorkhaland organised by Citizen’s Forum in Darjeeling on Tuesday
Sourced by The Telegraph
Vivek Chhetri   |   Darjeeling   |   Published 11.05.22, 01:37 AM

Apolitical forums in the hills are now raking up the Gorkhaland demand in Darjeeling.

After the statehood agitation of 2017 — in which 13 people were killed, including two police personnel — no major political party has actively taken up this issue.

On Tuesday, the newly formed Citizen's Forum held a seminar titled “Roadmap to Gorkhaland '' at the Gorkha Dukha Niwarak Sammelan(GDNS) hall, which was packed to the brim for full five hour s.

Political personality Raju Pradhan, who recently quit the BJP, and is part of the Citizen's Forum, said: “There is a need for this kind of a seminar is because of the doings of the political parties (allegedly silent on Gorkhaland). We will now breathe down the necks of political parties.”

Pradhan stated that they would start statehood demand-centric activities across the country, not just Darjeeling.

Of late, a number of apolitical forums started raising the statehood issue.

Even though Citizen’s Forum presented an apolitical face, it had many with a political past. Most prominent faces were earlier associated with the Bimal Gurung camp of the Gorkha Janmukti Morcha. Pradhan, Thapa and Trilok Dewan were at one time with Gurung. Prakash Gurung, who recently quit as president of Gurung’s youth wing, and Yogendra Rai, former Sabha member of Gorkhaland Territorial Administration were present on the dais.

“It needs to be seen whether the Citizen’s Forum remains strictly apolitical," said an observer.