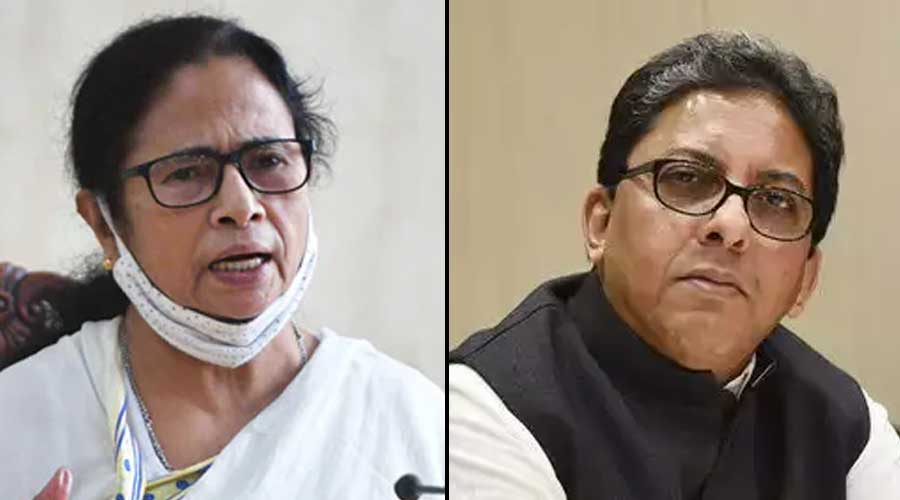 The Centre, in a surprise move, had on May 28 night sought Bandyopadhyay's services and asked the state government to immediately release the top bureaucrat.
The Telegraph Online
Our Bureau, Agencies   |   Calcutta   |   Published 31.05.21, 06:03 PM

West Bengal chief secretary Alapan Bandyopadhyay retired from service on Monday amid a tussle with the Centre with chief minister Mamata Banerjee announcing that he would now work as Chief Adviser for the next three years to help the state government tide over the Covid pandemic.

“The Centre has asked him to join North Block on Tuesday, but it cannot force an officer to join it without the permission of the state administration,” Mamata told a press conference.

"The CS got a letter from the Centre asking him to join North Block by tomorrow (Tuesday). This is not a reply to my letter but to the CS. I have not received any reply from it to the letter which I had sent earlier today (Monday)," she said.

The central government's decision is unilateral and unconstitutional, the chief minister claimed. "We are not relieving him. He has superannuated today (Monday), but he will act as the chief advisor to the CM for the next three years," Mamata said.

H.K. Dwivedi has taken over as chief secretary, she added.

"They have given no reason. I am shocked. I have decided we need his service for the Covid pandemic. For Covid and for Cyclone Yaas, he must continue his service to the poor, the state, the country, the affected people..." Mamata said, according to ndtv.com.

"If a bureaucrat is insulted after he has dedicated his life to his work, what message is the government and PM sending out? Are they bonded labourers? There are many Bengali cadre officers at the Centre. Can I recall them without consultation, Mr Prime Minister? Mr Busy Prime Minister? Mr Mann-ki-baat Prime Minister?"

“PM, Amit Shah behaving like autocrats such as Hitler, Stalin,” she added.

Earlier in the day, Mamata wrote to Prime Minister Narendra Modi, requesting him to withdraw the Centre's order recalling chief secretary Alapan Bandyopadhyay, and said her government "is not releasing" the top bureaucrat.

In a five-page letter, Mamata urged the prime minister to reconsider the Centre's decision to recall the chief secretary after giving him a three-month extension.

Mamata said she was shocked by the Centre's decision and termed the order as "unilateral", which was issued "without any prior consultation" with the state government.

"This so-called unilateral order is an unreasoned volte face and by your own admission, against the interests of the state and its people.

"I humbly request you to withdraw, recall, reconsider your decision and rescind the latest so-called order in larger public interest. I appeal to your conscience and good sense, on the behalf of the people of West Bengal," she said in her letter to PM Modi.

She also said, "The West Bengal government cannot release, and is not releasing its chief secretary at this critical hour, on the basis of our understanding that the earlier order of extension, issued after lawful consultation in accordance with applicable laws, remains operational and valid."

The Centre, in a surprise move, had on May 28 night sought Bandyopadhyay's services and asked the state government to immediately release the top bureaucrat.

Bandyopadhyay, a 1987-batch IAS officer of West Bengal cadre, was scheduled to retire on Monday after completion of 60 years of age. However, he was granted a three-month extension following a nod from the Centre to work on COVID management.

Referring to the Centre's May 24 order granting extension to Bandyopadhyay for another three months after his scheduled retirement on Monday, Mamata said, "I presume that the said order of granting extension as chief secretary, issued after mutual written consultations and on the basis of the reasons deliberated upon during such consultations in accordance with due process, stands and ought to stand in any case.

"In this regard, I seek your kind confirmation in public interest and in the larger interests of the people of the state of West Bengal in these difficult times."

She also mentioned in her letter that the "all-India services and the laws, including the rules framed for it, have federal cooperation as the cornerstone of its legal architecture".

Mamata said the aim of the all-India services has been to "protect and give greater cohesion to the federal foundations" of the Constitution.

"With unilateral and non-consultative orders being issued, the federal system is gravely endangered and severely undermined. If a chief secretary of a state can be asked to be relieved like this how can the lower bureaucracy take, obey and implement orders in their letter or spirit from the chief minister, other ministers and officers.

"I presume and hope that you do not want to damage the federal amity... and destroy the morale of all the All India Service officers working in various states," she said.

Expressing her anguish in the entire episode of recalling Bandyopadhyay even after granting him a three-month extension, the Bengal CM questioned whether the decision has any connection with her and the chief secretary's meeting with the PM at Kalaikunda in Paschim Medinipur district on May 28.

"I really and sincerely hope that this latest order is not related to my meeting with you at Kalaikunda. If that be the reason, it would be sad, unfortunate and would amount to sacrificing public interest at the altar of misplaced priorities."

In a communique to the state government, the Personnel Ministry on May 28 said the Appointments Committee of the Cabinet has approved the placement of the services of Bandyopadhyay with Government of India as per provisions of the Indian Administrative Service (cadre) Rules, 1954, "with immediate effect".

It also directed Bandyopadhyay to report to the Department of Personnel and Training, North Block, New Delhi by 10 am on Monday.

The order came on a day when the prime minister visited Odisha and West Bengal to review the situation and damages caused by cyclone 'Yaas'.

Mamata had on Saturday called the Centre's decision to recall Bandyopadhyay as "unconstitutional" and "illegal", and appealed to the Union government to withdraw its order.

She had a brief meeting with the prime minister at the Kalaikunda airbase where she handed over a memorandum on the post-cyclone situation.

The BJP leaders later accused her of cutting short the planned review meeting.

Leader of the opposition in West Bengal assembly Suvendu Adhikari had on Saturday alleged that Mamata and the chief secretary have insulted PM Modi by not attending a meeting chaired by him to discuss the ravages caused by the cyclone 'Yaas'.