Thousands of women march at Mamata rally in Siliguri

The party is flagging the hike in the price of LPG cylinders, an emotive issue TMC believes can help drum up support of 'mothers and sisters' 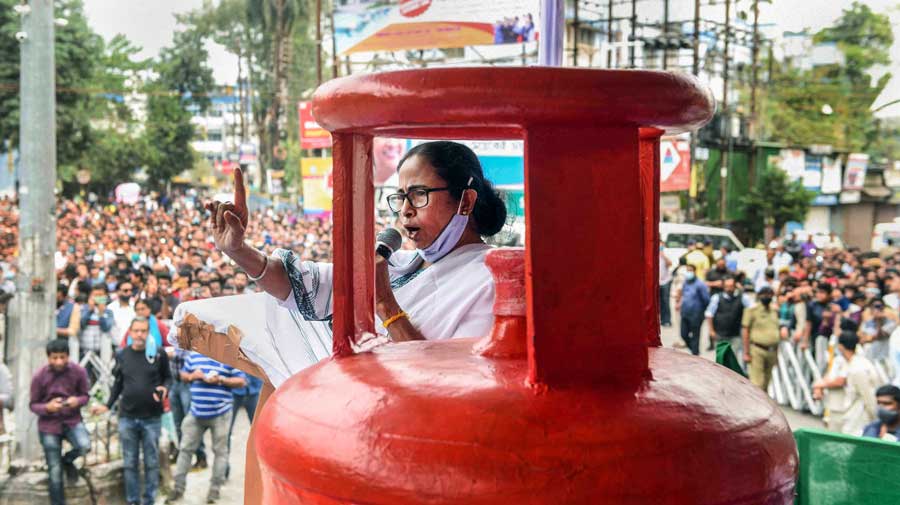 Mamata Banerjee speaks during a rally against the hike in fuel and LPG prices in Siliguri on Sunday.
PTI
Avijit Sinha, Bireswar Banerjee   |   Siliguri   |   Published 08.03.21, 12:43 AM

Thousands of women came out on the streets of Siliguri on Sunday to march with Trinamul supremo Mamata Banerjee and other women leaders of her party in protest of the LPG price hike.

In the run-up to the crucial Bengal polls, Mamata Banerjee and her party leaders have been focusing on women voters who form almost 50 per cent of Bengal’s voters. The party is flagging the hike in the price of LPG cylinders, an emotive issue Trinamul believes can help drum up support of “mothers and sisters”.

That the strategy worked, at least for now, was evident from Sunday’s crowd of 50,000-odd among whom 75 per cent were women.

Some party supporters carried a giant model of a cylinder throughout the rally from near Mainak Tourist Lodge to Hashmi Chowk, covering 2.8km along Hill Cart Road.

“In January 2020, the chief minister marched on the same route in protest of the  NRC and CAA with around 35,000 people. But today, the larger crowd proves this LPG issue has struck a chord among women,” an observer said.

On the dais at Hashmi Chowk, where Mamata spoke in front of the backdrop of the slogan “Mahilara Didir Sathe” (women are with Didi), the audience heard out Mamata and other women leaders. The sole male speaker was minister Gautam Deb. Mamata also spoke on welfare schemes her government floated for women and drew parallels with BJP-ruled states on law and order and women’s safety.

Nusrat, in her speech, spoke about the struggles of Mamata and how the chief minister has worked for empowerment of women.

Mimi, on the other hand, was short and underlined the slogan “Bangla Nijer Meyekei Chay” (Bengal only wants its daughter). Both drew huge applause from the audience.

“The planning of the entire event was meticulously made to reach out to the women voters. Those in the saffron camp might have slammed the state government here over law and order issues but are yet to come up with such a specific strategy to draw support,” said an observer.