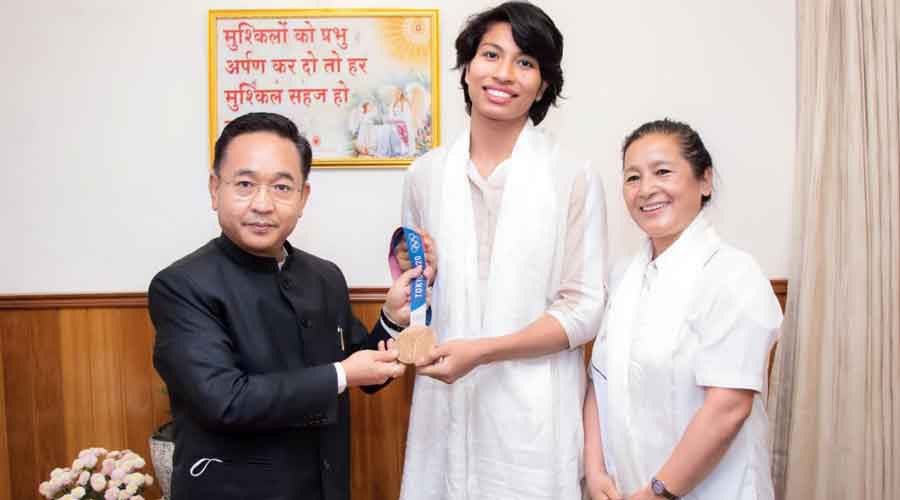 From being paralysed as a teenager, to taking up boxing at a late stage and coaching her ward to a podium finish at the Olympics, Sikkim’s Sandhya Gurung, 50, has led an extraordinary life.

Now, Sandhya,  the coach of Tokyo Olympics bronze winner Lovlina Borgohain, is set to become Sikkim’s first Dronacharya Award winner. She will get the country’s highest award for sports coaches on November 11 at the Rashtrapati Bhavan.

Lovlina, who is from Assam will also get the Major Dhyan Chand Khel Ratna Award, the highest award for sportspersons in the country.

“It is a great honour for me. I am proud of having chosen this field and for becoming successful in my teaching,” said Sandhya.

The coach’s life story is inspiring.

“I had met with an accident and was paralysed for three years as a teenager. I recovered and got married in 1989. Eleven years later,  I took to boxing in 2000,” Sandhya  said. Her husband Manoj Kumar Limbu, a contemporary of former Olympian boxer Jas Lal Pradhan, had initiated her to boxing.

She could not reach Olympian heights as a boxer. But she did take part in national and international tournaments between 2000 and 2008, winning in some.

Bowing out of the ring in 2008, she decided to take up coaching and enrolled for one-year diploma’s course in boxing at the Sports Authority of India’s Netaji Subhas Eastern Centre in Calcutta with support of Sikkim sports department and then sports minister and present chief minister P. S. Tamang (Golay).

“I started coaching from 2010. I am attached with the National Boxing Coaching Camp with Elite Women at the Indira Gandhi Stadium in New Delhi,” she said.

Sandhya first met Lovlina at a sub-junior boxing camp in 2012, and since 2016, the “shy girl” from Baromukhia village in Assam, has been under her wing.

Lovlina is now in Gangtok to meet her tutor. They both met Golay on Thursday.

“You all should feel blessed to have a coach as good as her (Sandhya),” said Lovlina, referring to Sandhya's present students.

Golay has announced a reward of Rs 10 lakhs to Lovlina and Rs 5 lakhs for Sandhya for being conferred with the awards.