54 athletes, 19 medals and a bouquet of inspiring stories round off India’s campaign 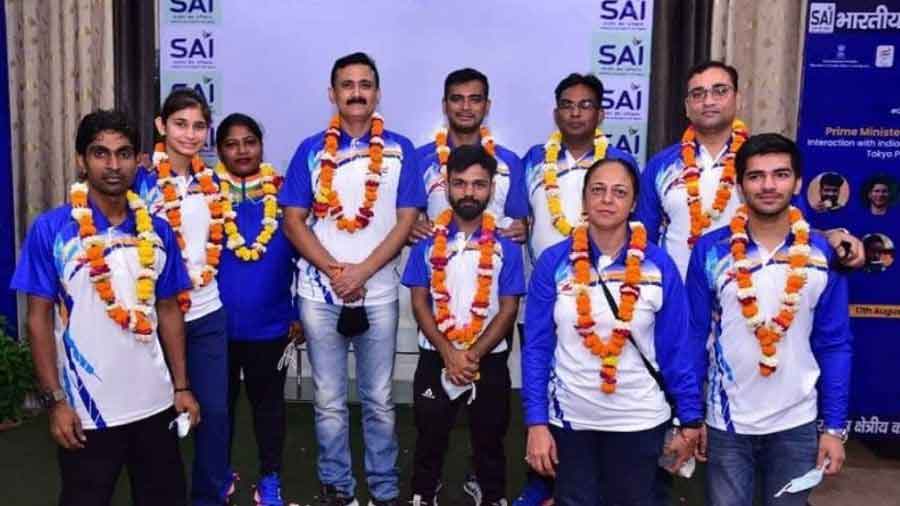 Indian shuttlers claimed four medals, including two gold, a silver and a bronze, at the Paralympics where badminton made its debut this year.
Twitter
Our Bureau   |   Calcutta   |   Published 06.09.21, 12:52 AM

India might have just taken a big step towards attaining maturity as a sporting nation in the last couple of months, during which it’s Olympians and Paralympians have managed to steal a major share of the country’s attention despite the usual onslaught of cricket. Somehow they have succeeded in pursuing the countrymen that there is sport beyond cricket and heroes beyond cricketers.

As the Tokyo Paralympics folded on Sunday, India embraced its new champions who etched their names in history with an unthinkable tally of 19 medals. That’s seven more than what the nation had earned from in Paralympics from 1968 to 2016.

That this high follows India’s best-ever showing in Olympics perhaps points at the fact that the improvement in our sporting standards is real and not really a flash in the pan. Sustaining the development is another matter though and only future will have an answer for that.

India finished at the 24th place, the highest-ever, in the medals tally. There were medals on the last day of the Games too with shuttlers Krishna Nagar and Suhas Yathiraj clinching gold and silver respectively in different categories.

The country had sent its biggest-ever contingent — 54 — to the Tokyo Paralympics and 17 of them have bagged medals. Shooters Avani Lekhara and Singhraj Adana stood taller with two individual medals each. But all of them, even the ones who did not get medals, are winners in life where they overcame innumerable challenges succesfully.

The 19-year-old Lekhara, who became the first Indian woman to win a Paralympics gold, was deservedly the flag-bearer at the closing ceremony on Sunday.

Sunday’s medallists for India, Krishna and Suhas, ensured that the campaign ended on a sweet note.

The 22-year-old Krishna defeated Hong Kong’s Chu Man Kai 21-17, 16-21, 21-17 in the men’s singles SH6 class final to clinch India’s second gold in badminton after Pramod Bhagat had won the yellow metal in the SL3 class on Saturday. This was the first time that badminton was being played at the Paralympics.

Krishna, who has height impairment, picked up the sport after being encouraged by his cousin. The world No.2, who comes from a middle-class family in Jaipur, was just two years old when his medical issue was identified.

“This is a dream come true… Competing in the Paralympics is a big achievement and we won medals in the first edition itself. We are blessed, it is a great achievement,” Krishna said.

Suhas, who also happens to be the district magistrate of Noida, lost the men’s singles SL4 class final 21-15, 17-21, 15-21 to two-time world champion Lucas Mazur of France and had to settle for silver.

The 38-year-old, who has an impairment in one of his ankles, had mixed feelings.

“It’s a very emotional moment. I have never been so happy and so disappointed in my life at the same time. Most happy because of the silver medal but most disappointed because I missed the gold medal by a whisker,” he said.

In SL4 class, shuttlers have lower limb impairment/severe and they play standing.

A computer engineer, Suhas became an IAS officer in 2007 and was at the forefront of the fight against the Covid-19 pandemic as Noida’s district head.

Speaking about how he managed to prepare for the Paralympics while doing his duty as a government official amid the pandemic, Suhas said: “I have given importance to fitness wherever I was. I couldn’t practice much but I still maintained fitness.”