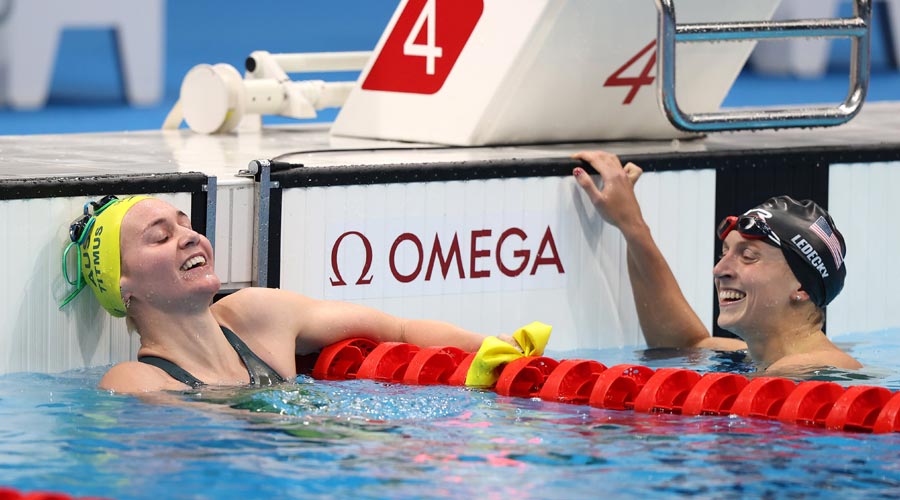 Ledecky has been the dominant force in women’s swimming in recent years but in the first of three head-to-head showdowns with Titmus at these Games it was the Australian who triumphed with a superbly timed swim.

Britain’s Adam Peaty delivered another dominating swim to repeat his gold medal success from Rio in the 100m breaststroke while Canadian Maggie MacNeil stormed to victory in a close women’s 100m butterfly and the US triumphed in the men’s 4x100m relay.

The first mouth-watering match-up between Ledecky and Titmus exceeded all expectations. The American great was 0.66 seconds ahead at the halfway point but Tasmanian Titmus, described by her father Steve as being “as tough as David Boon”, then began to reel her in, closing the gap to 0.16 seconds by the 300m turn, grabbing the lead at the 350m mark and powering home for gold.

While Titmus lit up the pool, when it comes to celebrations it was her wide-eyed, hip-thrusting coach Dean Boxall who deserved an Olympic gold.

While the 20-year-old Titmus was being congratulated by her fellow swimmers, the crowd were mesmerised by Boxall as he leapt in the air, tore off his mask and screamed ecstatically, headbanging with his surfer-like hair tumbling around him.

In the men’s 400m freestyle relay, the US delivered an emphatic win, cruising home 1:14 ahead of Italy with Australia taking bronze. 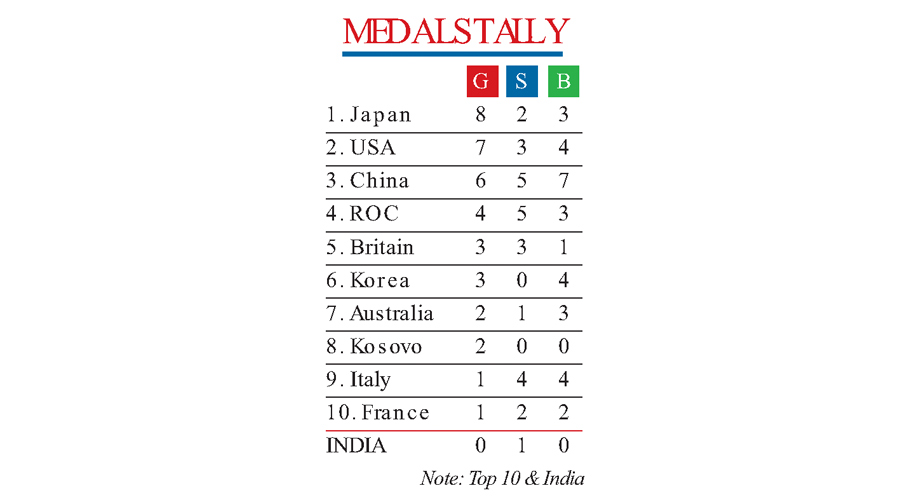 Caeleb Dressel got the Americans off to a flying start and Blake Pieroni and Bowe Becker held onto the lead before Zach Apple’s impressive 46.69 final leg secured victory in a time of 3:08.97.

Britain’s 27-year-old Tom Daley won the gold he has long dreamed of at his fourth Games, in the men’s 10m synchronised platform diving with teammate Matty Lee, ending China’s goal of sweeping all eight diving gold medals on offer.

Novak having a ball

Novak Djokovic is no stranger to social-media attention, but the 20-time Grand Slam champion has been even more visible this week.

The 34-year-old has been a centre of attention in the Games Village, obliging with requests for selfies, sharing meals with others and dispensing advice to seemingly dozens of competitors from other disciplines.

“It’s just so special, you know, it’s so special,” Djokovic said after his second-round win over Jan-Lennard Struff of Germany.

“This happens once in four years. Of course, I try to balance things out with keeping my own but I’m thriving also on that wonderful energy.”

A video of Djokovic sharing some winning tips with Turkish athletes made the rounds over the weekend, along with a photo of him doing the splits with a pair of Belgian women’s gymnasts.

Djokovic declined to say what he had shared with the athletes. But he said he appreciated the chance to interact with other sports figures.